The Patriotic Union of Kurdistan is witnessing a sharp division that could affect the regional government's ability to address Kurdish issues. 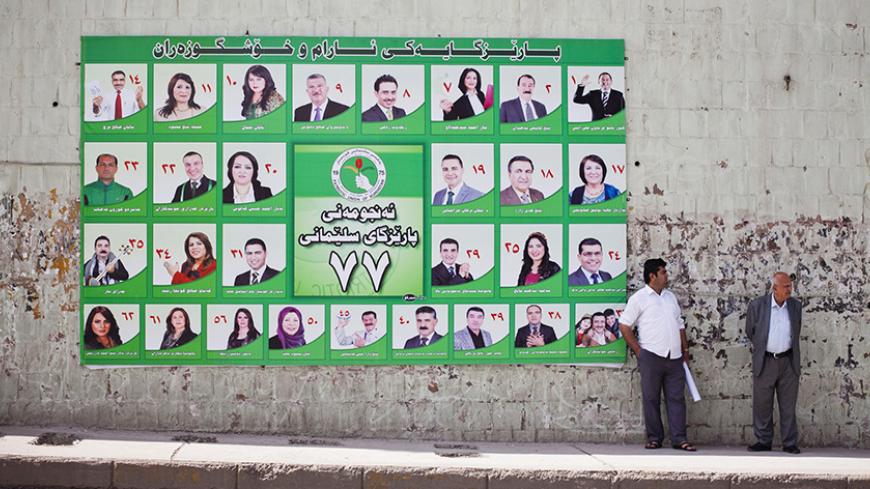 SULAIMANIYAH, Iraq — Infighting between factions of the Patriotic Union of Kurdistan (PUK) could lead to a dead end, but not before calling attention to what dissenters say are reprehensible secret operations of a power-hungry bloc within the political party.

Some believe the battle could have far-reaching repercussions that eventually could lead to the Kurdistan Regional Government's (KRG) being controlled by the Democratic Union Party (PYD), which is thought to be affiliated with the terrorist-designated Kurdistan Workers Party (PKK).

The PUK's two deputy secretary-generals, Kosrat Rasul Ali and Barham Salih, announced Sept. 1 the formation of a "decision-making center" within the PUK, with the support of some senior executive party officials. The idea was immediately rejected by other party leaders, including Hero Ibrahim Ahmed, wife of PUK general secretary and former Iraqi President Jalal Talabani. Talabani no longer effectively leads the party since suffering a stroke in December 2012.

The social-democratic PUK party was already divided for various reasons, most notably management disagreements. Dissenters say the party has been monopolized by a bloc whose self-serving decisions have diminished the party's role and turned it from an effective force into a marginal player.

Moreover, according to the dissenters' statement, this Ahmed-led monopoly dominates the party's financial management and has formed ambiguous alliances, concluding secret deals to loot oil and take over the wealth and properties of the people. As a result of this shadow group's interests, the PUK is no longer following the footsteps of Talabani, who was a founding member, the statement said.

The statement also accused the dominating group of stealing public money, cutting the salaries of civil servants and peshmerga forces, conspiring to rig the outcomes of the General Congress, undermining the will of the original members, and bringing in and imposing these members’ relatives in most of the party’s organs.

The statement said any decision inside or outside the party shall not be deemed a general decision of the party unless approved in advance by the decision-making center.

The center's formation stirred angry reactions. Member of the PUK Central Council Ala Talabani refused to describe the action as a split within the PUK, but challenged the legitimacy of the two deputies, noting they were not elected by the party's members but rather appointed as deputies by Jalal Talabani. According to Xelk media network, Ala Talabani accused the two deputies of "running after privileges and senior positions.”

In the same vein, antiterrorism forces official Lahore Sheikh Genki denounced the center and described it as illegitimate. Also, Central Council member Atta Sarawi accused those behind the center's formation of seeking to take over the PUK and making hasty decisions.

In a dramatic development, Hero Ibrahim Ahmed called on Iraqi Prime Minister Haider al-Abadi on Aug. 19 to stop the country's export of oil from Kirkuk and followed up with a Sept. 7 letter to Abadi criticizing an oil revenue-sharing agreement between Erbil and Baghdad, which she said was made without consulting the PUK. She also denied being involved in any attempts to export Kirkuk oil through Iran.

It should be noted that North Oil Co., affiliated with the Iraqi government, will resume its oil supply to the port of Ceyhan through the Kurdistan pipeline after a six-month halt.

Ahmed's requests could portend the further deterioration of the relationship between the PUK factions and of their relationship with the KRG and its head, Prime Minister Nechirvan Barzani, who is also deputy head of the Kurdistan Democratic Party.

On the other hand, PUK political bureau member Sheikh Jaafar Mustafa said in a Sept. 6 statement to Voice of America that the disputes within the PUK are "related to the theft of the people's wealth and positions," and stressed that the deputies of Jalal Talabani are the legitimate authority.

A leading PUK member who preferred to remain anonymous told Al-Monitor, "These fellow members at the so-called decision-making center body are a minority and have no legitimacy, and therefore they will remain in the dark tunnel they led themselves into. They are too weak to change anything inside or outside the PUK."

On the other hand, PUK Organization Bureau member Sulaimen Abdullah told Al-Monitor, "The decision-making center rejects the accusations of treason. ... We are proud of our identity as members of the PUK, and our goal is to rectify the path of the PUK for a prosperous future of the generations to come. The Kurdistan people deserve a better future, and this will not be achieved without rectifying the PUK's path and its participation in a real political process."

With regard to the center's future, Kurdish affairs expert Rebwar Fatah said, "The decision-making center is helpless because the economic centers are under the control and domination of Hero Ibrahim, and her [faction] will not [easily] give away the extremely large income."

Writer and political analyst Ismail Rwandzioza told Al-Monitor, "The decision-making center is facing a dead end. Those who made this step ... are not united. Eventually, if this situation continues, they will be forced to return to the Talabani family or resort to a split, which I think is the inevitable option."