Multiple arrests in Iran as Rouhani arrives in New York

Iranian authorities appear to be stepping up their crackdown on media workers amid President Rouhani’s arrival in New York to address the UN General Assembly’s annual meeting. 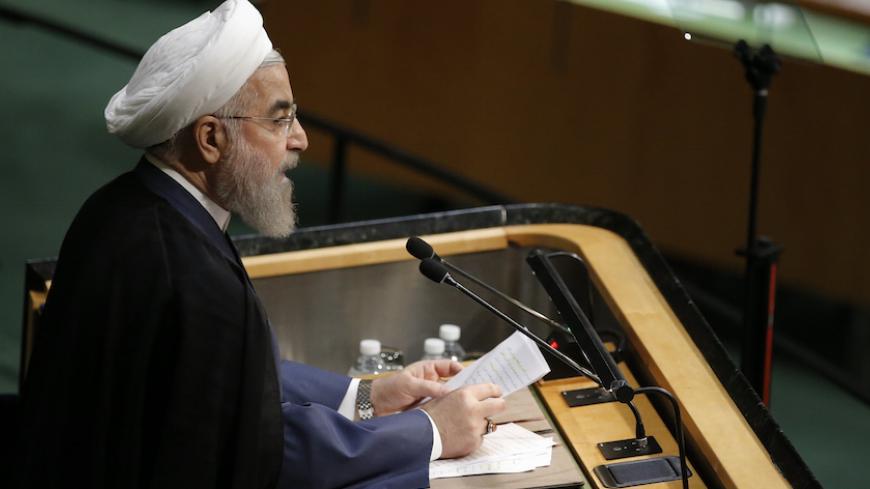 Iranian authorities appear to be stepping up their crackdown on media workers amid President Hassan Rouhani’s just-concluded tour of Latin America and his arrival in the United States to address the UN General Assembly’s annual meeting. On Monday, reports surfaced of the arrest of Sadra Mohaghegh, the society editor of the Reformist Shargh Daily. His sudden detention has caused an outcry among journalists, activists and Iranian netizens, who have turned Mohaghegh’s name into a hashtag — especially after Mohaghegh’s Twitter account was taken down on Tuesday for unknown reasons.

According to Basij News, Mohaghegh was arrested “during an intelligence operation by security forces,” without specifying which agency was responsible for his arrest. Media reports accuse him of having collaborated with "counter-revolutionary" foreign media. The detention comes only days after the arrest of another Iranian journalist, Yashar Soltani, who is in charge of Memari News, a website that focuses on urban news and architecture.

The two arrests appear to be related. Mohaghegh and Soltani had both recently published a set of declassified reports involving Iran’s General Inspection Office, an organization linked to the Judiciary. The reports focused on the transfer of property held by the Tehran Municipality to a number of cooperatives and select managers below market value.

Soltani’s lawyer announced on Saturday that the plaintiffs against Memari News, which broke the story of the property deals, are Tehran Mayor Mohammad Bagher Ghalibaf and Tehran City Council Chairman Mehdi Chamran. Soltani was reportedly imprisoned for not being able to provide a $57,000 bail.

According to his lawyer, Soltani faces judicial action over three complaints. The first complaint is related to the news of Ghalibaf’s daughter’s wedding, which took place in Lavizan Park. The second complaint is connected to the news published on the activities of Chamran’s son and his involvement with a renovation company, and the third and final complaint “is related to the published news of the mayor’s office and the release of the housing estate transfer list.”

The reports of corruption involving Ghalibaf’s office come at a time when the Rouhani administration is under heavy fire for complying with the guidelines of the Financial Action Task Force (FATF), the intergovernmental body established to promote effective implementation of legal, regulatory and operational measures for combating money laundering. Collaboration with FATF is a priority for the Rouhani administration, which is keen on normalizing banking relations with the world. In this vein, the refusal by two Iranian banks to provide services to a blacklisted Islamic Revolutionary Guard Corps-linked entity has sparked furor among conservatives, who charge that FATF is compelling the imposition of “internal sanctions.”

Sept. 20 was also marked by reports of the sentencing of Nizar Zakka, a Lebanese citizen and US permanent resident who was imprisoned last September. According to his US-based lawyer, Zakka has been sentenced to 10 years over spying allegations. The verdict was reportedly handed down by Tehran’s Revolutionary Court and notably coincides with Rouhani’s two-day visit to New York.

Zakka was arrested while on his way to the airport to leave the country after participating in the 2nd International Conference & Exhibition on Women in Sustainable Development, which he received an official invitation to attend. The Lebanese businessman is an advocate for internet freedom and heads a nonprofit group that has worked with the US government. The secrecy and lack of information surrounding Zakka’s arrest last year led to countless speculation in local media.

So far, the news of Zakka’s verdict has not made it into Iranian media — most likely because Sept. 20 is Eid al-Ghadir, a national holiday.

by Murielle KASPRZAK and Joseph SCHMID | AFP | May 26, 2022
END_OF_DOCUMENT_TOKEN_TO_BE_REPLACED