In Iran, leaks indicating massive corruption are surfacing one after another in an apparent factional fight ahead of the country’s May 2017 presidential election. 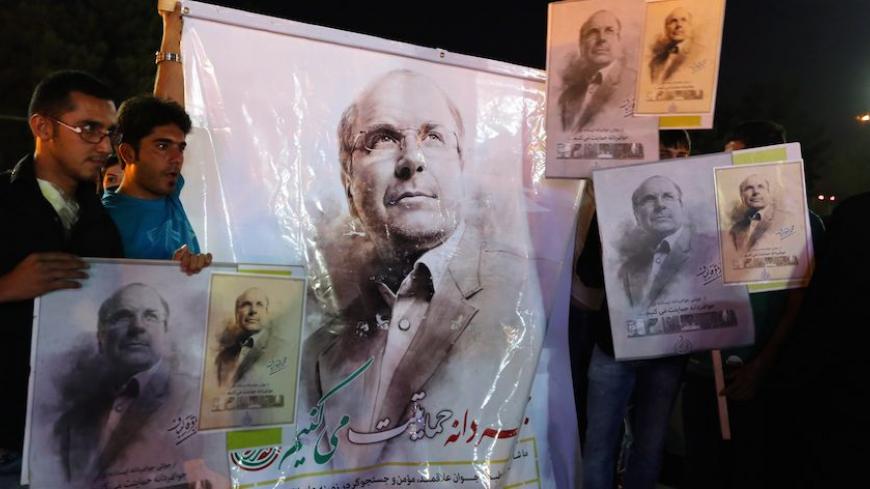 TEHRAN, Iran — A war is going on in the Islamic Republic. The war of whistle-blowing was launched by hard-liners who disclosed the pay slips of some managers appointed by the administration of moderate President Hassan Rouhani. These leaks, were used to damage Rouhani’s approval rating and instill the sense that Rouhani has reneged on his electoral promise of fighting corruption.

It seems that the hard-liners have a new weapon to use against Rouhani over the eight remaining months of his current term in office. It is clear that along with hard-line figures, Friday prayer leaders are frequently reminding people of the pay stub scandals to foment pessimism about the moderate president.

However, it appears that the hard-liners have received a response in kind, blunting their new weapon. The man at the center of it all is not a Reformist nor a moderate, but surprisingly one of the country’s most prominent conservative figures: Tehran Mayor Mohammad Bagher Ghalibaf.

Ghalibaf has surfaced as a key target for Reformists who have been scouring the field for wrongdoings in the conservative camp. Fresh leaks allege that the Tehran mayor’s office has been selling homes in affluent districts of the Iranian capital below market prices. In fact, lots of residential properties have apparently been sold at a 50% discount to the mayor’s deputies and conservative members of the Tehran City Council.

Ghalibaf, a former national police chief and two-time failed presidential candidate, is not a popular person among conservatives. However, when it comes to saving face, the entire conservative camp appears to be standing united in the face of the public backlash.

Conservatives have been giving speeches, denying any corruption in the Tehran mayor's office and attributed the leaks — described as “lies” — to three sources.

The first is the "seditionists." Conservative member of the Tehran City Council Parviz Sorouri has claimed that some of the “leaders of the sedition” are behind the “propaganda” against the Tehran municipality. In the view of conservatives, former Parliament Speaker Mehdi Karroubi, former Prime Minister Mir Hossein Mousavi and former President Mohammad Khatami are “sedition leaders” after their roles in the unrest following the 2009 presidential election.

The second group is the opponents of a conservative-dominated Tehran City Council. Hossein Ghorbanzadeh, the managing editor of the Hamshahri newspaper, which is owned by the Tehran municipality, has opined that the disclosures are all “lies” aimed at influencing the results of the election for the Tehran City Council board of directors. Ghorbanzadeh said, “The project was not effective, as all of the people on the board of directors and even the secretaries were re-elected.”

The last source is Rouhani’s cultural adviser Hesamoddin Ashena. The Shafaf news site, whose editors are said to be appointed by Ghalibaf, has claimed that the recent “attacks” against the Tehran mayor are coming from a “think thank” headed by “H.A.,” a not-so-veiled reference to Ashena.

Apart from these points, Ghalibaf and his supporters may worry most about the May 2017 presidential election. They believe that the real motive for the public disclosure of alleged corruption linked to the Tehran mayor is a Reformist strategy to burn Ghalibaf’s chances ahead of the vote.

Conservative Fars News reported, “The name of Mohammad Bagher Ghalibaf has always been mentioned on the list of possible candidates for the presidential election by Reformists. … The new key phrase of 'devolution of estates,' which has happened based on a legal process and under the monitoring of the inspection organization, has activated the government’s attack group against the mayor. In the future, such attacks will soar by using new subjects.”

Prominent conservative political analyst Amir Mohebbian has argued, “By [initiating] the issue of corruption in the municipality, the Reformists seek to get rid of one of their possible rivals.”

Hossein Qorbanzade, the secretary of Ghalibaf’s Progress and Justice Party, has stated, “The attacks will intensify as we approach the presidential and city council elections.” Farda News, a website with ties to Ghalibaf, has warned, “The moderate-Reformist current is in need of preparations for next year’s elections.”

These anxieties appear to indicate that Ghalibaf may be envisioning a third shot at the presidency. In fact, recent statements and analysis in the media signal that conservatives, and especially Ghalibaf’s supporters, are uneasy with people becoming pessimistic about them ahead of the presidential vote. In a letter to the prosecutor general, Ghalibaf expressed his concern over the image of the Tehran municipality being tarnished by the leaks, saying, “Public opinion has become pessimistic about urban management.”

When the hard-liners and the conservatives unleashed “payslipgate,” Rouhani and members of his administration did not deny it. At first, they asked for patience as they looked more closely into the matter. When the allegations were proven true, they came forward and apologized to the people and promised to eradicate corruption. Many of the implicated managers were removed and a circular was issued to prevent managers from receiving unconventional levels of compensation.

In contrast, Ghalibaf has not only refused to acknowledge the reported corruption linked to his office, but filed lawsuits against the whistle-blowers. An order was issued to block Memari News, which was the first media outlet that disclosed the alleged corruption. In his letter to the prosecutor general, Ghalibaf asked for the judiciary to launch legal action against those who have “targeted the reputation of people and prestige of the Tehran municipality.”

Ghalibaf and Rouhani’s reactions to the corruption scandals are being compared on social media, especially the popular smartphone messaging app Telegram. Reformists are saying that the differences in the responses between the two politicians is the difference between a "lawyer" and a "colonel": The lawyer apologized to the people, while the colonel silenced the whistle-blowers. The use of these terms orginated in the televised debates ahead of the 2013 presidential vote, in which Rouhani forcefully exhorted that he was a lawyer and not a colonel, in reference to Ghalibaf.

Whether Ghalibaf is really taking a third shot at the presidency or not, the latest corruption scandal has damaged both the “colonel’s” reputation and that of other conservatives ahead of the May 2017 vote. As such, they have a difficult path ahead if they decide to contest Rouhani’s bid for a second term. Indeed, they no longer claim that Reformists and moderates — who quickly confronted corruption within their camp — are corrupt, in consideration of the reportedly bigger and unprecedented corruption within the conservative camp.