How Sinai women are fueling Egypt's economy with homemade goods 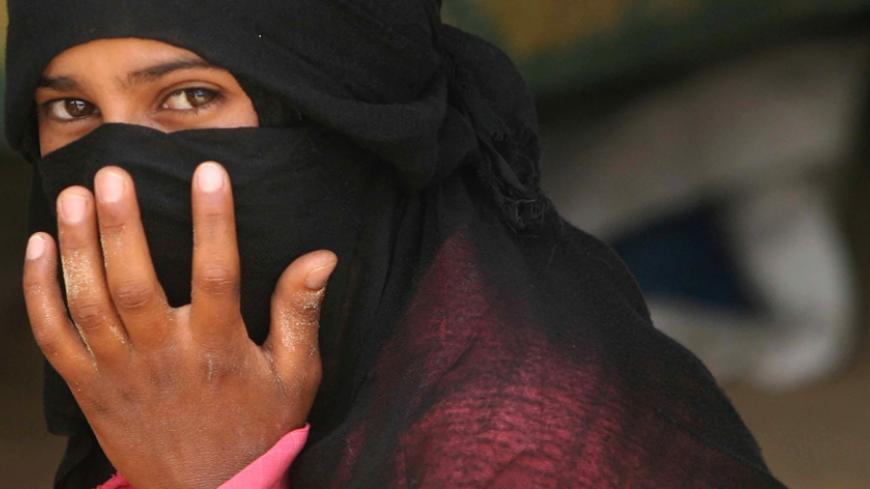 A Bedouin woman from al-Aweida tribe sits next to her tent in north Sinai, about 450 kilometers (280 miles) northwest of Cairo, April 12, 2008. - REUTERS/Amr Dalsh

Wearing her embroidered face veil and Bedouin-style gown, Salmiyya al-Gebaly stands in a corner, ready to welcome visitors from outside the Sinai Peninsula. With her eyes lined with kohl — a traditional form of eye liner — she offers the visitors handmade crafts that several local women have produced themselves.

Gebaly, a woman in her 40s, first began to work in embroidery when she was 15 years old and living in the mountains. She gradually started exporting her wares to foreign countries, mostly the United States and Germany.

Gebaly first began operating outside the Bedouin community in 1998; she left the mountains for the town that surrounded St. Catherine’s Monastery in the eastern Sinai, where she showed her wares to the local officials. She told Al-Monitor that she then began to take part in exhibitions through a European Union grant, which provided her with funding for two years.

Within the larger tourist destinations in Sinai, there is a thriving trade in the handicrafts by Bedouin women such as Gebaly, which have become very popular among tourists. These handmade items can be found in virtually every marketplace in the tourist-driven cities of Sinai; an intermediary who represents the Bedouin women brings the products to the owners of the tourist shops and commercial centers. However, the slump in tourism that followed the January 25 Revolution has had a negative impact, driving the women to approach the store owners on their own.

Handmade crafts from Sinai include beads, embroidery and weavings. They are used in the making and adornment of women’s gowns, face veils (burqas), handbags, earrings, pendants, necklaces made of colored beads and all those collectibles that bear the Bedouin stamp: characterized by ornate, bright colors, yet with a simplicity derived from the desert environment.

Gebaly said that her work reached greater exposure after the EU offered assistance in providing venues to showcase her products as well as those of her Bedouin friends. Bedouin custom normally prevents the women from going out and socializing with non-Bedouin strangers. This assistance enabled her to forge contacts with a number of foreigners, many of whom she continues to communicate with even after the expiration of the grant.

Gebaly was able to help Bedouin girls work in the trade, and she acted as an intermediary between them and the merchants who would showcase their crafts.

As soon as the EU grant expired she started liaising with merchants directly, aided by a few advisers who worked on a development projects in Sinai to market handicrafts. In the process, she confronted the traditions of Bedouin society, since she decided to complete her secondary education, which is normally off-limits to Bedouin women.

Gebaly said that she began working with five other women whom she trained. They offered training courses to other groups of Bedouin women, and eventually they numbered 430 women in the area of al-Wadiyan, which is inhabited by the al-Jabaliyya and Ulad Sa’id al-Muzayyina tribes.

She claimed that this project came about in an effort to promote the economic development of the Sinai tribes, after the recession that followed the decline in tourism. She opines that these small projects have aided in changing the culture of the Bedouin society.

According to Gebaly, the monthly income of the women participating in the Bedouin handicrafts trade has grown from about 150 to 1,300 Egyptian pounds ($17-$147), enabling these women to help their families. Gebaly has navigated the international market by supplying orders placed by her friends in the United States and Germany; she garners relatively high-priced sums on these orders, enabling her to earn a profit and to invest in merchandise for future projects.

“The entire world has become a small village, through electronic means of communication, but we are proud of our heritage, customs and traditions. We will develop and promote them across many countries,” she said. “The women of Sinai are now participants in the salvation of Sinai’s economy and promotion of its products on a global level.”

Yet she has grown weary of the governorate’s and governmental institutions’ neglect of her small projects. “The government and the governorate do not help us and have completely misunderstood how to develop Sinai,” she claimed, calling on them to take an interest in small projects that can achieve long-term sustainable development.

For a model of the tangible role that development associations play on the ground in Sinai, one need look no further than the Al-Jurah Association for Local Development. Established as a market for promoting handicrafts from Sinai produced by female heads of household from the al-Sawarikah tribe, it offers the women revenue and helps them to provide for their families’ needs, especially when the husband is either not present or is unemployed.

Fatimah told Al-Monitor that she applied to work with Al-Jurah Association and that because of her handicraft skills she is now able to provide for her family after her husband fell ill and can no longer work.

Salihah, a local woman who is the manager of the children’s project at Al-Jurah Association, told Al-Monitor that the number of girls who drop out of school is very high due to tribal customs and traditions. “There are only 14 girls [at the association] who have achieved higher than a middle school education. This is one of the reasons for their indifference toward seeing other societies. But this wall is slowly breaking down.”

According to Salihah, civil society has a large role to play in encouraging women to work and to increase women’s participation rates in public work as well.