Despite the worsening security situation, an Egyptian woman from the Sinai Peninsula launched a project to modernize traditional female attire and promote Sinai's rich Bedouin heritage for tourism. 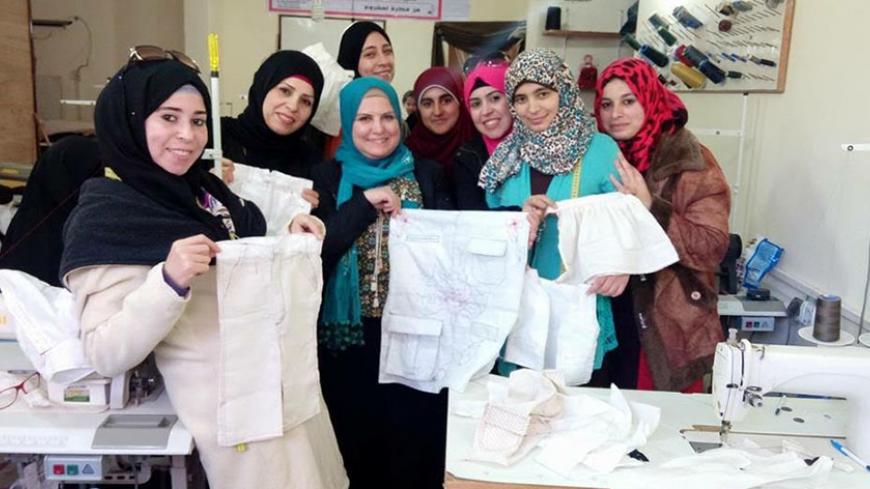 Women who are working with the Motiva project show off the patterns they use to make clothes in Sinai, Egypt. - Motiva Project

The Sinai Peninsula is not just a front of clashes between the Egyptian army and militant groups. Sinai is also a place with a rich culture and heritage that is reflected in the costumes of its people. The attire of Bedouin women in Sinai now provides a source of income for women, as the modern creations with traditional embroidery styles are popular with tourists.

Amani Ghareeb sensed the threat to the Bedouin culture and heritage when she inherited from her grandparents traditional Sinai attire. In 2010, she founded Fayrouz Association that assists in the establishment of small projects that help Bedouin women in Sinai make a living. Ghareeb launched the Motiva Sinawi project in order to preserve and develop Bedouin clothing.

Ghareeb told Al-Monitor, “The Motiva Sinawi project aims at developing the [traditional] attire of Sinai. A motiva is a [traditional] Sinai ornament. The idea is to embroider motivas on modern clothes, so that fashionable clothes get a traditional touch. We had to come up with different designs of the Sinai costumes as it should not be restricted to abayas, shawls or burqas.”

Ghareeb said that her project employs roughly 300 girls and women, and that it has become a source of income to the women in Sinai. “It is a source of income that does not require working in a workplace at set times. The women can work from home," she said.

According to Ghareeb, the project attracts women from all over Sinai. “This project suits them given the security situation in Sinai, especially for women in the towns of Rafah and Sheikh Zuweid that are witnessing a fierce war between the Egyptian army and militant groups,” she explained.

When asked about the challenges the project faces, she noted, “The security situation in Sinai does not affect the project as such, because the curfew starts at night. However, marketing and transporting the products to other governorates is a problem."

Ghareeb funded Motiva Sinawi, which is based in el-Arish, on her own, as she strongly believes in the importance of preserving Sinai heritage.

“The new designs of the Bedouin costumes produced by the project are popular with tourists. The clothes are sold in [the tourist town of] Sharm el-Sheikh, and this has encouraged us to launch a website to promote the products abroad,” she said.

Ghareeb would like to see the state provide financial support for Motiva Sinawi, as it is the only project that aims to preserve the identity and heritage of Sinai's costumes.

Eman Mohamed, a trainer with Motiva Sinawi, told Al-Monitor, “I am responsible for teaching embroidery to the women. A trainee does not have to be a skilled embroiderer as she is trained to use the new designs of the Sinai costumes.”

Mohamed said, “Older women contribute by training [younger] women who want to be part of the project, so they can get income through a job that suits their old age. There are women who excel at developing creative Bedouin costume designs.”

She said she would like to see the state hold exhibitions in other governorates to display the modern Bedouin costumes, especially in tourist areas. When a tourist buys a Bedouin piece of clothing and flies back home with it, the attire becomes an advertisement for tourism in Egypt, which encourages tourists to visit the country.

Mohamed added, “The project takes into consideration what the Bedouin attire represents. For instance, some clothes are worn by women during work in the daytime, such as the plain blue clothing with light embroidery. A bride in Sinai wears a special outfit on her wedding day, which is red mixed with other colors. On formal visits, women wear an attire in blue mixed with other colors. Developing Bedouin costumes without compromising heritage, traditions or conventions of Sinai society is a challenge for the project."

According to Mohamed, women in Sinai often help their husbands in providing for their families, to face the hardships of life in Sinai due to the war between the Egyptian army and jihadi groups. “The project helps women work, allowing them to innovate unique and modern embroidering designs,” she added.

“The women in Sinai are no longer staying at home unemployed as in the past. Women now play a vital role in society and work in all jobs. However, creating Sinai costumes is the profession the women are most competent in. The project has become a success, especially in changing the styles of design and in spreading the designs in Sinai and hopefully [in the future] outside Sinai and Egypt,” Mohamed said.

Motiva Sinawi is creating modern clothes by developing traditional costumes specific to Sinai and making them available outside the Peninsula. However, for the world to stop viewing Sinai as a warfront for the Egyptian army and militant groups, the Egyptian state needs to assist in promoting the culture and heritage of Sinai society that is reflected in the attire of its people.