As the war continues in Yemen, increasing power cuts have driven more and more citizens to install solar panels. 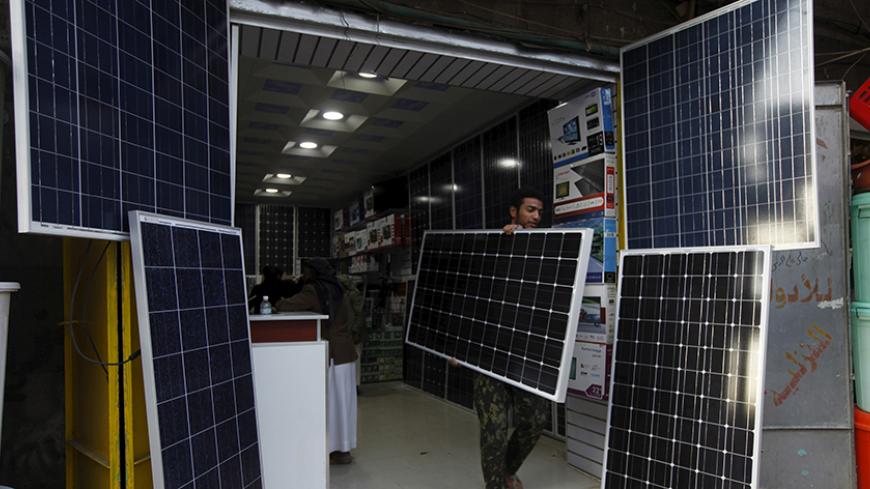 A man carries a solar panel amid a severe shortage of electric power in Yemen's capital, Sanaa, Nov. 28, 2015. - REUTERS/Mohamed al-Sayaghi

SANAA, Yemen — In the mid-1990s, satellite dishes on the roofs of Yemeni houses indicated that the owners were well-off and in possession of the latest TV technology. Two decades later, in 2015, solar panels started becoming part of the skylines of cities and villages. While satellite dishes were initially only visible in posh neighborhoods in big cities, solar panels appeared in record time in rural and urban areas, on the roofs of the rich and the poor.

With the start of the civil war, solar panels found their way into the country fast. On March 23, 2015, Sanaa experienced a major power outage. The Marib power plant, which supplies Yemeni cities with energy, went out of service. Consequently, the generator business flourished for a while. But in an unstable country like Yemen, one cannot guarantee that generators — which run on fuel — will remain functional at all times, especially with the increasing fuel prices and a lack of fuel every once in a while.

Yemenis were thus left with the option of solar energy, a power source not used before in the country.

In this regard, an official from the Yemeni customs authority in Sanaa told Al-Monitor on condition of anonymity, “In 2015, the importation of solar panels from India and China through the two outlets controlled by the Houthis — Sanaa airport and the port of Hodeidah — amounted to $40 million, while the cost of importing batteries and wires reached $90 million.”

It is noteworthy that no specific party is in charge of the importation of solar panels, and traders import the panels mostly from China.

When al-Qaeda took control of Mukalla in April 2015, the capital of Hadramawt province in southern Yemen, the extent to which solar panels were imported was not documented, but it was clear that the importation of panels was thriving since tax elimination encouraged traders. The equipment needed for the installation of solar panels — such as the panel, batteries and electric wires — flowed around the same time through the port of Aden and al-Tuwal port, which connects Yemen to Saudi Arabia. Both outlets are under the control of forces backing President Abed Rabbo Mansour Hadi.

Mustafa Nasr, the head of the Studies and Economic Media Center in Sanaa, told Al-Monitor, “I received information from an important trader in the country indicating that the value of the solar energy equipment that has entered Yemen since 2014 exceeds $2 billion.”

Jalal Mohammad, a manager with Tagadod Organization in Shu’ub, east of Sanaa, told Al-Monitor, “Energy is expensive in Yemen for people looking for an alternative source of power. The value of household installation reaches $5,000.”

But China, which is saturating the Yemeni market with most of its products, has found solutions even for the poor.

Mohammad said, “Two or three lamps lit by a small battery or a solar panel that is a bit bigger than a textbook are enough for some people. This costs $21, and for the poor it is a fair solution as opposed to candles.”

Mohammad al-Hatami, the owner of a small grocery store in Sanaa, told Al-Monitor, “I cannot afford to buy a solar energy installation that can operate three fridges in my shop. I gave up selling juice and cold water, and I am just lighting the place. There are five lamps with a power of 10 watts each that work from sunset to dawn.”

He added, “In the morning, I turn the panel that is 1 meter [roughly 3 feet] long and half a meter wide to face the sun. In the evening, the battery is recharged fully to light the store.”

Because solar energy panels have become popular, their sale is no longer restricted to traders and specialists. For instance, a pharmacist in Dar Salam, south of Sanaa, sells medicine and solar energy panels of different sizes. In Sanaa's Mogadishu Street, which is the largest market for laptop traders, solar energy panels appear next to laptops. It seems that these traders have found a substitute for their declining trade.

Zakarya al-Kamali, a journalist for Anadolu Agency and a solar energy user, told Al-Monitor, “Yemenis did not resort to solar energy sources in search of clean and alternative energy. It was rather out of necessity imposed by the war after more than a year of power blackouts.”

He added, “This alternative service succeeded in maintaining Yemenis’ contact with others and saving them from darkness. But it did not compensate for the state’s power current. Heavy-duty professions such as carpentry and the production of aluminum windows cannot operate on solar energy. Besides, houses that have the needed lighting during the evening hours cannot rely on solar panels to operate the water heater in cold provinces or air conditioners in coastal areas.”

While solar energy offers a partial substitute for state power for citizens, hospitals and factories are suffering amid the power cuts.

Sanaa resident Mohammad Amer told Al-Monitor, “A doctor at al-Thawra hospital in Sanaa — which is the biggest state hospital in Yemen — asked me for 20 liters [5 gallons] of water to wash and sterilize surgery equipment that she was to use to operate on my wife who was about to give birth to our first child.”

He added, “At the beginning of May, she [the doctor] told me that there was no water at the hospital due to power cuts.”

It is noteworthy that supplying water to the hospital requires power to operate a dynamo, which drains water from the hospital’s well to big containers on the roof of the building.

This power service is among the few services that the internationally recognized Yemeni government offers its citizens; without it, nothing is stopping the citizens from rebelling against the decisions of the government in the future.

Mokhtar al-Rahbi, the former press secretary to Yemen's president, told Al-Monitor, “The Houthis who took control of Sanaa on Sept. 21, 2014, are to blame for the current situation in Yemen.”

He said, “It is only normal to discuss the rebellion of the people against their government due to a lack of services. But if the government provides services, there will be no problem. The citizens are thirsty for a state after the bitter Houthi experience.”

Before the outbreak of the civil war in September 2014, Sanaa received around 18 hours of power daily. In early July 2016, transformer stations in Sanaa supplied several neighborhoods in the capital with around four hours of power every five days.

Electricity is crucial for Yemenis, especially in coastal regions that rely on air conditioners with temperatures that can reach as high as 40 degrees Celsius. Power is also required in hospitals, universities and other organizations.

Until the government regains control of the Yemeni territories, the users of alternative energy in Yemen will keep hoping that the sun shines on so that they can charge their batteries.