With Lebanon’s deepening electricity crisis and fuel shortage, many homes and businesses have switched to solar panels to generate electricity due to widespread power cuts from the country’s unpredictable energy sector. 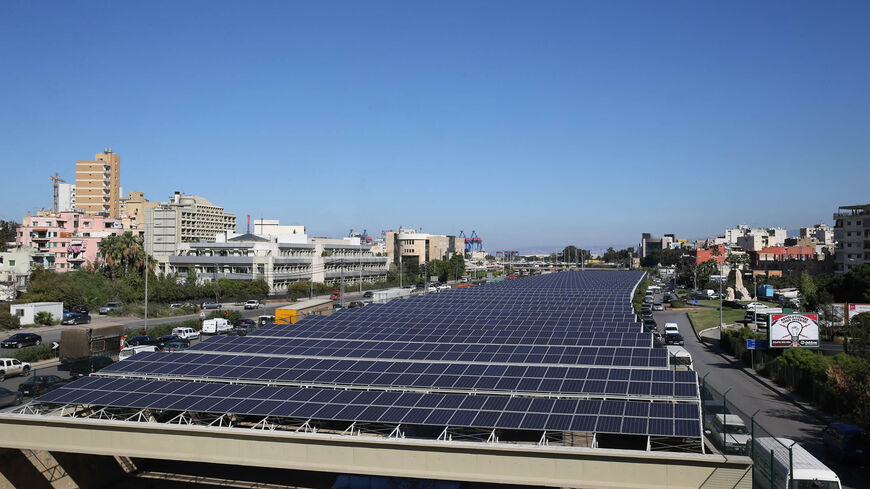 In the face of the worsening energy crisis and the inability to find solutions to secure electric power, many Lebanese have taken the initiative to rely on solar electricity as subscriptions from private generators are expensive and state-run electricity is insufficient.

Demand for solar energy to generate electricity has spiked significantly and according to experts, if the situation continues like this many households are willing to invest in solar panels.

The price of each kilowatt has increased drastically, adding another burden to citizens who already have very little income with the fluctuating rate of the Lebanese pound.

Engineer Youssef Ghantous, board member of the Lebanese Solar Energy Society, told Al-Monitor, “The economic situation has made solar energy a much-needed commodity to feed this 'energy starvation' caused by the absence of normal utility supply.”

“Necessity is the mother of inventions,” he added.

Whilst in several countries power technology such as solar panels have been promoted for their sustainability and environmentally friendly outcome, in Lebanon their popularity emerged as the electricity crisis left much of the population grappling with life without power.

Kerosene oil lanterns and candles became very common in many houses, bringing people back to traditional methods of lighting.

Many Lebanese who work online were forced to move to neighboring countries like Greece, Cyprus and Turkey to have access to all-day electricity and Wi-Fi.

Rasha Kassab, a young Lebanese entrepreneur who works at home for projects across the globe, was keen to remain in Lebanon. “I installed over 3 Wi-Fi services and added a UPS battery to charge power, but it was not enough to have 24-hour electricity. So investing in solar panels was the most desirable solution to keep my work running smoothly without having to move to another country,” she told Al-Monitor.

Demand has increased as people are witnessing success rates of solar panel installations, in both the city and villages.

Solar panel suppliers and installers are overwhelmed with requests for installations and the import of solar panel systems has become one of the most popular commodities, with some grocery shops selling panels due to the high demand.

Chihab Merhi, a mechanical engineer specializing in sustainable energy, told Al-Monitor, “Demand for solar energy has reached a level that I have never witnessed in all my working years in Lebanon, especially in the residential sector.”

Merhi added, “The reason is simple: a desperate search for a long-term fuel-free sustainable energy source.”

Lebanon geographically is among the top 30 countries with the highest average solar energy potential, as it is a Mediterranean country and has over 300 sunny days per year.

These sunny days have different intensity and duration from season to season and from day to day, but to have a figure in mind, Ghantous told Al-Monitor, “A PV solar panel of 500 watt peak capacity — a common size panel these days — has the potential to produce 850 kWh electricity per year in Lebanon, which is enough energy to power 100 watts lighting capacity for one entire year.”

Whilst many promises have been unaccomplished in the energy sector to find a maintainable solution that secures 24-hour electricity, tens of millions of dollars have been wasted with no strategic plan in place.

Lebanese Minister of Environment Nasser Yassin noted that action on climate change must be at the heart of Lebanon’s recovery from the financial crisis.

At a conference where Al-Monitor was present, Yassin said, “Thinking sustainably is crucial. For example, we can’t keep using fuel for generators, we need to use other options such as solar panels.”

With increasing demand and suppliers for solar panels around different regions in Lebanon, the interior minister announced that applications to set up rooftop solar installations should be submitted to the Energy Ministry for approval.

Despite this decision from the ministry, many citizens do not abide by the rules of having to obtain a license before installation, as they believe the government has put such a decision in place for commercial needs and not for the safety of citizens.

“The absence of the authorities’ supervision puts a big responsibility and self-check on the contractors and the engineers to respect safety measures in terms of the support of the system against wind and weather conditions, as well as installing a proper circuit and fuses system to prevent any electrical hazards or fires,” Ghantous told Al-Monitor.

While the electricity crisis hit everyone in Lebanon, including hospitals, some have not hesitated to install solar panels that would generate electricity to keep their doors open. Al-Koura Hospital in northern Lebanon was one of them.

Merhi said, “We worked on a 200 watt peak project back in 2018, as the main goal was to help the hospital go green and save a huge amount of diesel money.”

He added, “In all the fuel crises that hit Lebanon with the shortage of electricity power, Al-Koura Hospital was sustained and not desperate for diesel nor suffering from a blackout scare, and it has set an example to other hospitals in Lebanon that investing in solar energy is the way to go."

Similarly, another organization in Mount Lebanon — Shouf Biosphere Reserve — could no longer tolerate depending on the mercy of the private electricity generator in the area, so installing solar panels was one of the few and best options they were left with.

Jihan Seif, human resources manager at the organization, told Al-Monitor, “Although the total cost exceeded $5,000, it is an investment worth the money as it provides a long-term sustainable and practical solution with Lebanon’s unreliable electricity supply.”

Solar panels undoubtedly are highly valued for their outcome on the environment through producing clean energy, contributing to the reduction of carbon emissions and global warming, but most importantly in a country that lacks job opportunities like Lebanon, they can generate hundreds of jobs.

A study by the United Nations Development Programme and the Lebanese Ministry of Energy and Water found that there is an employment potential of 18,849 people in the solar energy sector. In one of their studied scenarios jobs were created in design, planning, installation, transportation, logistics, operation and maintenance services.

The electricity crisis has underlying problems such as corruption and lack of money management, and has worsened with the financial crisis.

Fadi Abou Shakra, representative of fuel distributors in Lebanon, told Al-Monitor, “As long as there is a fuel crisis caused by the fluctuating exchange rate of the dollar, there will always be an electricity crisis or rise in prices from private generators that purchase their fuel in dollars.”

Solar panel options begin with two panels and an inverter along with a battery at a price of $800-$1,000. The price increases depending on the expansion options to provide a higher capacity that generates more electricity.

Although many households have already installed or are looking to install solar panels, the price remains an issue for many due to the shortage of dollars in the market.