The National Economy Ministry in Gaza has lifted taxes and fees on alternative energy equipment to encourage residents to buy it to get through the ongoing electricity crisis. 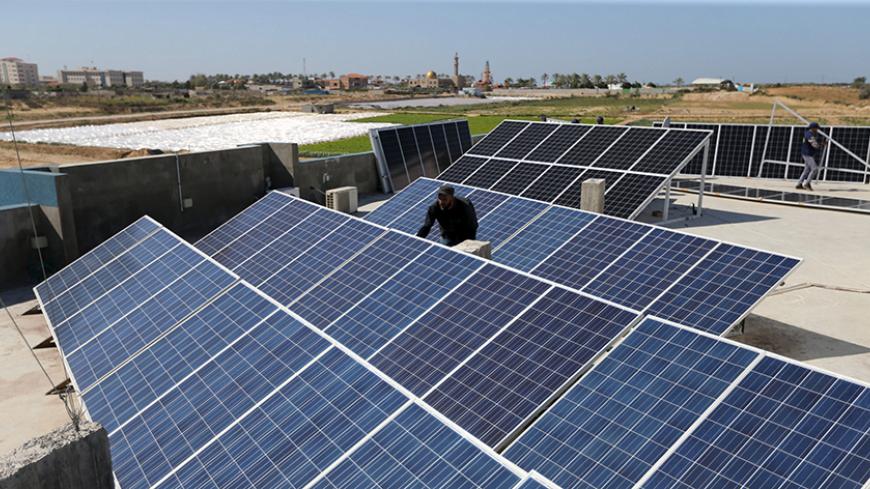 A Palestinian worker installs solar panels atop the roof of a medical center in Gaza City, March 1, 2016. - REUTERS/Ibraheem Abu Mustafa

GAZA CITY, Gaza Strip — The National Economy Ministry in Gaza announced on May 27 that it was lifting all fees, import taxes and customs duties on equipment for generating electricity, including solar power systems. This decision comes as the electricity crisis in the enclave reaches a new plateau, with Gaza’s only power station unable to operate at full capacity amid the political dispute between the Palestinian Authority (PA) in Ramallah and Hamas in Gaza.

The situation has recently worsened, with Israel agreeing on June 12 to a PA request to scale back its power supply to Gaza, reducing the average of four hours of electricity a day by 45 minutes. Some private companies have begun turning to solar energy systems, but few residents are able to use them in their homes because of the high cost of installation, which starts at around $1,500 for a 0.5 kilowatt solar system.

Tarek Labad, a spokesman for the National Economy Ministry in Gaza, told Al-Monitor that it had become necessary to lift the equipment fees to help empower residents to install equipment for solar power systems at prices in line with their financial abilities given Gaza's long-running economic crises in addition to the electricity crisis.

“Lifting import taxes on any product has a positive impact on the market,” said Labad. “This measure can increase demand by consumers for the product, revive the market and improve the economic and commercial situation.” Labad also said that his ministry has called on Palestinian banks, within the scope of their social corporate responsibility, to establish a fund for issuing loans to buy solar power equipment.

“These measures will be economically beneficial to merchants and citizens alike,” he said. “The ministry controls the prices of goods, such as solar power system installation, parts and equipment, … through its Consumer Protection Department.”

Iyad al-Hazki, the director of renewable energy at the Gaza Electricity Distribution Corporation (GEDCO), told Al-Monitor, “GEDCO is launching campaigns and projects to encourage citizens to use solar energy as the safest alternative in light of the electricity crisis.”

He pointed out that on March 18, GEDCO launched the first phase of a solar power project that aims to raise awareness of alternative sources of energy and promote their use. “The project offered to supply electricity to houses by installing 500 solar power systems under a pay-as-you-go financing scheme,” said Hazki. He further explained that GEDCO is not trying to reap profits from the project, but to ease the suffering of Gazans by cooperating with solar power companies, urging them to sell equipment at reduced prices in Gaza.

Despite the high cost of installation, said Hazki, the systems are economically feasible, as Gaza has sunny weather most of the year. He noted that the cost of such systems is high around the world, not just in Gaza. He also noted that solar power systems may not fully replace the need for plant-generated electricity, especially in light of economic conditions in the Gaza Strip, where citizens can only buy 1 or 0.5 kilowatt systems, which are barely sufficient for lighting needs.

Hazki claimed that the measures taken by the National Economy Ministry will contribute to reducing the cost of the systems by about 20% and thus encourage more citizens to buy them.

Nabil Maarouf, the director of the Renewable Power Engineering and Contracting Co., told Al-Monitor that his company is one of 40 in Gaza that sells and installs solar systems. He said there are two types: “The first system is more economically feasible in the long run, but is not imported by my company since its price is way above citizens’ purchasing power, while the second system is as efficient and equipped with safety and protection devices to prevent an electrical accident, but the buyer is required to replace the battery every year, and prices range between $400 and $600.”

Maarouf clarified that Gaza residents will only notice a price reduction for equipment after the equipment that was imported before the decision to lift the fees has been purchased. The equipment will continue to sell at the regular price to cover taxes, fees and profit margins. Eventually, however, Maarouf expects the price reduction will encourage more people to start using solar energy.

Economic analyst Amin Abu Eisha is not enthusiastic about the ministry pushing solar energy. “The decision is not applicable and is unrealistic,” Abu Eisha told Al-Monitor. “The price of solar energy systems, even if the fees are lifted, will remain beyond the reach of the average Gazan, especially in light of the pay cut crises of PA employees in Gaza, some 42,000 workers.”

He also pointed out that although solar power systems are the safest solution, they require costly periodic maintenance. He explained that the use of small generators, an option some Gazans are pursuing, is not particularly safe, because the generators are not usually equipped with protection and safety features. Of note, their conductive parts are often exposed and may lead to electrical accidents resulting in burns or fire.

Abu Eisha stressed that solar power is only a partial solution to the electricity crisis and called for a radical solution instead of encouraging people to waste money on something that is not beneficial in the long term.

According to Abu Eisha, what Gaza needs is a hydroelectric power plant that meets the needs of the entire population. He estimates that it would cost no more than $500 million. Meanwhile, he said, “The Gaza Strip has spent billions of dollars on temporary inefficient solutions.”