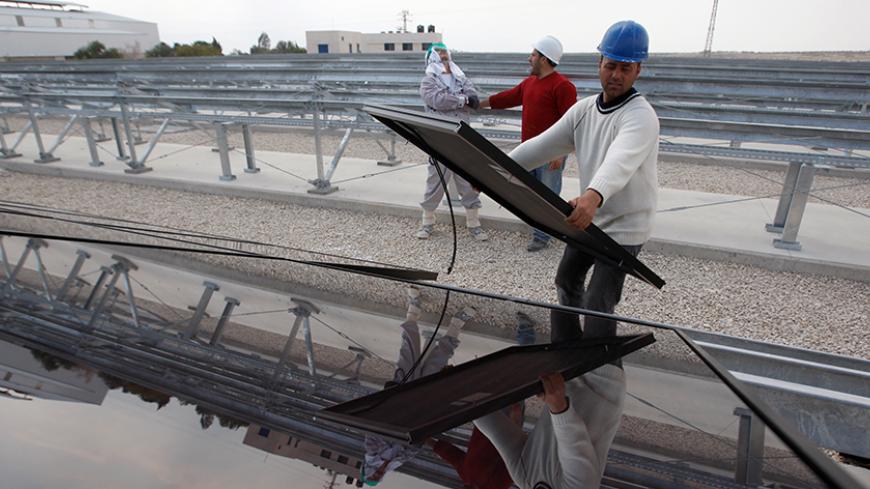 A Palestinian laborer installs solar panels at a photovoltaic plant in the West Bank city of Jericho, March 27, 2012. - REUTERS/Mohamad Torokman

The Palestinian woman actually started selling electricity to the very same company for 800 shekels (about $200) per month after she started a renewable energy generation project at her home.

Rabi had carefully studied the economic feasibility of the project. Despite the high cost of installing the solar cells, she decided to run the risk and make her house one of the first in Ramallah to generate electricity from solar energy.

Solar cells are installed on rooftops, where the sun’s rays are picked up and converted into electricity. An electric reflector is used to convert solar energy into electricity ready to be used at home.

As planned, she managed in three years to generate electricity and sell the surplus to the company.

“I carried out a simple study on the cost price compared to the price of production, and I found it a profitable project, and that in the span of only three years, I would be able to achieve cost recovery and have an open source of electricity for the house for free,” Rabi told Al-Monitor. “The electricity tariff rates are really high in the West Bank, so this project is really cost-effective — not to mention that I sell the surplus of electricity to the electric company, which is an additional source of income for the family.”

The cost of installation is high, about 38,000 shekels ($9,700), she said. "However, in the long run, this cost is not comparable to the return, especially since the station started producing electricity only one month after installation,” Rabi said.

Rabi runs a beauty center in the center of Ramallah, which costs her about 400-500 shekels ($102-$128) in electricity per month. The station at her home produces enough electricity to cover the needs of her house and salon, with a remaining surplus.

She learned about the project from local newspaper and television advertisements. Once she officially announced her project, the idea spread in Ramallah. A few houses in the northern West Bank area, in Tubas in particular, have already started using solar energy to produce electricity.

Jad Hussein, an engineer specializing in solar cell installation, supervised some of the first residential projects while he was still a student at Birzeit University in 2007. Back then, the projects were not possible without substantial support from the government. But ever since then, Hussein has sought to develop solar power into a profitable economic project for citizens. Indeed, he decided to pursue his postgraduate studies in this field in Spain.

“In Spain, I used to work and study at the same time. When I returned to the West Bank and started my own project in installing home solar cells, Mrs. Rabi was my first customer,” he told Al-Monitor.

Since installing his first solar cell, Hussein has put 114 stations in place — mostly in residences, where the Energy Authority allows only 5-kilowatt stations. However, the business is expanding to include the industrial and commercial sectors.

“Currently, the business has expanded in Bethlehem, Ramallah and Jericho, and it is no longer limited to households only, but serves major institutions, some churches, mosques and schools as well,” he said.

The Energy Authority encourages these projects, as they help lower the high prices of electricity and reduce the need to buy from the Israeli side.

Falah al-Damiri, from the Palestinian Energy Authority-affiliated Energy Research Center, said these projects started as mere initiatives but evolved into strategies put forth by the Energy Authority and resulted in a law that was approved Aug. 30 by the Palestinian government. The renewable energy law provides for the right of everyone with electricity accounts to install solar cells at their homes or workplaces to generate power that lowers their electricity bills.

“In the past, people would have to bear all costs, and having solar cells at homes was subject to the approval of the electricity company. However, with the approval of this law, people have the right to install them based on clear parameters,” Damiri told Al-Monitor.

So far there are 400 houses in the West Bank using 5-kilowatt stations, mostly in the province of Tubas, as the electricity company there has been encouraging citizens to do so, according to Damiri.

In addition, the Energy Authority provides loans to encourage solar cell use, which has led to pioneering projects, according to Damiri. He noted, however, that the high cost of installation has hindered its growth, given the Palestinian people’s standard of living.

The Energy Authority is seeking to draw 10% of locally generated power from renewable energy by 2020. “Had it not been for the financial obstacles, we would have upped our expectations for greater rates,” Damiri said.