The share of renewables in Gulf states’ electricity generation is marginal, and the region still utilizes fossil-fuel driven power grids, but the potential for clean energy is substantial. 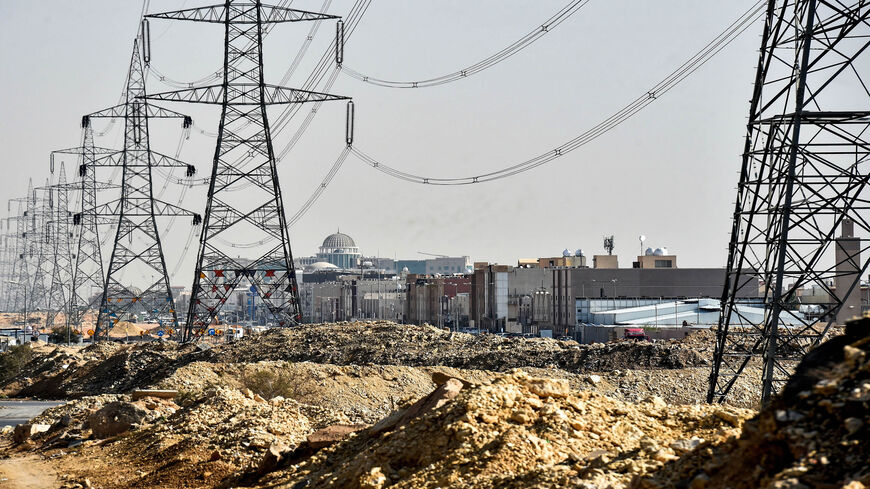 Electricity consumption in the Gulf region is reaching its annual peak as armies of energy-intensive air conditioners work at full throttle to insulate populations from extreme summer temperatures endemic to the vast stretches of the Arabian Desert. In June, the Kuwaiti city of Nuwaiseeb recorded the hottest temperature on earth for 2021, 53.2 degrees Celcius.

In the background of the pleasant breeze that cools down houses and offices lies polluting power plants fueled by natural gas and oil; despite the Gulf region having the world's lowest solar tariffs and the International Energy Agency (IEA) noting that solar projects now offer the lowest cost electricity ever seen. In 2018, plants that burn oil to produce electricity generated over 40% of Kuwait's and Saudi Arabia’s power, about 14 times the world’s average.

But a recent push to decarbonize the global economy, and in particular the transportation and power generation sectors, is enticing oil-rich Gulf states to pledge to clean their power grids. Saudi Arabia de facto ruler, Mohammed bin Salman, said the kingdom will generate 50% of its electricity from renewables by 2030, from just 0.02% in 2019.

“Maybe they will not hit all targets, but seeing the share of renewables in power generation jumping to 10%-20% within the next five to seven years is realistic,” a source in the Saudi energy sector told Al-Monitor on condition of anonymity. The Saudi Electricity Company did not respond to a request for comment about the timeline for retiring oil-fired power plants.

Critics argue Gulf states increasing the share of renewables in electricity generation primarily aims at freeing up fossil fuels for export to monetize large oil and gas resources as quickly as possible ahead of a global shift toward low carbon energy systems. In July 2018, Saudi Arabia burnt 580,000 barrels of oil per day to cope with peak summer electricity demand.

The energy source said, “Renewables is first and foremost a kind of a prestige, technology and business opportunity for Saudi Arabia, rather than one strictly about the environment.”

For the business community, interest for solar photovoltaic installations is primarily driven by a strategic calculation aimed at “protecting” the economic activity against future hikes in power prices, said Faris al-Sulayman, co-founder of the Saudi solar developer Haala Energy.

Energy prices for households and local businesses in the Gulf region have long been heavily subsidized as part of a broad redistribution of the oil rent to citizens in exchange for political loyalty to the ruling elite. But the urgency to rationalize government spendings to address the risk of lower oil revenues in the coming decades coupled with population increase is taking a toll on the social contract. Base electricity tariff for commercial clients in Saudi Arabia quadrupled between 2008 and January 2018, at a much faster pace than inflation.

“I would say our clients’ main driver is economical, the second one is marketing, to enhance their corporate image. The last motive is environmental,” Sulayman said. The entrepreneur told Al-Monitor the difference between the levelized cost of solar energy and the tariff of the national grid for Saudi commercial clients is now “more than 60% or 70%.”

“As more and more solar projects get built, people start to have greater confidence in the technology and conviction that solar is a good choice for them. There is a snowballing effect,” he added. But despite enthusiasm for clean energy, the sector is yet to tackle the intermittent nature of renewables by building up large-scale battery-based storage capacities to release during evening peak demand the wind and solar energy harvested during the day.

In the case of the United Arab Emirates (UAE), an energy mix entirely made up of renewable power might not be realistic; however, even with cost-effective grid-scale battery storage on the horizon, said Li-Chen Sim, assistant professor at Khalifa University in the UAE capital Abu Dhabi. She is also a specialist in the political economy of energy in Russia and the Gulf.

The UAE economic diversification involves the growth of non-oil sectors where the country enjoys a competitive advantage: petrochemicals, aluminium, steel, cement, fertilizers. “These are exactly the kinds of hard-to-electrify and hard-to-decarbonize sectors with high heat requirements that solar is at the moment unable to supply at cost-effective prices,” Sim told Al-Monitor, noting gas and "clean" coal could “facilitate” these sectors’ energy requirements.

By 2050, the UAE’s energy mix is expected to comprise 44% of clean energy, 50% of gas and "clean coal," as well as 6% nuclear energy — the federation of seven sheikhdoms became the first Arab country to launch a nuclear power plant in 2020. Saudi Arabia also wants to acquire nuclear plants and has contracted with Chinese entities on uranium exploration in a sparsely populated area in the kingdom’s northwest region.

The decision by the UAE to add a power plant fired by coal to its energy mix — the world’s most polluting fossil fuel — has been widely criticized by environmentalists. A similar plan in neighboring Oman provoked a backlash on Twitter, and the project was eventually shelved.

Interlinked grid in a sovereignty-sensitive region

To meet their substantial electricity needs, which recorded the world’s fastest growth between 2003 and 2013 at 6% to 7% per annum, and a heavy reliance on energy-intensive desalination plants to convert seawater to drinking water, Gulf states decided to join forces.

In 2009, the Gulf Cooperation Council (GCC) member states began interlinking their national power grids — an idea initiated in the early 1980 — to avoid power outages by ensuring a constant power supply throughout the region. This was “quite an interesting concept,” said Grzegorz Onichimowski, a former head of market operations at the GCC Interconnection Authority (GCCIA), the authority in charge of the regional grid.

In the renewables era, the regional grid could also facilitate the export of electricity. For example, abundant solar resources could turn the Gulf into a solar hub to supply a global network of high-voltage highways and supergrids promoted by Chinese President Xi Jinping.

According to Carbon Tracker, an environmental think tank, Oman and Saudi Arabia need to allocate just 1% of their land to solar panels to generate all their energy from solar.

“There is no doubt that we have great ambition for the Gulf to be an important link in the global electricity exchange network in the future, given its excellent east-west location,” said Nayef al-Abadi, chairman of the GCCIA.

Sim is skeptical, though. She noted, “China’s proposal is a great idea in theory, but will not pan out in reality because of technical and — perhaps more importantly — political challenges.” She said challenges of cross-border electricity trade involves standardizing power transmission lines, preventing cyberintrusions, addressing implications on sovereignty and energy security. The limited success of regional grids “speaks volumes about political obstacles,” she said, adding that the GCC interconnector “functions at 5% to 6% capacity.”

The volume of cross-border electricity trade in the Gulf “remains low” as the concept of regional markets “has gained little traction,” reads a 2020 study by the Saudi-based King Abdullah Petroleum Studies and Research Center. A source at the GCCIA, who is not authorized to comment publicly, told Al-Monitor that the GCC interconnector is currently utilized at 10% of its capacity, but should be used at a “much higher level.” At present, Gulf states keep “injecting power into the GCC grid so that it remains active,” the source said.

“The capacity of this grid was quite substantial, and this is why everybody expected it to be used for more than just emergency purposes [to avoid power outages],” Onichimowski said. The former GCCIA official foresees the intermittency of renewables as an opportunity to foster regional integration and greater utilization of the grid.

“With renewables coming to the region, they have to rethink the whole concept,” Onichimowski suggested, in reference to subsidies at the national level that discourage a Gulf-wide spot electricity market. “No one wants to subsidize the neighbor,” he added.

And notwithstanding the precariousness of regional cooperation that recurring political tensions have weakened, the opportunity of pooling capital spendings to build up regional renewables capacities that can cater to the needs of several countries could gain momentum.

Indeed, Gulf states now look to streamline capital expenditures and annual budgets. Previously, there was “no concept of optimal utilization of resources,” the GCCIA source said, as they piled up public debt at a record pace since the 2014-16 collapse in oil prices.

Yet opportunities for greater integration of the region’s power grid and cost-sharing could bear the brunt of an increasing Saudi Arabia-UAE rivalry for the Gulf economic leadership. Opportunities to cash in on exporting electricity produced locally, via high-voltage cables or by converting it into green hydrogen, is likely to reignite an intra-Gulf economic competition.

Pledges by the Gulf state to reform their respective power grid is not accompanied by a major paradigm shift as top-down approaches driven by state-led megaprojects still prevail.

Traditionally, electricity produced outside of urban centers by power plants has flowed to customers in cities via transmission lines; but the rise of solar rooftops plus battery storages could turn homeowners and businesses into small-scale producers of decentralized energy.

Gulf electricity utilities, which enjoy monopolies on power distribution, think otherwise. Those public companies maintain the status quo by providing little to no incentive for citizens willing to sell electricity back to the grid. Analysts said Gulf states are “very unlikely” to encourage the emergence of decentralized microgrids operated at the community level, which could be interpreted as a go-ahead to a more bottom-up approach while the region continues to suppress the right to freedom of association and assembly strictly.

For example, in Qatar, where the share of renewables in electricity generation is currently null, a first solar plant is expected to go into operation ahead of the 2022 FIFA World Cup. The Al Kharsaah Solar Power Plant will supply state-owned monopoly utility firm Qatar General Electricity & Water Co (Kahramaa) with nearly 10% of Qatar’s power demand; yet, regulations do not allow citizens to sell electricity produced by solar rooftops.

The Qatar government communication’s office did not respond to requests for comments.

But imposing a regulatory burden might be a short-sighted attempt to contain a surge in interest for solar energy and a community-oriented approach toward power generation. According to a 2019 study by Saudi Arabia’s General Authority for Statistics, between 23% and 64% of households in the kingdom are willing to generate solar power in their homes.