Unrivaled expertise in the energy industry and a growing global market for hydrogen is pushing Gulf oil exporters to invest in the global realignment toward cleaner energies. 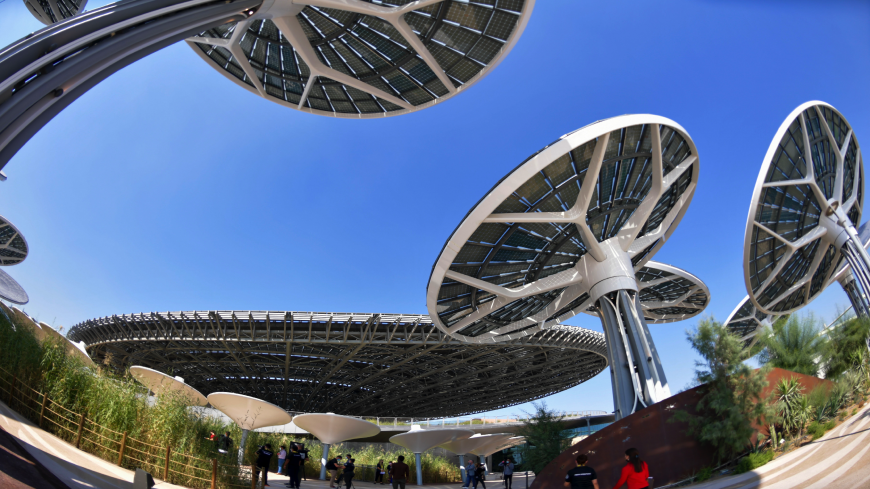 A picture taken on Jan. 16, 2021, shows solar panels used to generate renewable energy at the Sustainability Pavilion during a media tour at the Dubai Expo 2020, a week ahead of its public opening, in the United Arab Emirates. The six-month world fair, a milestone for the emirate, which has splashed out $8.2 billion on the eye-popping venue in the hope of boosting its soft power and resetting the economy, will now open its doors in October 2021. - KARIM SAHIB/AFP via Getty Images

Electricity is poised to become the lifeblood of the global economy in the energy transition era, underlining the crucial importance of electricity storage. “Electricity could not be transported over long distances, whereas now, and this is a completely new point, hydrogen, produced from electricity, can be stored and exported,” said Gerard Mestrallet, honorary chairman of French energy group ENGIE and waste and water management firm SUEZ.

Green hydrogen, a climate-friendly energy carrier obtained by splitting water molecules using electrolysis powered by renewables, is emerging as a clean fuel of the future to power transportation and energy-intensive industries such as steel manufacturing.

For the Arab Gulf states, which have some of the highest solar exposures in the world, the prospect of exporting large volumes of renewable electricity in the form of hydrogen is a timely opportunity as they attempt to diversify away from oil and gas revenues. In the United Arab Emirates (UAE), three state-run entities formed the Abu Dhabi Hydrogen Alliance to position the fossil fuel-rich emirate as a major exporter of blue and green hydrogen.

Yet green hydrogen remains a lot more expensive than other fuels, and S&P Global Ratings estimated that the climate-friendly energy carrier’s production costs would need to “fall by over 50% to $2.0-$2.5/kg” to become a “viable alternative to conventional fuels.”

Identifying alternative fuels is of the utmost importance for Gulf oil exporters who plan to capitalize on existing billion-dollar infrastructures and substantial expertise in the energy industry to retain their position as global energy suppliers. Mestrallet said the development of hydrogen is “an essential part of the transformation of their energy industry.”

Yet not all hydrogens are environmentally friendly, and 98% of pure hydrogen production involves carbon-intensive methods using natural gas or coal, HSBC reported. Indeed, grey, brown and black hydrogen production requires fossil fuels, while blue hydrogen is a lesser evil as greenhouse gases emitted during the production are captured and stored.

The Emirati tripartite alliance will be a vehicle for the Abu Dhabi National Oil Company (ADNOC) to explore green hydrogen opportunities. But the company’s chief executive, Sultan Ahmed Al Jaber, also acknowledged that a “special emphasis” will be placed on increasing existing blue hydrogen production capacities to leverage the emirate’s “significant gas reserves.” The federation of seven emirates is well-positioned to become “one of the lowest-cost and largest producers of blue hydrogen in the world,” Jaber said.

The world's biggest exporter of hydrogen

Such economic opportunities also whet the appetite of Saudi Arabia.

The kingdom plans to build the world’s largest green hydrogen plant powered by solar and wind energy in its futuristic megacity NEOM, as part of a broader ambition to become the world's biggest exporter of hydrogen. The project is “pivotal” to establish the city as “a global leader” in green hydrogen production, its chief executive officer said.

But despite market opportunities, transporting hydrogen still presents unique and costly challenges, particularly the need for extremely low temperatures. The world’s first-ever liquid hydrogen tanker, the Suiso Frontier, cooled to -253°C, was launched in 2019 in Japan.

The plant in NEOM is scheduled to be onstream in 2025 to produce annually about 240,000 tons of green hydrogen and 1.2 million tons of green hydrogen-based ammonia, an energy carrier easier to transport than gaseous hydrogen. Saudi power plant developer and operator ACWA Power, which is part of the $5 billion project, declined to comment.

Oil giant Saudi Aramco exported the world’s first shipment of blue ammonia in September 2020 to Japan. The island country plans to slash its dependence on oil, gas and coal imports to become a hydrogen-based society and be carbon neutral by 2050.

Gulf states face steep competition in the race for global hydrogen leadership. Australia’s Minister for Energy said the country has a “natural competitive advantage” to be “a world leader” in exporting hydrogen. Globally, more than $150 billion worth of green hydrogen projects have been announced in the nine months preceding December 2020.

Mestrallet noted the competitiveness of Gulf countries' green hydrogen productions might also be “penalized by the absence of freshwater resources in large quantities.” Indeed, the six Gulf Cooperation Council member states are ranked among the world's 10 most water-stressed countries in 2040, and the fresh water needed to produce green hydrogen has to be supplied by energy-intensive desalination plants powered by fossil fuel.

However, this may change as NEOM announced in January 2020 a deal to build the first "solar dome" desalination plant to rely on solar energy to produce fresh water.

Despite costs associated with seawater desalination, access to very low-cost electricity is the decisive element in hydrogen production, and Gulf states are well-positioned. Abu Dhabi secured in 2020 the world's lowest tariff for solar energy. Globally, the cost of solar energy dropped by 82% in the last decade to become the lowest-cost electricity ever seen.

Fossil fuel divestment? Not yet.

Environmentalists view Gulf states’ ambitions in hydrogen with suspicions. Greenpeace’s Middle East and North Africa senior campaigner Ahmed El Droubi told Al-Monitor, “We don’t see these moves as a clear change in approach unless they are implemented simultaneously with a clear strategy of divestment from fossil fuels."

Indeed, fossil fuels still dominate the world’s energy market as global demand for crude oil amounted to 100 million barrels per day in 2019. The Gulf states, which have some of the lowest production costs globally, are not walking away from fossil fuel production, rather projecting themselves as the last man standing in a decarbonizing world.

In the UAE, massive onshore oil fields were discovered in November 2020, and oil output capacities are expected to increase from 3 million barrels a day in 2016 to 5 million by 2030. “We will not leave any opportunity unturned,” ADNOC’s chief executive told the Financial Times, insisting Emirati oil will still be needed in the energy transition era.

El Droubi emphasized Gulf states’ richnesses extend far beyond having some of the world’s largest oil and gas resources, and include, in particular, “an abundance of renewable energy sources”. Therefore, the Senior Campaigner said sustainable activities “must be at the forefront of government policies”.

The region, weakened by the economic impacts of the COVID-19 crisis and low oil prices, is likely to choose a middle way, however: maintain the flow of hydrocarbon revenues to sustain short-term financial needs while shaping the future by investing in clean energies. In 2015, the crown prince of Abu Dhabi said, “Early preparations are on to ensure that our resources remain sustainable until the last drop of oil."