The UAE could become the first Gulf state to set a net-zero goal, raising questions over emissions of fossil fuels produced to power the global economy. 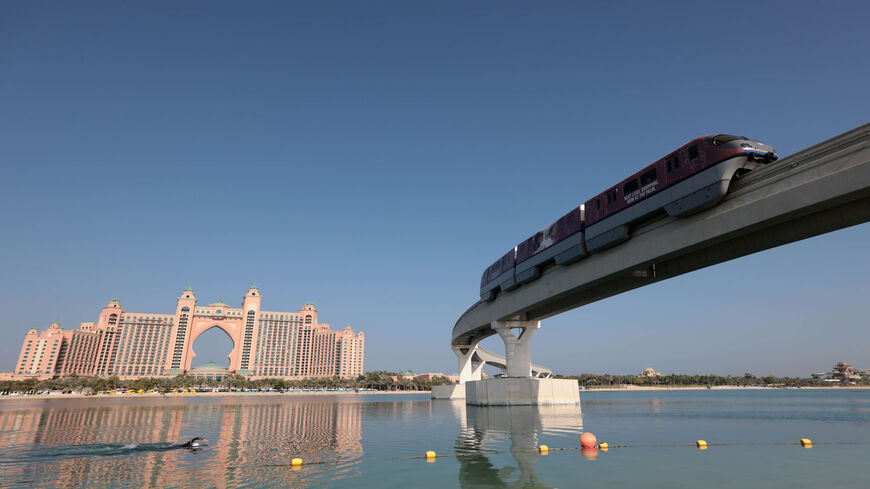 A man swims near a section of the Palm Jumeirah monorail, with the Atlantis Hotel in the background, Dubai, United Arab Emirates, Nov. 16, 2020. - Giuseppe Cacace/AFP via Getty Images

The United Arab Emirates (UAE) is considering setting a net-zero goal, people familiar with the discussions told Bloomberg. If the federation of seven sheikhdoms and nearly 10 million inhabitants declares a net-zero goal, it would become the first Gulf oil producer committed to achieve a balance between emissions produced and emissions taken out of the atmosphere.

As of April 2021, 44 countries and the European Union have pledged to meet a net‐zero emissions target, the Paris-based International Energy Agency (IEA) reported. A long-awaited United Nations report published on Aug. 9 says evidence is unequivocal that humans are causing climate change, in particular by burning fossil fuels, and UN Secretary General Antonio Guterres called for action to avert a climate catastrophe.

“Whether it is the United Arab Emirates, China, Japan or the United States, it is already important to have a net-zero goal, then comes the obvious debate over how credible this is and how are they going to get there,” stressed Assaad Razzouk, a Lebanese-British renewable energy entrepreneur based in Singapore who hosts The Angry Clean Energy Guy podcast.

Reducing global carbon dioxide emissions to net-zero by 2050 is consistent with efforts to limit the long‐term increase in average global temperatures to 1.5 degrees Celsius (2.7 degrees Fahrenheit), the IEA estimated. Yet climate scientists called net-zero a dangerous trap, as “net” implies human-caused emissions will continue to rise, though compensated by offsets, like carbon capture and storage, or natural solutions such as vast tree planting programs.

In the Gulf region, “Protecting carbon-sequestering natural habitats such as mangroves is an important step toward a net-zero world,” noted Huda Shaka, expert in sustainable cities and founder of The Green Urbanista, a blog on sustainable development in Arab cities.

Saudi Arabian state oil giant Aramco said it planted 2 million new mangroves in 2020 and expects each tree to sequester up to 1.5 tons of carbon over its average 60-year lifetime.

Sayeed Mohammed is an environmental policy analyst and director of policy and strategy at the Qatar-based Arab Youth Climate Movement Qatar (AYCM). He warned about the effectiveness of tree planting projects, telling Al-Monitor, “Those trees are not just gonna directly suck in carbon dioxide. It is a natural habitat, it takes time to grow and start absorbing carbon dioxide.”

Gulf countries “did not defend themselves properly”

Globally, a Gulf petrostate committing to net-zero goals could spark debates over emissions that occur during the production of carbon-intensive natural resources intended for export.

According to the United Nations Framework Convention on Climate Change, emissions calculation is production-based, meaning greenhouse gases emitted during oil and gas drilling get counted for net-zero. But Gulf analysts deem the production approach unfair.

Indeed, a significant chunk of the region’s emissions — Gulf states top the world’s ranking of carbon dioxide emissions per capita — is caused by the production of fossil fuels ultimately shipped abroad to power the global economy. “About 70% of Qatar’s emissions are being exported,” Mohammed told Al-Monitor. Qatar is the world's top exporter of liquefied natural gas; Saudi Arabia and UAE output quotas are 11.5 and 3.65 million barrels of oil per day, respectively.

Gulf countries “did not defend themselves properly” since climate negotiations started in 1992, Mohammed said. “The Paris Agreement in 2015 was the right time for them to make a point, but they missed it, and now it is too late [to demand an equal share between producers and clients of the responsibility of emissions linked to fossil fuel production]”, he added.

Beyond questions over fossil fuel emissions, a net-zero approach would raise scrutiny over the Gulf’s power sectors that, despite the region being renewables-rich, still rely on fossil fuel-fired power plants to meet some of the world’s highest demand in electricity per capita.

The UAE targets clean energy to account for 44% of its energy mix by 2050.

“The key changes relate to two areas: demand reduction and zero-carbon supply,” Shaka said. On the demand side, the gradual downsizing of subsidies on carbon-intensive resources such as electricity and water — as part of a broader move to streamline state expenditures — is likely to help to rationalize consumption. This will contribute to limiting use of desalination plants that supply high carbon footprint drinking water and reject brine in the Persian Gulf.

But while a mammoth undertaking will be necessary to reign over greenhouse gases emissions, the region’s journey toward sustainability could be facilitated by a high degree of urbanization, which, studies suggest, contributes to unlocking economies of scale in terms of energy consumption. Across the Gulf, between 84% and 100% of people live in cities.

A key area of progress would be to improve energy efficiency as an IEA July 2021 research stated, "Countries cannot meet their climate targets without optimizing building energy efficiency and energy demand.” Green-accredited buildings are still rare in the Gulf region — only 12 in Kuwait and Oman — and the use of smart sensors for lighting and thermostats, artificial intelligence-driven energy efficiency algorithm is still in its infancy.

The UAE stands as a regional exception with 869 green-rated buildings and subjecting all new buildings since 2014 to the Green Building Regulations and Specifications. “Urban planning policies can incentivize energy-efficient buildings and plan for integrating zero-carbon energy production within the built environment,” Shaka noted.

Transportation — responsible for 24% of global carbon dioxide emissions — is also a major contributor to Gulf states’ nonoil production emissions. But changing a carbon-intensive lifestyle is not easy. “Omani authorities face difficulties in changing people’s mentalities, especially in decreasing the dependence on cars,” said Islam Bouzguenda, a social sustainability expert who lived in Oman and is now a lecturer at the University of Twente, the Netherlands.

There is “not much progress” in making Omani cities more walkable, she told Al-Monitor.

On the business side, net-zero is likely to impose a spurt upon Gulf nonoil economies. “The UAE, in particular, has an opportunity to become a global green supermajor, as do other Gulf states, because otherwise it is going to be a massive missed opportunity,” said Razzouk. The entrepreneur believes the sunshine-rich region has an edge in hard-to-decarbonize sectors, including steel, cement and aluminium production, and sea freight and air transport.

Indeed, abundant solar resources position the oil-rich region as a natural player to produce cost-competitive green hydrogen. The energy carrier made by using renewable electricity to electrolyze water is increasingly viewed as a solution to power harder-to-abate industries.

“Solar aluminium is a step forward — using a natural and abundant source of energy in our desert environment to make a metal that is vital to our planet’s future,” said Abdulnasser bin Kalban, CEO of EGA. And steel and aluminium produced using renewables are likely to gain traction as the United States and the EU plan to start levying carbon border taxes on the import of products made with high carbon output.

The UAE committing to a net-zero goal would “add to the general reputation of the Gulf region” and “encourage” the wider region to be more climate-conscious, Bouzguenda said.

Yet the opportunity to emerge as green supermajors does not signify a reduction in crude oil exports, particularly in Asian countries where economic growth pushes up oil demand. Gulf states said they would pump out the last drop of black gold the global economy will consume.

Mohammed noted it is unlikely that any other Gulf state other than the UAE will announce a net-zero plan before the 26th UN Climate Change Conference of the Parties in October. “As for Qatar, I do not think so. From my conversations with officials, they don't really have such an appetite for a net-zero plan,” the environmental policy analyst added.

And among all the Gulf petrostates, Saudi Arabia stands out for its pro-fossil fuel statements. Just a few weeks after Crown Prince Mohammed bin Salman announced a green initiative to plant 10 billion trees in the coming decades and slash carbon dioxide emissions, the Saudi energy minister mocked the IEA road map to net-zero by 2050. Abdulaziz bin Salman said, “It [IEA report] is a sequel of the la-la land movie. Why should I take it seriously?”