Yemeni Girls Turn to Solar Energy To Keep Power On

A team of teenage girls who were “tired of darkness” invented solar-powered appliances and created a company that is selling and distributing them around the country, writes Nafeesa Syeed. 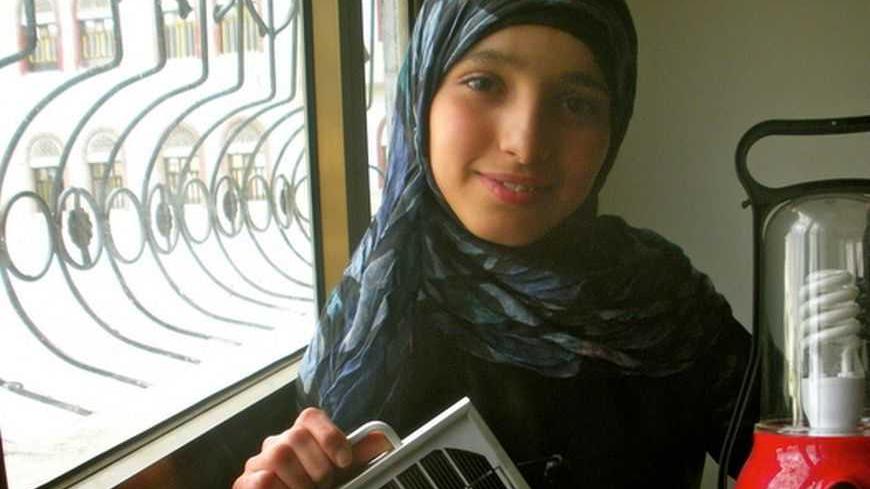 Wafa Al-Rimi, poses at her school in Sanaa, Yemen. The 16-year-old serves as CEO of the student company, Creative Generation. - Nafeesa Syeed

SANAA — For Wafa Al-Rimi, Yemen's revolution brought dark days. Though power outages are frequent in the country, Al-Rimi says during the past year's unrest, some days saw less than an hour of electricity.

Attempting to study for exams in those conditions got the 16-year-old and some of her classmates thinking: How could they keep the lights on?

"We were tired of darkness," Al-Rimi says. So, they turned to the sun.

Through an entrepreneurship program at their government school, an all-female team invented solar-powered appliances and established a company, Creative Generation, through which they've vended their wares to hotels and government offices. In November, they were named “best company of the year” in a regional competition for young Arab entrepreneurs organized by INJAZ Al-Arab, the regional member of Junior Achievement Worldwide, a Colorado-based business education organization. The Yemeni students say their motivation has always been to help their society. In the process though, they say they've also paved new possibilities of leadership for young women in a society where custom can keep females out of the workplace.

Inside a conference room at the Syeda Zainab school, in a lower-middle class neighborhood in Sanaa, Yemen's capital, Al-Rimi, CEO of Creative Generation, gathers with her classmates-turned-coworkers. In a printed headscarf, her canvas sneakers peek below her sheer black abaya. She displays a large, blue-and-green patio umbrella. A rectangular solar panel is fastened to the canopy's outer cover, while a light bulb and USB charging port hang below. Nearby, rest the students' other contraptions — a red lantern as well as a fan similarly equipped with a light and USB charging outlet.

Their efforts began July when INJAZ Yemen, affiliated with the regional INJAZ nonprofit group, brought together 16 girls from the school and a couple of college students for a business training program. Volunteers from Yemen's private sector taught them about corporate structure, accounting, market research and other administrative elements. Charged with setting up their own firm, Al-Rimi suggested exploring renewable energy, so they read up on the field and did research to see what was out in the market. They settled on small solar-powered devices. With pointers from an engineer, they wired up the ready-made umbrellas, fans and lanterns to batteries and solar panels while adding touches such as USB chargers. The girls had to sell stocks and shares to raise seed money to get the production going.

"In Yemen, we have abundant sun," says Reem Rashed, 16, who works in the company's human resources section. "We need to exploit solar power because it's a favorable, free energy and it does no damage to Yemeni society."

From left to right, Reem Rashed and Wafa Al-Rimi, who helped found their student company Creative Generation, display a solar-power fan and lantern that they produced. (photo by: Nafeesa Syeed)

They wanted something more powerful than say candles but less detrimental than gas-powered generators which rumble from homes and shops here during blackouts. Their appliances can run between six and 12 hours after batteries capture the sun's rays. Through advertising in newspapers, local TV stations and Facebook, their clients have included the ritzy Mövenpick Hotel in Sanaa, which bought five of the outdoor umbrellas — at $150 apiece — for a play area. Money from their sales went back into the company. They say there's demand for the products, but they're now working to lower manufacturing costs to make the machines more affordable for the average Yemeni.

The girls may be on to something. In a November report, the International Renewable Energy Agency, based in Abu Dhabi, ranked solar — along with biomass — at the top of Yemen's available renewable energy resources, with the country possessing several areas to produce significant solar power. In addition, among the effects of climate change in the Middle East and North Africa, the World Bank cited in a study last month that changing weather will impact the region's energy supply and demand as well as water reserves — both sectors that could benefit from alternatives to fossil fuels. "The Arab region has vast areas that are rated as prime sites for solar energy production," the World Bank says. "There is a huge potential for the development of renewable energy resources such as solar and wind."

In Yemen, some public-private partnerships and NGOs have delved into the solar industry on a modest scale. But with steep capital and infrastructure costs, some local energy leaders say there needs to be more government involvement and incentives to launch mass solar energy production.

Although the young women's approach has been to start small, just getting off the ground has proven to be a big feat. Initially, many parents were hesitant about their daughters' involvement. The girls went on their own to markets to buy solar panels and other materials; met with clients to conduct sales pitches; and spent extra time at school assembling the gadgets. None of the girls' mothers work outside the home and their fathers are mostly employed as police and army officers, teachers and lawyers. Their elders prodded: "Why do you have to go out?"

"In Yemeni society, we have customs and traditions for a girl — at a set time, that's it, she stays at home and doesn't go out much — but a boy is a boy, he can go in the street or anywhere. We go to school and home, and that's it," says Al-Rimi, the CEO. She worked to win over her parents. "We told them we were doing something for society," she says. "Afterward, my mother and father saw that they had to support me, they had to encourage me."

With their families' blessing, they performed the improbable: Six of the girls traveled — without their parents — to Qatar for the regional INJAZ student company competition, after winning the country-level contest against student firms formed at other Yemeni schools. Yasmin Al-Harazi, 16, who heads the finances department, says at first, her parents said she couldn't go, but eventually they gave in. At the competition, the girls chose to wear traditional Yemeni dresses, with red and silver designs, instead of the black abayas they typically wear, saying they wanted to represent their culture. The reaction from their fellow Arabs only inspirited their desire to raise the image of their homeland.

They placed first with ALGreenIA, also an eco-oriented company from Algeria, out of 13 student companies from across the region participating in the contest. They got grilled on the nature of their product and company administration by the heads of major corporations, including Aramex, ExxonMobile Qatar Inc. and HSBC Bank Middle East Qatar. After the announcement, there were shrieks and tears. (This year, INJAZ Al-Arab says students from more than a dozen Arab countries set up 240 companies in its affiliated programs.)

Munir Ali Daair, the chairman of Dome Trading & Contracting Co., a Sanaa-based contractor for the oil and gas industy, who also leads INJAZ Yemen, says he anxiously watched the girls contend in Qatar. "I believe that we have undermined our religion, undermined our culture, undermined our society, undermined our economies, by undermining the role of women," Daair says.

While they gained practical skills and recognition, the girls say the reverberations of the experience run deep. "We developed ourselves. We showed that the Yemeni woman can do the impossible and she can participate with the man in everything," says Yousra Rashed, who at age 12, is the youngest in the lot. "Yemeni women have great potential to do many things — if they are given the opportunity."

They speak of a newfound self-confidence. "Before I joined the company, I was a very shy person — very shy," says Al-Rimi, who found herself having to steer meetings and delegate tasks. "After time, my personality became stronger and stronger and the shyness ended."

As a group, they have big plans, saying they want to expand Creative Generation to one day include solar plants and factories to power buildings across Yemen. Some also are charting their personal ambitions. Widad Al-Jaradi, a 20-year-old college student majoring in business administration and part of the company cohort, aims to start her own venture.

"My plan for the future is to open a company, especially employing Yemeni women, because a lot of fathers and families refuse to let girls work in a company; because they say it's shameful, because there are outsiders there," says Al-Jaradi, who wears a face-veil, like most Yemeni women of her age. She doesn't know yet what her company will focus on, but says she will study what women need and align her products and services to that end.

In her emerging English, the face-veiled Ghadeer Saadah, 20, the only company member to speak the language, passionately asserts that nothing is impossible.

"Yemeni women — she has the skills and can do [anything] — she just missed the opportunity," Saadah says. "If she has it, she is going to do a lot, and she's going to surprise the whole world."