Yemen's rival governments are doing what they can to prepare for the arrival of the coronavirus, but the country's long civil war has taken its toll on resources and people. 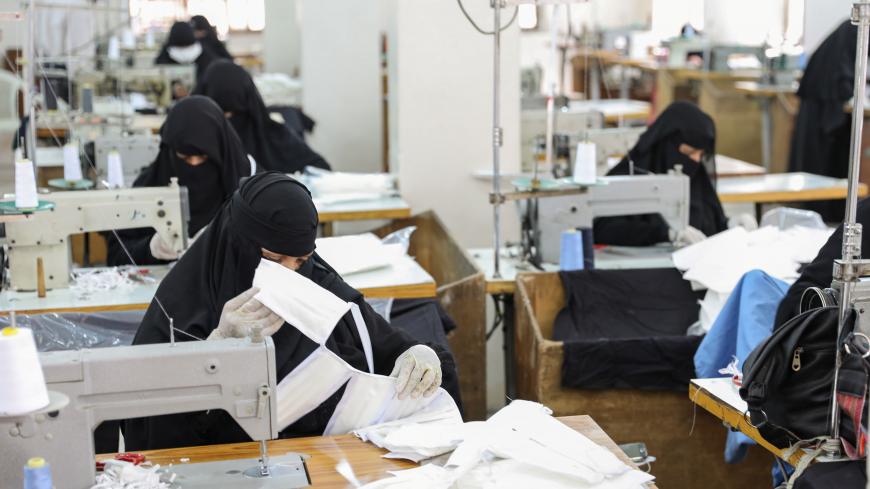 Workers make protective face masks at a textile factory amid fears of the spread of the coronavirus in Sanaa, Yemen, March 17, 2020. - REUTERS/Khaled Abdullah

SANAA, Yemen — Yemen is trying to get ahead of the coronavirus crisis, but it faces a daunting task. Though it hadn't reported a single case of COVID-19 as of March 24, the country's medical infrastructure, debilitated from five years of civil war, and its fractured society leave it especially vulnerable to the pandemic.

Taha al-Mutawakel, health minister for the Houthis' National Salvation Government, held his first news conference on the virus March 21. He warned that 93% of the country’s medical equipment is out of service because of Yemen's civil war between the Iran-affiliated Houthis and the UN-recognized, Saudi-backed Government of National Accord (GNA) of President Abed Rabbo Mansour Hadi.

Meanwhile, GNA Prime Minister Maeen Abdulmalik said schools in his government's areas were closed for a week and health professionals were testing travelers arriving at the country's entry points. The Health Ministry has designated $4 million to combat the virus.

The Houthis' National Salvation Government has also taken several precautionary measures, closing all educational institutions, cafes and wedding halls in Houthi-controlled areas, and postponing other events, including press conferences. The measures included closing the Sanaa airport, which has been under travel restrictions since 2016. On March 16, Houthis ordered the closure of all land crossings between GNA-controlled provinces and Houthi-held provinces in the north for two weeks.

However, these measures had not been fully implemented, as social media users criticized Hussein Maqbouli, the Houthi-led government's deputy and head of the Supreme Committee for Combating Diseases, of violating his own orders when he attended a wedding March 19.

Still, several halls, parks, gardens and hookah cafes in the capital Sanaa have abided by the measures.

Ahmed al-Jaradi runs Paradise Restaurant, which has a hookah room in its basement. He welcomed these measures, which he heard about via the internet.

“My sole concern is if the virus spreads, my restaurant will be closed,” Jaradi told Al-Monitor March 20, pointing out that he has 13 employees working for a dwindling number of customers.

“I can't say I'm [financially] lost” at this point, he said. “The real loss is when the virus spreads.”

Al-Monitor noticed no open hookah lounges March 20 in Sanaa, and saw no buses or travelers at Sanaa’s largest bus station, which is used as a transit point between the capital and southern provinces, as well as neighboring countries.

Daoud Khuzai, an officer at al-Noor Travel Agency at the bus station, was sitting at his desk that afternoon. He said no client had entered his agency for the past three days.

“I didn't expect to see the day when we have no clients,” Khuzai told Al-Monitor. "Our estimated loss is about 3 million Yemeni riyals [about $12,000].”

There are small buses traveling to southern provinces, he said, but the problem is that no bus filled with passengers is allowed to return and enter Houthi-controlled areas. This measure has led to a 30% spike in ticket prices, he said, because the buses return empty.

“When the bus driver travels and comes back, he is [possibly] infected himself,” said Khuzai, stressing that no driver has been submitted to quarantine so far. “I pray this virus won't enter Yemen, because our capabilities aren't like those in China, Iran, France or Italy."

He concluded: “If it enters Yemen, we will be exterminated within a month.”

Abd al-Nasser Abu Bakr, head of the department for combating infectious diseases at the WHO office in the Eastern Mediterranean, told CNN Arabic on March 19 that he expected "an explosion in the number of coronavirus cases in Syria and Yemen."

War-ravaged Syria, Libya and Yemen were the only Arab countries free from COVID-19 at the time of Abu Bakr's statement. However Syria announced its first case March 22 and Libya just reported its first case earlier today, making Yemen still the only country with no recorded case in Middle East as well as in the Arab world.

As the Houthis' health minister was giving his news conference March 21, Al-Monitor was speaking with seamstress Entesab Saleh in Sanaa. She is one of Yemen's women who have stepped up to help in the battle against COVID-19.

“I'm here to alleviate the extent of an imminent disaster the virus [could pose],” said Saleh as she sat at her sewing machine in a textile factory. Since March 18, she has woken up every morning with the sunrise to make breakfast for her family of 10 girls and three boys, before heading to the factory to manufacture protective face masks.

Saleh is one of 160 women working in the factory on some 80 sewing machines, between morning and evening shifts, to make about 16,000 protective masks per day, according to Abdo Ali Atef, general manager of the ready-made garment department at the factory, which had been closed. The Houthi-run Ministry of Trade ordered work to resume there in early March.

Atef said all the masks produced will be provided to government institutions and hospitals. Several pharmacies in Sanaa are running out.

Strangely enough, though, no employee at the factory was seen wearing a mask. Asked why she wasn't wearing one, Saleh said she doesn't fear the virus.

But late March 22, the Houthi government led by Abdel-Aziz Bin Habtour announced a new package of preemptive measures against COVID-19, which shows that officials believe the WHO’s official warning that an explosion in the number of cases in Yemen is imminent.