Yemen survived four years of a cholera epidemic, but its fragile health system could collapse under a coronavirus outbreak. 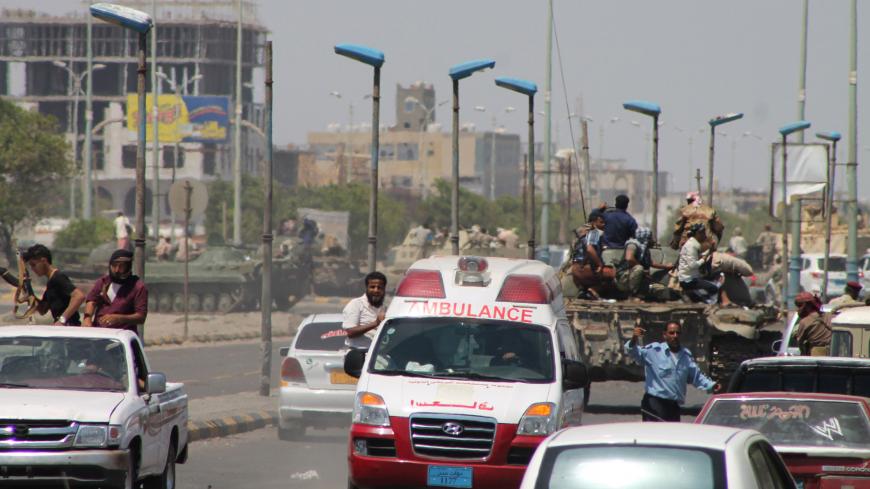 An ambulance drives past a convoy of armed militiamen, Aden, Yemen, March 19, 2015. - STR/AFP via Getty Images

SANAA, Yemen — At a cafe in Sanaa the night of Feb. 27, a pharmacist sat at a table waiting for his order. He was wearing a mask over his mouth and nose. When asked why, he said it was a "precautionary measure" against coronavirus.

“Health officials aren't able to distribute masks, so they agreed on the narrative that Yemen has zero coronavirus cases,” he said.

To the right of the pharmacist, a construction worker, who requested not to be identified, made fun of our discussion about coronavirus. He kept calling the waiter “coronavirus” to order tea and extra bread. He said it was the first time he had heard of it. He said it sounded like "cholera, which means Yemenis will overcome it and will not panic in any way."

As coronavirus cases spread dramatically in the Middle East, with the World Health Organization (WHO) announcing Feb. 28 that the virus has been found in at least 56 countries worldwide, Yemen seems to have so far been spared. Health officials from both Yemeni warring sides have bragged about taking precautionary measures, including repatriating Yemenis from China, where the virus was first identified.

Houthi health official Abdul Hakim al-Kuhlani said Feb. 23 that 193 Yemenis had returned from China and had undergone temperature checks, testing negative for coronavirus. About 20,000 Yemenis live in China, with 187 Yemeni students and their families in Wuhan — the Chinese city where the virus was first reported. The latter are stuck in Wuhan amid travel restrictions.

Kuhlani’s statements came a day after Yemen's ambassador to China, Ahmed Jaber, said that an evacuation of Yemeni students in Wuhan was underway, but that they had not yet been transported to the United Arab Emirates.

According to a circular from Yemen's embassy in China, the evacuation of Yemenis living in Wuhan was to start Feb. 29. They were supposed to head to the UAE and be placed in quarantine, yet it's unclear if the plan is underway.

“So far, 193 people have tested negative,” Kuhlani told Al-Monitor Feb. 26. He pointed out that he received these figures from WHO and the Civil Aviation that works in air, sea and land ports under the internationally-recognized government.

Kuhlani said the Houthi-run Health Ministry in Sanaa receives figures on a daily basis from the Saudi-backed government in Aden and the Seiyun Airport in Hadhramaut, as well as from the Shahin and Serfeet land crossings on the border with Oman. He said, however, the cooperation between the Houthis and government is limited and indirect, as it is being conducted through a third party, namely the WHO.

A Yemeni photographer published an image on Twitter Feb. 28 of a medical team at the Houthi-controlled Ufar land crossing testing travelers onboard buses.

However, despite the Yemeni authorities’ — both Houthi and from the Saudi-backed government — assurances that coronavirus case has not been detected at the country’s ports, there have been concerns about the effectiveness of precautionary measures in a country where half of the population is vulnerable to such diseases. The United Nations Office for the Coordination of Humanitarian Affairs reports that an estimated 19.7 million Yemenis “lack access to basic healthcare.”

Meanwhile, CNN referred to a British study on coronavirus that stated, “Temperature checks will fail to detect a coronavirus infection nearly half the time,” raising the possibility that Yemen's fragile health care system can’t detect the virus.

The WHO office in Yemen downplayed the likelihood of a virus outbreak in Yemen, which is in line with the official Yemeni narrative that Yemen has no confirmed coronavirus cases.

“While the #2019nCoV virus spreads in some countries, the risk in #Yemen remains low," WHO in Yemen tweeted Feb. 9. "WHO Yemen is working closely with the health authorities and partners to ensure preparedness and readiness to respond if necessary.”

The UAE — which confirmed its first coronavirus case Jan. 29 — said in mid-February it would help evacuate Arab students from China, without naming Yemen. Meanwhile, Yemen's Foreign Ministry thanked the UAE Feb. 19 for its support in evacuating Yemenis from China.

However, by Feb. 26, the evacuation process of Yemenis in Wuhan was not yet underway. Some of the students in Wuhan said they were impressed by China’s actions to prevent it.

“China is making great efforts to confront this virus,” Yemeni student Ammar Yaser said in a video published on the Chinese Embassy to Yemen Twitter account Feb. 12. “China is doing a lot of things to keep citizens and foreigners safe.”

The government-affiliated Health Office in Aden announced Feb. 24 that it would suspend the establishment of quarantine zones at al-Sadaqa Hospital after the hospital’s staff and locals rejected these measures in the populous neighborhood. However, other isolation centers have been established elsewhere, including at the Aden Airport, al-Jumhuri hospital and Saleh al-Din City as well as at Seiyun Airport.

In a country that has been plagued by the worst cholera epidemic in recorded history, two quarantine centers were established at the Sanaa International Airport and the nearby Zayed Maternity and Children's Hospital.

Although no passengers have passed through the Houthi-controlled Sanaa Airport, the UN staff who use it for humanitarian flights go through the precautionary measures, according Kuhlani.

At the Zayed Maternity and Children's Hospital, a quarantine center funded by WHO and executed by the World Food Program was ready to receive infected people by Feb. 15. Al-Monitor visited the center before noon on Feb. 24.

A bodyguard was lying on his back in the shadow of one of the center's one-story buildings with a handkerchief on his head masking his nose and mouth, in what appears to be a protective measure.

No staff were seen or heard. Taking photographs of the center requires permission from the hospital's director, the bodyguard said. He later allowed us to take photos of the outside, with a media officer monitoring us.

“The staff is available on call,” said the general director of the hospital, Riyadh al-Shami.

“Quarantine centers are established so when there are cases tested positive at land, sea or air ports, they can be transferred to this center for isolation,” Shami told Al-Monitor.

An outbreak of the coronavirus in Yemen is more likely with the return of Yemenis living in Wuhan, the epicenter of the virus.

Such a scenario could bring Yemen's health system to the brink of collapse if the WHO or concerned health bodies are not on alert, as 80% of Yemen's 29 million residents are already in dire need of some form of humanitarian assistance.