The West must reach out to Turkey

Turkey needs sensible friends at this critical juncture who will both understand the severity of the threat the nation has faced and also urge it to respect the rule of law. 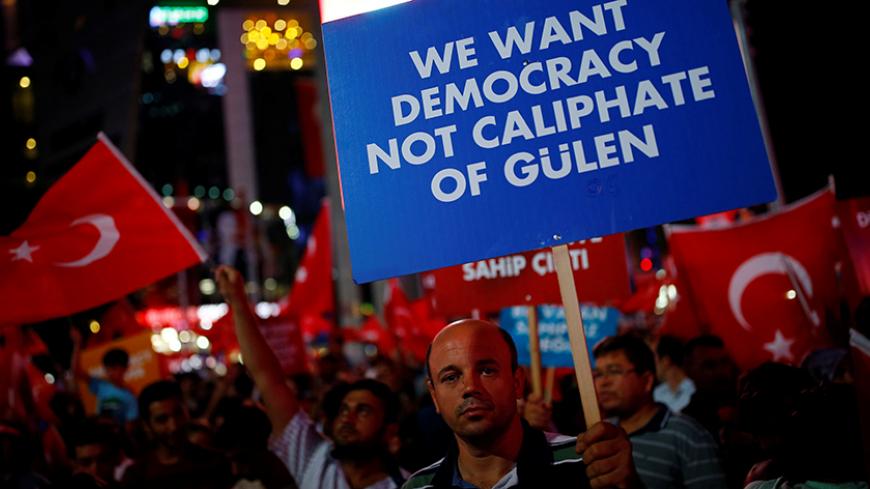 A man holds a banner as he and others gather in solidarity night after night since the July 15 coup attempt in central Ankara, Turkey, July 27, 2016. - REUTERS/Umit Bektas

If you want to see the likely national consensus in Turkey on the Western response to July 15's failed coup attempt, take a look at these lines by Soli Ozel, political scientist and columnist for the centrist daily HaberTurk:

“Both EU politicians and Western media outlets preferred to see July 15 only in the context of the previous political developments. They neglected the invaluable democratic resistance shown by all political parties in a parliament bombed by war planes. That no one came to Turkey from EU institutions (with the exception of a UK minister) to offer solidarity with the Turkish parliament, the founding institution of the nation, shows a lack of sensitivity, empathy and solidarity that cannot be easily digested.”

It might also be helpful to note that Ozel is not a pro-Erdogan Islamist. He is a Turkish Jew, a secular liberal and an outspoken critic of the Erdogan regime. Moreover, he is only one of the many prominent Erdogan critics in Turkey who stood up against the coup attempt and who now are very critical of the feeble Western response to it. Some even think that the West, in particular the United States, was complicit in the coup plot, given the continued support that Fethullah Gulen, who is now nationally seen as the leader of the coup, finds in the West.

The reason for these views is not that all Erdogan's critics have become Erdogan apparatchiks overnight. The reason is rather that they have all been aware of a fact that goes largely unnoticed in the West: Post-Kemalist Turkey, which began to emerge in the second half of the past decade, has been dominated by not one but two Islamist powers: One was Erdogan’s Justice and Development Party, which is a political party and mass movement with overtly authoritarian tendencies that are clear to everyone. The other one was the Gulen community, which is a hierarchical and secretive cult whose burning lust for power was concealed by its misleading façade of “moderate Islam.”

Since most Western observers have ignored the Gulenist factor and have focused only on Erdogan, they have interpreted the coup attempt only in terms of Erdogan as well. Was this perhaps a “self-coup” that Erdogan organized to deepen his authoritarianism? Isn’t the post-coup “crackdown” nothing but Erdogan’s new purge of all opposition? Isn’t this whole “parallel state” story nothing but a pretext to cleanse the government of non-Erdoganists? Given the history of other authoritarian regimes, these questions made sense to a lot of people who were not fully aware of Turkey’s peculiar complexity.

Turkey’s own liberals, leftists and Kemalists, however, know the more complicated truth: In the past decade, there have been two opposing Islamist powers at work. And the more secretive one proved far more dangerous on the night of July 15 with a bloody coup attempt that hit the nation at its heart. That is why they now side with Erdogan on this particular issue — the issue of cleansing Turkey of the “parallel state” of the Gulenists — while maintaining their reservations about the illiberal nature of the Erdogan regime.

None of this means that the anti-coup response in Turkey cannot indeed be a stepping stone to a more authoritarian future. First of all, the very secretive nature of the Gulenists makes it very possible to turn the Gulenist purge into a witch hunt: Since most Gulenists in Turkey hide themselves as a survival tactic, the search for them could easily unearth uninvolved individuals. There is a zeal among hard-core Erdoganists to blame every critic of Erdogan as a “crypto-Gulenist.” The more this fanaticism turns into action, the more it can make Turkey a very scary country.

That is why Turkey needs sensible friends at this very critical juncture — friends who will understand the severity of the threat the nation has faced, but will also urge it to respect the rule of law. Western governments, institutions and media organizations can play this critical role, but only if they begin by understanding what is really going on.

A rare Western opinion leader who grasped this key point is Carl Bildt, the former prime minister of Sweden, who recently wrote a notable piece, “Europe, Stand up for Erdogan.” Bildt explained the severity of the coup attempt and criticized Western institutions for only focusing only on the anti-coup measures. “Europe risks losing its moral authority if it does not appear particularly engaged in dealing with the coup itself,” he warned. Acknowledging the signs and risks of an excessive crackdown, he added:

“The EU would be in a far better position today if EU leaders had gone to Turkey immediately to express their horror at the coup, congratulate the people of Turkey for defeating it and sit down with the president, the government, the leaders in the Grand National Assembly and others to discuss how to collectively ensure a democratic and European path for Turkey.”

On the brighter side, Thorbjorn Jagland, secretary general of the Council of Europe, visited Turkey this week and acknowledged Turkey's need to “take on those behind the coup.” The chairman of the US joint chiefs of staff, Gen. Joseph Dunford, also visited Ankara and expressed solidarity. These are welcome steps, but much more is needed.

Otherwise, Turkey, a nation always too prone to conspiracy theories, may take Western negligence, ignorance or bias as evidence of Western enmity. The result could be a major fallout between Turkey and the West that would be disastrous for both sides. In particular, it would be disastrous for Turkish liberals who still hope to see the nation mature into a liberal democracy.