In an interview with Al-Monitor, Mehmet Simsek, Turkey’s deputy prime minister for economic affairs, expresses optimism on the recent coup attempt's economic effects, saying the only real damage was to Turkey's image in the West. 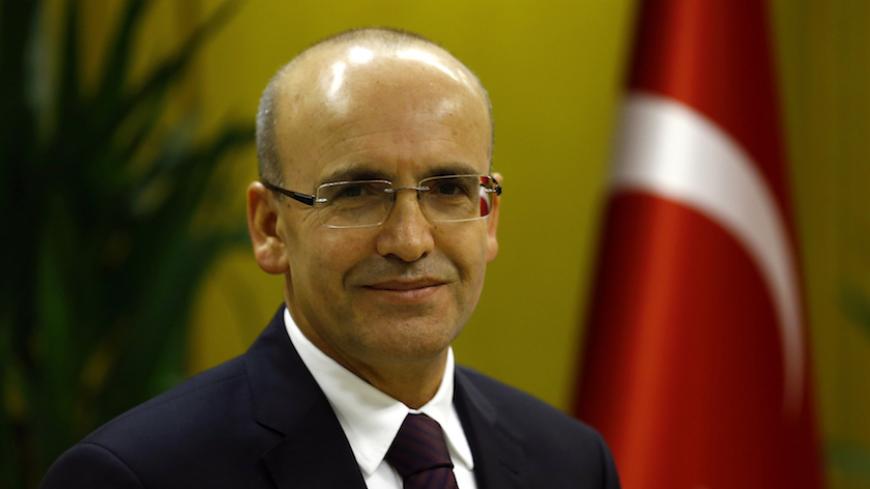 Turkey is trying hard to return to normal after the failed coup attempt. Although one subject is less discussed than others, it is an important issue: the potential effect of the attempt on Turkey’s economy. In an Aug. 4 interview in Ankara, Mehmet Simsek, the deputy prime minister responsible for the economy, spoke to Al-Monitor about Turkey’s financial future. He said he doesn’t expect lasting damage to the country’s economy, but is mostly worried about negative perceptions of Turkey among the Western public.

Al-Monitor:  What short- and long-term effects do you expect the July coup attempt to have on Turkey’s economy?

Simsek:  In the short term, the effects will be temporary and relatively easy to manage. The probability of lasting damage is very low. First of all, the coup attempt did not last long. It was a nightlong bad dream, a nightmare. The trauma for those living in Ankara and Istanbul was greater. Its short duration and failure allowed life to return to normal quickly, hence the minimal effects on the economy.

Al-Monitor:  Have your macroeconomic targets declared at the beginning of the year changed with the coup attempt?

Simsek:  We were predicting 4.5% growth for the year. The data for the first half of the year matched that prediction. In the second half of the year our problems with markets outside of Europe, weakness in our tourism sector and the time needed to restore our reconciliation with Russia may lower the growth rate to about 4%. World trade has slowed down, and global growth will be around 3%. If we can achieve the 4% growth, that will be good, considering the circumstances. If we can manage the process well, as we have done until now, the effect of the coup attempt will be limited.

Our budget continues to be in harmony with our targets and there are no concerns. We don’t expect any problems here.

Turkey is very successful in creating employment. According to the latest figures, Turkey has created more than a million jobs over the past year. This gives a major boost to growth.

Then there is the issue of the current deficit, which was better than we expected in the first half of the year. Lower commodity prices limited the adverse effects of the loss in tourism. The ratio of current deficit to national income has gone down to 3.7%. Even if there is some deterioration in the second half, it won’t deviate much from our goal of 3.9%.

In a nutshell, in the big picture there are no major problems for the Turkish economy.

Al-Monitor:  You don’t expect major effects from the coup attempt on the economy. What is the worst risk that could mar your predictions?

Simsek:  There is only one major risk. The assessments in the West about the coup attempt are not very promising. They are surprisingly negative. But our citizens saved democracy by risking their lives and blocked the attempt. Thinking this was in line with established Western values, we expected more positive assessments.

As it is, Western assessments could become a major problem by affecting decisions about Turkey in the business world. … In this area, we have much to do. Managers of Western companies conducting business with Turkey are wise people. I am sure they are perfectly capable of distinguishing between reality and comments written from ill-informed perspectives. To repeat, the perception abroad is considerably negative. But Turkey’s realities are far better. It is up to us to minimize the gap between their perceptions and reality.

Al-Monitor:  What are you planning to do to close that gap?

Simsek:  We mobilized from day one. We are in constant dialogue and our doors are always open. Hundreds of people participated in teleconferences we held with investors. We invited credit-rating agencies like Moody’s and Fitch, and they came. Our contacts are going well.

Al-Monitor:  What were their approaches? Will there be a reduction in Turkey’s credit ratings?

The major concern of the outside world is whether Turkey can pay its debts after such a major upheaval. The state balance sheet is robust with no problems. Our debts are 33% of national income and continue to fall.

The real problem is with the private sector. If you look at syndicated credits after July 15, there is no problem. Perhaps apart from one or two cases, there is no problem in companies offering bonds. Actually, one of the companies had more demand for its bonds than it marketed. At a time like this, sales of a company's bonds are an important indicator. Turkish companies have always been successful in paying their debts.

Al-Monitor:  The US Federal Reserve, while in the process of increasing interest rates, has negative predictions for developing countries. Added to those now are the political risks Turkey has been coping with in recent years. How can Turkey be differentiated from other developing countries? What is next for Turkey?

Simsek:  For me, the most important thing is for Turkey to leave behind its political uncertainties. We got through a long election atmosphere. Questions generated by FETO [the so-called Fethullah Gulen Terror Organization] that impaired people's perceptions are behind us. Today in Turkey people have a clearer understanding of the political developments of recent years. For example, the [2013 corruption probes] are now seen as a coup attempt by the judiciary and police. We recently lived through a coup attempt. Could there be anything more detrimental to a country? We have to maintain our relations with the West on a rational basis. We just overcame a disaster. Today there are misunderstandings with the West because of this coup attempt. But that will pass. The West will realize that Turkey has solid foundations. Turkey is a reliable partner. This is very important.

We are trying to overcome problems with countries in our region, as we did with Russia and Israel. Solving the problems with regional countries is important. It is also important to preserve our ties with the West and I don’t see any risk to them. That leaves Turkey to rapidly solve its structural problems with reforms. We will do that. This will set Turkey apart from others.

Al-Monitor:  There is a significant difference of assessment between the Western and Turkish public opinion after the coup attempt. You already said this was a key issue. In the West, the deepest concern is damage to the democratic structure in Turkey. What do you think?

Simsek:  Actually, life in Turkey is very normal apart from the FETO issue. For regular people, life has returned to normal. Their lives continue as before. The state of emergency that was declared has not created a situation disturbing the people.

Unfortunately, in the West, they tend to misread developments. If they had a similar act of treachery in their country, how would they have reacted? How could they struggle against a body that has permeated the state?

For example, with talk about the importance of the judiciary — what justice are we talking about when there is an attempt to take over the system by [those] taking orders from an outsider organization? All Turkish sectors are now at peace because of how we have turned back from the brink of disaster. Our people are at ease and comfortable. But the West is not.

Al-Monitor:  After the coup attempt the government took quick measures. Trustees were appointed to companies accused of being affiliated with the Fethullah Gulen group. Their managers are being detained. Some of them are major corporations. Can these operations against private companies pose a systemic risk for the economy?

Simsek:  We are working rationally to avoid risks. We appointed trustees to manage those companies. Their duty is to protect the rights of workers. They are keeping the companies running with wise management so that there should be no major risks.

A decision will be made about FETO in the next 15-20 days [regarding] the companies and the people working in them.

Turkey has been flexible with many issues in the past. For example, there was the terror attack in Brussels and they couldn't restore air transport for over a week. In Turkey, we lived through a much more dramatic terror act but within five to six hours our air transport was back to normal.

Al-Monitor:  Are you planning any measures to support the economy?

Simsek:  As we didn’t identify lasting effects on the economy after the coup attempt, we won’t be needing any dramatic decisions at this time. If any fine-tuning is needed, we will do it. We are working on encouraging investment.

Al-Monitor:  Turkey has another issue that has been going on for some time. Both domestic and foreign investment are weak. Will recent events scare off investors even more?

Simsek:  Despite negative global conditions, investments in Turkey are not that bad. We receive foreign investment that equals about 2-3% of our national income. In reality, investment is not sagging only in Turkey. All over the world investment is slow. This is mainly because of uncertainties. In the world, certain sectors have excessive capacity. There is a deflationary process when prices don’t rise, even go down. Profit margins are falling. In such an atmosphere investment will remain weak.

As for Turkey, we left behind a period of uncertainty. An atmosphere conducive to increasing investment was created. I am not a pessimist. Uncertainties peaked on July 15. From now on there will be improvements. We left the worst behind. But we must address the mistaken perceptions abroad. That calls for special efforts.

Al-Monitor:  My last question is on relations with Russia. There is a normalization process in the political realm. When will economic relations return to their norms?

Simsek:  The forthcoming visit of our president to Russia is an expression of the will to return to pre-Nov. 24 [relations before Turkey downed a Russian warplane]. In some economic fields we will have faster normalization, but that may be slow in some other economic sectors. For example, it was very important for Russia to resume charter flights to Turkey. We took many measures to eliminate their security concerns. 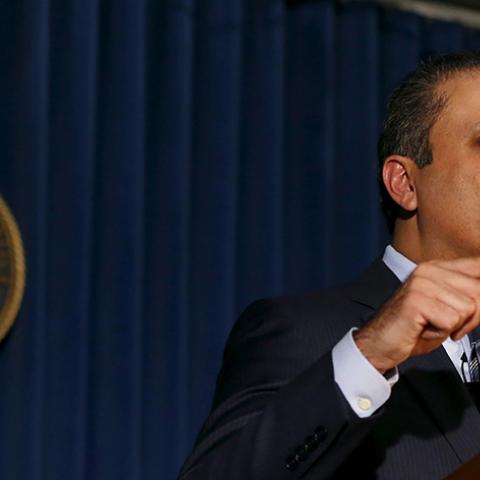 How a US prosecutor is jolting Turkish markets