In an exclusive interview with Al-Monitor, Turkey’s former Minister of Economic Affairs Kemal Dervis asserts, “The perception of the independence of the Central Bank has been shaken.” 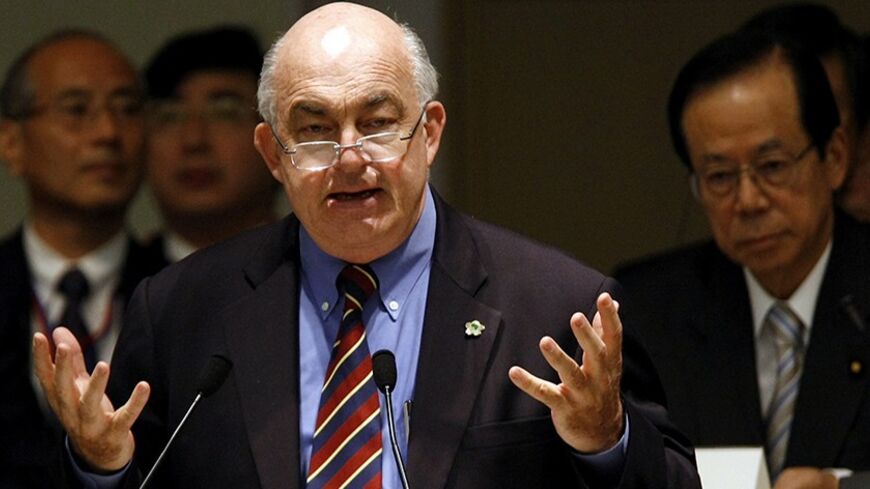 Kemal Dervis, then-administrator of the United Nations Development Programme, delivers a speech at the closing session of the Fourth Tokyo International Conference on African Development (TICAD) in Yokohama, south of Tokyo, May 30, 2008. - REUTERS/Franck Robichon

It was a privilege for Al-Monitor to discuss the latest economic developments in Turkey with Kemal Dervis, vice president and director of the Brookings Institution's Global Economy and Development program and former head of the United Nations Development Programme. As a former minister of economic affairs for Turkey, Dervis is respected as an authority on that country's economy. He, in fact, is known as the savior of the Turkish economy for the extensive, successful reform program that he introduced while minister of economic affairs — in response to the disastrous 2001 economic crisis — and to which subsequent Justice and Development Party (AKP) governments remained loyal. He shared his thoughts with Al-Monitor in an interview in Istanbul on Feb. 1.

Al-Monitor:  Last week, the Turkish Central Bank's interest rates hike increased concern over financial stability in the country. The responses varied, from divided reactions in the business community to the main opposition party [faulting] Prime Minister [Recep Tayyip Erdogan]. Pessimistic analysts claim, “The good times are over," while optimistic analyses recommend not panicking. Is it right to blame any single actor or factor in this situation?

Dervis:  I don’t think there is a single factor … First of all, I don’t think that Turkey in this moment is in a very serious economic and financial crisis. I think it is in social and political turmoil. The economy is not what it was in 2001, when I first came many years ago, because many factors have changed. First of all, the public debt to GDP [gross domestic product] ratio has declined a lot, and that is a very important factor, though you can’t just rely on that. Second, the banks are highly capitalized, and that of course means that they are quite solid, and they can withstand a lot of turmoil. Now, having said that, the situation is difficult and challenging. It is so partly because of international factors. There is a general loss of appetite toward emerging market financial assets — which is to some degree linked to the Federal Reserve tapering policy — but I think that can be exaggerated, as there are such waves. Now, of course those countries that are most vulnerable in such situations are those that are in greatest need of short-term financial capital or, which is the same thing, that have very large current account deficits that are not financed by long-term flows. Unfortunately, Turkey is one of these countries and through that it is vulnerable.

In that context, and this is an ongoing problem, of course as long as other things go well — interest rates are low in the US, are low in Japan, are low in Europe — money comes. But, when there is a problem, either inside or outside, the fact that we need all this short-term money creates a problem. And now we’ve had, not a perfect storm à la Nouriel Roubini — Roubini has predicted lots of storms, some of them come true, some don’t — but we have two problems: one is the tapering in the US and the overall emerging market policies, and we have an extraordinarily tense, extraordinarily confusing political domestic situation where ministers have resigned. There is a huge debate. The confidence in the legal system is deeply shaken, and of course that greatly contributes to the problem. …

Al-Monitor:  In his piece “Talking Troubled Turkey” in The New York Times, Paul Krugman noted, “The larger point is that Turkey isn’t really the problem; neither are South Africa, Russia, Hungary, India, and whoever else is getting hit right now. The real problem is that the world’s wealthy economies — the United States, the euro area, and smaller players, too — have failed to deal with their own underlying weaknesses.” Would you agree with him?

Dervis:  I admire Krugman and very often agree with him, but I don’t think that the Turkish crisis has almost anything to do with what Krugman says. He chose Turkey because it was in the news, but I am quite sure he has not analyzed in detail the situation in Turkey.

The crisis in Turkey is primarily political, I think. When you have a country that is as deeply divided as it seems to be unfortunately, with political language being so harsh, I think confidence falters. The other point I’d like to stress is that macroeconomic policies are one thing, but another very important part of a country’s economic performance is due to institutions, regulation, and a competent and not politically partisan system of economic regulation institutions, such as the central bank, banking supervision, energy, telecom supervision and of course public procurement.

One of the major successes of Turkey in the early 2000s, with the reforms of 2001, 2002 and thereafter, was that day-to-day partisan politics was taken out of the workings of the economy. Of course, politics gives direction to grand policy and gives a country strategic direction, and that is totally legitimate. But, politics is not to be involved in day-to-day market mechanisms, in credit and bank decisions, in procurement decisions and things of that sort. Unfortunately, this has slowly and then rapidly changed again, and the distance between the markets working and the market economy and the political system and the political actors in Turkey has shrunk again, has become very close, and that is extremely unhealthy and is something that turns back the clock from the reforms that Turkey undertook 14, 13, 12 years ago and which it maintained for a while. So, the real problem for policy, I think, has more to do with that than with interest rates or exchange rates or monetary policy.

Al-Monitor:  Is it this sort of environment that brought the independence of the Central Bank into question?

Dervis:  Yes, I don’t know what’s happening, I can’t tell what the debate is behind closed doors, but the perception of the independence of the Central Bank has been shaken.

Al-Monitor:  In case the actions of the Central Bank don’t prove successful or satisfying, the prime minister spoke of his government's "Plan B or Plan C." The Turkish government is also said to be working on a two-step economic reform package to help development, while Finance Minister Mehmet Simsek ruled out capital controls. What do you make of all this discourse?

Dervis:  I don’t really know. I am not in contact with the government on these issues, so I can’t tell, but of course some of the ideas of good regulation and transparency and so on are very good ideas. The problem is that policies that should have been in place way before this almost panic-like situation, when introduced in a crisis moment, may not be very effective. So, one has to distinguish [between] things which can be done and which are good for the economy, like the right incentives and things of that sort, which are fine. But, the problem unfortunately right now goes a little bit beyond that. When you have so many changes to legal regulations, in courts, ministries, when there is such high tension in the country, when the language used against each other by political leaders is so extremely harsh, there is very little that the Central Bank can do about that. It is unfair to ask the Central Bank to fix that.

Now, having said that, there is some hope. We had four candidates of the major parties for mayor of the city of Izmir come together and hold hands [just a few days ago] and present the kind of image that politics should give — which is one of competition, debate on policy, but not one of personal insults and unacceptably harsh language. So, I am not giving up hope, but I think the real issue now is not the question of interest rates and what can be done with the Central Bank. Turkish society has to come to a new understanding with itself and establish political competition that is much gentler and [more] constructive than it is today. That is the real problem. That’s why economists like me can’t do very much about it, or the Central Bank.

Al-Monitor:  Would you then say that the debate on whether the Central Bank’s move came too late does not contribute much to the discussion at this point?

Dervis:  It would have been good to anticipate these political tensions, and certainly it could have been better to gradually increase interest rates before, but as I said, I don’t really believe that is the real issue.

Yet, I am happy that there are elections. If there were no elections ahead of us, there would be nothing to look forward to, so to speak. I don’t know what the results are going to be, but elections, if democracy works, are always a way out of a dead end. If citizens vote without fear and in an open and safe environment, which I hope they will, I think whatever the results are, one will have to respect that, and it will also give a message to the world that democracy is working in Turkey despite all these problems. And I think that there will be some renewal. I don’t know exactly what, but I think that there will be new personalities emerging at the level of cities because these are municipal elections. And I personally believe that the main opposition party, I don’t know by how much, but the Republicans People’s Party and the Turkish social democratic movement will emerge from this strengthened. I don’t know by how much, but I think that will be good for Turkey’s image and good for the economy.

Al-Monitor:  So, despite current predictions of decreased growth and increased inflation in the near future, you believe that we can remain optimistic?

Dervis:  Yes, I think we can remain optimistic. And if we manage the political system in a way to stabilize it and get some renewal, Turkey is a country that can easily grow at 6% a year, with a current account deficit of maybe 5%, and attract long-term investment, which is needed of course, without being forced to attract that much speculative short-term capital.