In an interview with Al-Monitor, Turkey's economy minister says that in addition to IS prompting Turkish businessmen to return to Iraq, trade with Israel remains unaffected despite the current crisis, and 2015 will see an increase in exports and decrease in deficit. 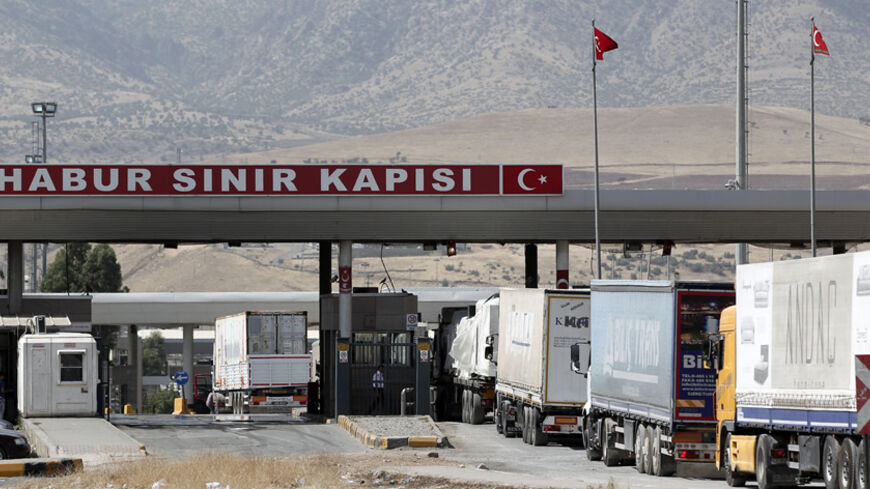 Signaling that the Turkish government does not want the situation in the Gaza Strip to affect the economic ties between Turkey and Israel, Turkey’s Minister of Economy Nihat Zeybekci said in an exclusive interview with Al-Monitor on July 22 that “preventing or restricting private trade” between Turkey and Israel would be illegal and “against the rules of economy.”

Zeybekci also said the Islamic State (IS) is now contacting individual Turkish businessmen to call them back to Iraq. The minister’s remarks indicate this desperate approach by IS could yield some results.

Al-Monitor:  Can Turkey preserve its characteristics of a safe port and attractive market for foreigners?

Zeybekci:  When you look at the ratio of public debt to national income, Turkey is in a better position than 25 European Union member countries [out of 28]. A company coming to Turkey for direct investment has 100% of the rights, incentives and privileges of a Turkish company. They have all the facilities for transferring their profits, and Turkey accepts arbitration. Despite all negative global and regional developments, Turkey has achieved a 30% increase in direct foreign investments in the first half of 2014.

Al-Monitor:  Will you reach the $20 billion [foreign investment] level, as it was before the 2008 crisis?

Zeybekci:  We will grow more than 5%.

Al-Monitor:  You said the ratio of current deficit to gross national product will go down to the 5.5% level.

Zeybekci:  Our medium-term goal was 6.4%. We now see it will go down to 5.5%. This is extremely important for Turkey as it will reduce Turkey’s fragility.

Al-Monitor:  What is your current deficit goal for 2015?

Al-Monitor:  This year, we had foreign currency transfers of $6 billion from unidentified sources. We had more than $700 million of gold exports. All that helped lower the current deficit. Will the current deficit go below the 5.5% level next year?

Zeybekci:  Yes, it will. 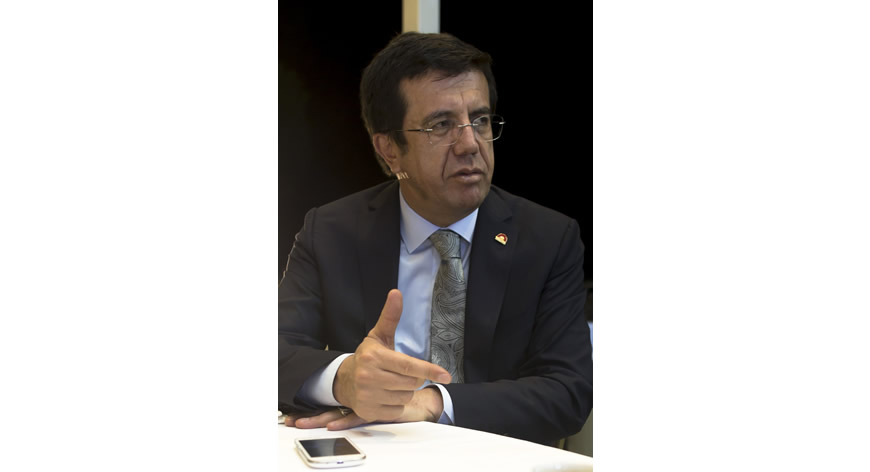 Nihat Zeybekci, Turkey’s minister of economy, speaks during an interview in Ankara, July 22.

Al-Monitor:  What are you doing to reduce external dependency on energy, which is the main element of the current deficit?

Zeybekci:  Turkey must ensure its energy and raw materials for the next 25-50, even 100 years. If we can do that, we can even become an energy-trade hub. We will make important progress in nuclear power in the next 3-4 years. We will have nuclear power production of 10,000-16,000 megawatts and a similar amount from wind energy. Our economy will benefit from energy trade and that will help meet our energy expenses. We will not be a country that produces energy, but a country that trades in it.

Not in favor of hot money

Zeybekci:  I'm not in favor of hot money. I want Turkey to have less need for hot money.

Al-Monitor:  But we need it now, right?

Interest rate should be less than 7%

Al-Monitor:  You always say the ideal dollar parity should be 2.15-2.25 Turkish lira, but it never gets there. The dollar has been lower for some time now. Is that because of high interest?

Not worried about US interest hike

Al-Monitor:  An interest hike is expected in the United States in the middle of next year. Will that cause money to flow from developing economies like Turkey? Are you worried?

Zeybekci:  Personally, I'm not. More than 40% of our exports are to the EU; 70% of direct investments originate from Europe. Decisions by the European Central Bank are more relevant to Turkey’s economy. The European Central Bank is speaking of monetary expansion and much lower interest rates to revitalize the economy. That is why the US interest rate increase in June 2015 won’t affect Turkey all that much, perhaps a bit.

Al-Monitor:  Won’t it accelerate the exit of money from Turkey?

Zeybekci:  No, because our interest rate is still very attractive.

Tensions should not affect trade with Israel

Al-Monitor:  Our exports to the Middle East have been clogged. We can’t use the Syria route and we can’t go to southern Iraq. Relations with Israel are tense but we are using their Haifa and Ashdod ports. Are you thinking of ending the use of those ports?

Zeybekci:  [We are not considering a] change at the moment. We use Israeli ports for exports to Israel and Palestine, not for transiting to other Middle East countries. We are also using Egypt.

Al-Monitor:  What do you say to calls for reducing trade with Israel, boycotting Israeli products?

Zeybekci:  Our volume of trade with Israel is more than $5 billion [a year]. At the end of June, that stood at the $2.6 billion level. This tension should not affect the Turkish and Israeli economies. Neither country is producing in state-owned factories. Apart from the defense industry, we are talking of two liberal economies fully dominated by the private sector. Preventing or restricting private trading is against the rules of economy and will be illegal, unrealistic. It is wrong to attribute the brutal practices of the Israeli state to all the Jews. That would be unjust. In many places, Jews don’t approve what is happening and even protest against it. Our reaction is against the Israeli state and its practices. We firmly denounce them and wait for them to end this savagery.

IS is contacting Turkish businessmen

Al-Monitor:  The Islamic State is blocking Turkey’s exports to southern Iraq. Are you doing anything to overcome this?

Zeybekci:  Of our exports, 70% is to the south of Iraq. We are trying multiple ways of overcoming this obstruction. We go south and follow the Iraqi-Iranian border but this adds significantly to costs, about $2,000 per truck. Sometimes we enter Iran, then exit to Iraq. Turkish companies have signed major contracts in Iraq, promising to keep their shelves stocked. Our exports to Iraq are now down to 35% but Iraq cannot easily substitute other sources. We think there will be a boom in demand soon. We also know that IS is contacting individual Turkish businessmen and telling them, "Come back, we won’t interfere." That is not easy, of course. But when in the future Iraq is rebuilt, it will be Turkey doing it.

Al-Monitor:  Will Russia and Iran be the biggest surprises in Turkey’s foreign trade soon?

Zeybekci:  Yes, there will be major increases in exports to Iran, Russia and Turkic republics, with Iran leading the way. Our volume of trade with Iran at the end of 2015 will be $35 billion. Today, we have exports of $6.5-7 billion. This can easily go up to $15 billion. Also, Iran has very strong tourism potential. Turkey is the most popular country for Iranians. There will also be major and quick developments in trade with Russia, but I won't be able to give any details at this moment.