Was Iranian negotiator arrested for spying?

Iranian media outlets have reported that a member of the nuclear negotiation team was arrested for spying for the British government, but Iranian officials have not confirmed the news. 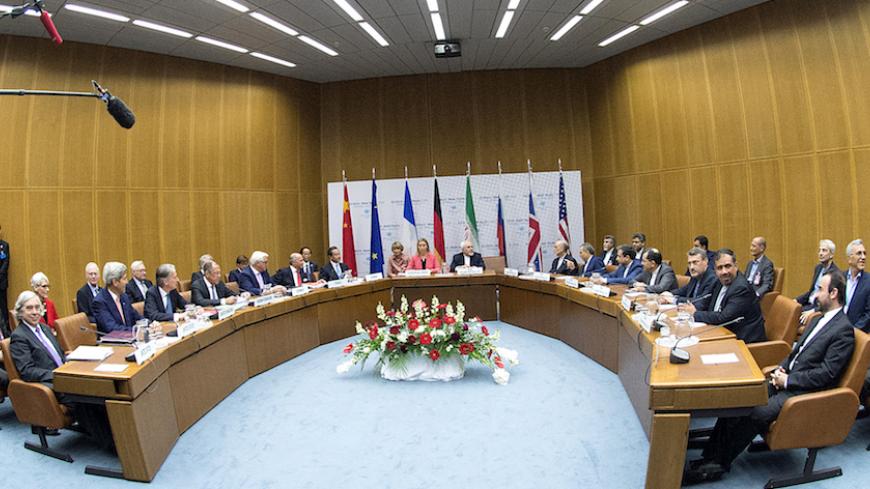 A plenary session of ministers and officials from the P5+1, European Union and Iran meet at the United Nations building in Vienna, July 14, 2015. - REUTERS/Joe Klamar

Tehran prosecutor Abbas Jafar Dowlatabadi announced Aug. 16 that Iran had arrested another dual national in the country. According to Dowlatabadi, the individual had links to British intelligence and was “active in the economic field.” Dowlatabadi did not share any other information about who the person is or when the arrest took place.

On Aug. 23, conservative website Nasim Online published a thinly sourced article claiming that the arrestee's name is Abdol Rasul Dori Esfahani, a member of the Iranian nuclear negotiation team. According to the article, Dori Esfahani was in charge of banking affairs during the nuclear talks and was arrested for selling economic information to foreign countries.

A January article in the Financial Tribune referred to him as the “financial and banking representative in Iran’s nuclear delegation.” Immediately after Nasim published its article, Iranian social media networks were flooded with pictures of Dori Esfahani at the nuclear negotiations between Iran and the five permanent members of the UN Security Council plus Germany.

Adding a twist to the story, on Aug. 24, Bank-e Mardom published an interview with Dori Esfahani in which he claimed he was not arrested. “I’m speaking to you now from the Central Bank and I have not been arrested,” he said. “All of my efforts during my life have been to serve Iran and promote my country and it will remain so.” Dori Esfahani said the reports of his arrest “are completely false," adding, "I do not know why and with what goal they are doing this.”

The interview was quickly deleted without explanation. Nasim Online published a second story claiming that Dori Esfahani had been out on bail when he conducted the interview with Bank-e Mardom.

In its original article, Nasim reported that rumors about the arrest of a member of the nuclear negotiation team had been circulating on social media for days. According to Nasim, Dori Esfahani had used his access to financial institutions in Iran to pass information to American and British officials, for which he allegedly received 7,500 British pounds ($10,000) a month. He also was alleged to have been linked to the exorbitant salaries scandal in Iran.

After the publication of the first Nasim article, various Iranian meida outlets cited a source at the Foreign Ministry as denying any individual involved with the implementation of the nuclear deal had been arrested. Sayed Yaser Jebraili, a researcher and analyst for Fars News, responded to the Foreign Ministry denial on his Telegram account, stating that while it was true that no member of the implementation team of the nuclear deal had arrested, it was true that Dori Esfahani, who was a negotiator in charge of banking affairs, had been arrested for spying. Jebraili was the first journalist to confirm Dori Esfahani’s arrest.

Interestingly, neither Tasnim News Agency nor Fars News have reported on the arrest.

Conservative Iranian parliamentarian Javad Karimi-Ghodousi went one step further and implied that Dori Esfahani was still traveling with Foreign Minister Mohammad Javad Zarif. According to Karimi-Ghodousi, Dori Esfahani had accompanied the Iranian delegation to Turkey recently, but a warrant for his arrest kept him from disembarking from the airplane in Turkey and he returned to Iran.

Karimi-Ghodousi referred to Dori Esfahani as a “spy" and added that in addition to receiving payment from the Central Bank of Iran and Saman Bank for serving on their boards, Dori Esfahani was receiving money from the United States and the United Kingdom as well.

Bahram Ghassemi, spokesman for Iran’s Foreign Ministry, denied that Dori Esfahani had been on the flight to Turkey with the foreign minister. Ghassemi said the reasons for Karimi-Ghodousi’s “baseless claims" are "completely clear” and said that the Foreign Ministry was not going to “sacrifice national and security interests” for the sake of partisan or personal goals. Whether or not the reports about Dori Esfahani are true, Ghassemi may be on to something in suggesting that those behind the accusations are conservatives who oppose the nuclear deal.