Some parliament members claim that Iran has already accepted inspections at its military sites, despite denials by Iran's nuclear negotiators. 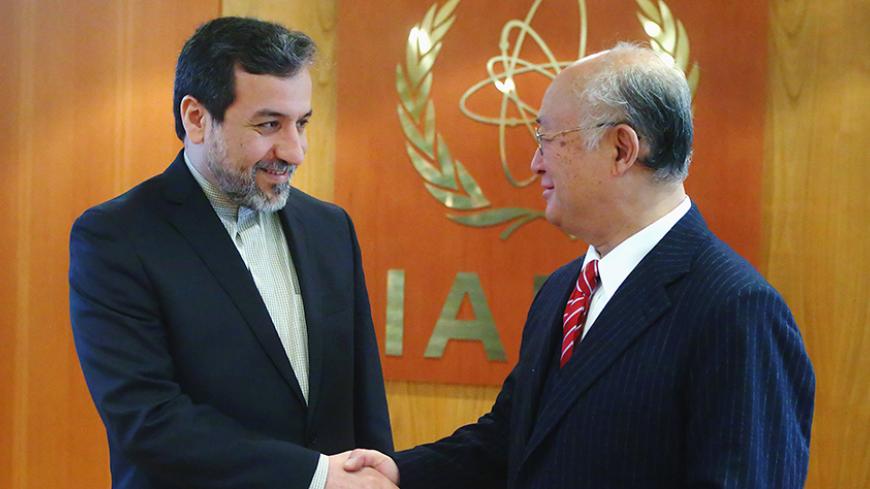 Iranian parliament members who attended a closed-door session with Iranian negotiators say Iran has accepted “managed inspections” of military sites. While the negotiators have denied it, some Iranian media commentators remain unconvinced.

Javad Karimi-Ghodousi, a member of parliament’s influential National Security and Foreign Policy Committee, told Fars News Agency on May 24 that Iranian nuclear negotiator and Deputy Foreign Minister Seyyed Abbas Araghchi said, “Inspections of military sites within the Additional Protocols has been accepted, but these inspections will be managed and this management will be conducted with seriousness.” Iranian negotiators often update members of the committee on the latest rounds of nuclear negotiations between Iran and the five permanent members of the UN Security Council plus Germany (P5+1).

According to Karimi-Ghodousi, Araghchi also said that the P5+1 presented a list of names of Iranian nuclear scientists that they wanted to speak with. However, Araghchi reportedly denied the request, saying that as far as “access to our nuclear scientists, even if the names of scientists were given to us by the opposing side, we did not agree for them to have access to our scientists.” Karimi-Ghodousi is the parliament member who circulated a bill to suspend the nuclear negotiations over military threats by US officials. The bill was widely panned after a number of parliament members said they were misled into signing it.

A number of other Iranian parliament members also said that Araghchi made similar comments, forcing Iran’s Foreign Ministry — which is responsible for the nuclear negotiations — to release a statement May 24 regarding reports about Iran having accepted inspections at nuclear sites. The statement read, “At the closed-door session, [Foreign Minister] Mohammad Javad Zarif and I emphasized our opposition to inspections or visits of any military site or interviews with nuclear scientists, and explained that during the entirety of the negotiations essentially any path to abuse has been closed.”

The statement continued, “The procedures for work within the Additional Protocols for managed access to nuclear sites was described,” going on to add that comments attributed to him about the inspections of military sites were “incorrect.”

Despite Araghchi’s statement, other parliament members who are supportive of the nuclear negotiations have also confirmed Karimi-Ghodousi’s statement about inspections. Iranian parliament member Behrouz Nemati told the Islamic Republic News Agency, which operates under the Hassan Rouhani administration, that “Araghchi explained that the inspections are within the framework of the Additional Protocols, and it will not be in a way that the US will be able to inspect any place they want at any time. The inspections will certainly be managed.”

The issue of inspections is a sensitive one for Iran. Ayatollah Ali Khamenei, Iran’s supreme leader who has final say on the nuclear program, rejected any inspections of military sites or interviews with Iran’s nuclear scientists during a speech May 20. However, Khamenei’s speech was much more focused on rejecting US requests to “interrogate” Iran’s scientists, as he put it. Therefore, it seems that there is a gray area and perhaps misunderstandings when it comes to inspections of military sites, but a clear red line when it comes to interviewing Iran’s nuclear scientists.