A bill calling for the suspension of nuclear talks until US officials cease to make threats against Iran has faced a backlash after some members of parliament claim they were misled about the bill. 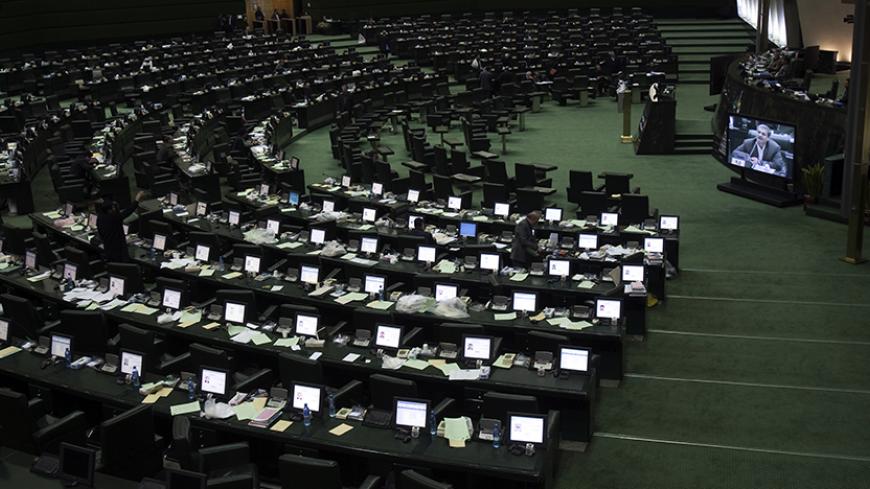 Parliament member Mostafa Kavakebian is seen on a screen as he speaks at the parliament in Tehran, Dec. 11, 2011. - REUTERS/Morteza Nikoubazl

A bill demanding that Iran suspend nuclear talks with the United States until US officials cease making military threats against Iran was presented to the Iranian parliament May 12. The bill has faced a backlash, however, with some members of parliament claiming that they were misled about the nature and content of the bill.

Javad Karimi-Ghodousi, a member of parliament from Mashhad and member of the hard-line Endurance Front, presented the bill to parliament’s board of directors. The bill, which received 80 signatures, was presented as a “triple-emergency bill,” requiring a representative from the Guardian Council to be present to give a response within 24 hours. Triple-emergency bills are typically presented when the country is actively under military attack. Mehdi Koochakzadeh, Hamid Rasaei, Esmail Kowsari and Morteza Agha-Tehrani, who signed the bill, have been some of the most vocal critics in parliament against the nuclear talks and the Iranian negotiation team.

One of the key parts of the bill states, “The administration, foreign policy officials and members of the negotiating team must suspend negotiations with the Americans on the nuclear issue until the US officials officially and openly put aside threats against the Iranian nation.” The bill also read that Iran must continue the nuclear talks with the other members of the five permanent members of the UN Security Council plus Germany (P5+1) “without the presence of the Americans.” This point is rather odd given that some of the most intensive and fruitful meetings during the nuclear negotiations have been bilateral talks between Iranian and US officials.

Other members of parliament whose names appear on the bill claim, however, that they were misled that the bill would be a triple-emergency bill and others thought they were signing a bill that expressed support for the nuclear negotiation team.

Seyyed Mohammad-Hossein Mir Mohammadi, who signed the bill, told Iran parliament’s news agency Icana, “A large number of the representatives signed a bill to support the nuclear negotiation team and to confront threats from Western nations. But in the end, we saw that the creators of the bill presented to the board of directors a triple-emergency bill to suspend the talks, whereas on the top of the bill that was signed, there was no mention of it being a triple-emergency bill.”

Mir Mohammadi said he was under the impression that the bill would be presented only at the discretion of the nuclear negotiators who could promote it if they felt that Western threats continued. He added that making this a triple-emergency bill “has no legal or logical basis.”

Mohsen Biglari, who also signed the bill, told Icana that the bill that was signed was not a triple-emergency bill and that the text stipulated only that “America does not have a right to make threats against Iran in the nuclear negotiations.” He said, “The majority who signed the bill have protested against the actions of the creators of the bill," adding, “I completely support the nuclear negotiations and its continuation.”

Mohammad Hossein Farhangi, a member of parliament’s board of directors, said, “A number of members of parliament filed a written warning” against Karimi-Ghodousi, who gathered the signatures for the bill.