While most officials and media in Iran have been supportive of the framework deal, some have expressed opposition. 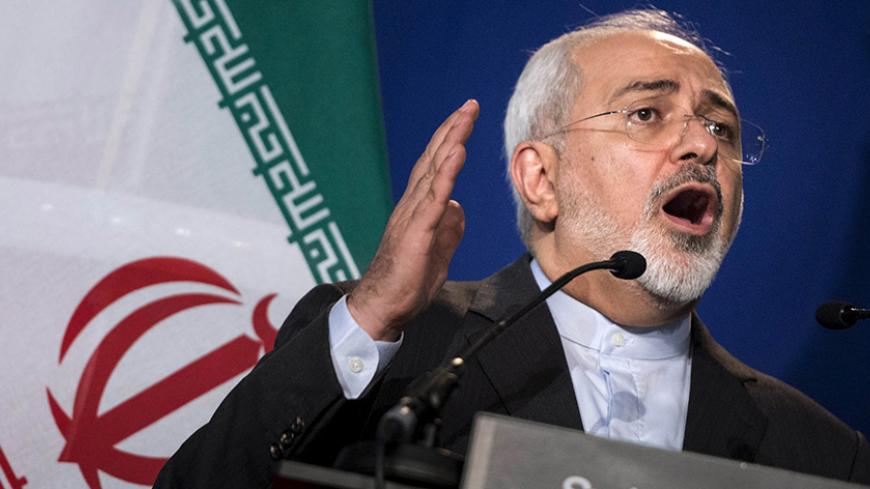 Iranian Foreign Minister Javad Zarif gestures as he speaks during a news conference at the Swiss Federal Institute of Technology in Lausanne, April 2, 2015. - REUTERS/Brendan Smialowski

After Iran and the six world powers announced a framework that would drastically reduce Iran’s nuclear program, negotiators arrived home from the marathon talks in Lausanne, Switzerland, and immediately began selling the deal to their domestic critics. Iranian Foreign Minister Mohammad Javad Zarif gave a two-hour interview with state TV to defend the deal. The stiffest opposition so far has come from parliament.

According to a number of Iranian websites, Zarif’s address to parliament’s National Security and Foreign Policy Committee about the nuclear talks and the framework deal turned into an “unprecedented” argument between Zarif and conservative parliament member Javad Karimi-Ghodousi.

Karimi-Ghodousi said that the supreme leader, Ayatollah Ali Khamenei, had warned Zarif about deals regarding nuclear enrichment plants Fordow and Natanz. According to the Joint Comprehensive Plan of Action, Iran will not enrich at Fordow and use it as a research center.

Zarif denied that Khamenei had ever “warned” him, and that Karimi-Ghoudousi “was lying” and was not present at the meeting he was talking about. According to witnesses, the argument in the session became so intense that security officers kicked out the reporters.

Karimi-Ghodousi is considered one of the more hard-line politicians in Iran. A supporter of former President Mahmoud Ahmadinejad, he is one of the most vocal critics of President Hassan Rouhani’s nuclear policies. Though Karimi-Ghodousi is not alone in his criticism of the framework deal. A number of hard-line media outlets aligned with Ahmadinejad and former nuclear negotiator Saeed Jalili have expressed doubts about the framework.

Hossein Shariatmadari, editor of Kayhan newspaper, rather dramatically said, “We gave a saddled horse and received a torn bridle.” (The Kayhan editor is chosen by the supreme leader.)

Analyst Mehdi Mohammadi wrote in Vatan-e Emrooz that there was an “imbalance” in what Iran gave and what it received in return. He called the Lausanne agreement “the most important event” in the history of Iran’s nuclear program. This was a startling claim given that in a 2004 Paris agreement with France, Germany and the United Kingdom, Iran suspended all enrichment.

Mohammadi said there are two major issues with the Lausanne framework deal. One, the Iranian negotiation team created international commitments that Iran is bound by. According to Mohammadi, they did not have permission to do this. He dismissed Zarif’s comments that the framework deal was not necessarily binding and asked if it were not so, would Iran be allowed to add more centrifuges to the 5,000 centrifuges it agreed to in Lausanne. If not, then it was binding.

The second issue with the framework deal, Mohammadi said, was that it was a written framework, which makes this a multistep deal, something the supreme leader was opposed to.

Despite the conservative criticism, most Iranian newspapers and websites were happy about the announcement of the framework and most officials expressed support. Hassan Firouzabadi, the head of Iran’s Armed Forces, personally thanked Rouhani and Zarif for the deal. Hamid Reza Moghadam-Far, media adviser for the Islamic Revolutionary Guard Corps, said that the Lausanne statement merits neither excitement nor opposition but did say some concerns need to be addressed. Ayatollah Khamenei, who has final say about the nuclear program, has not issued any statements, though Zarif has said numerous times that Khamenei has been informed of every step of the nuclear negotiations.

Iran and the P5+1 have until June 30 to finalize the details of the framework announced in Lausanne.