Iran's nuclear negotiators are coming under more criticism and some believe that the supreme leader will soon take a hard line on the talks. 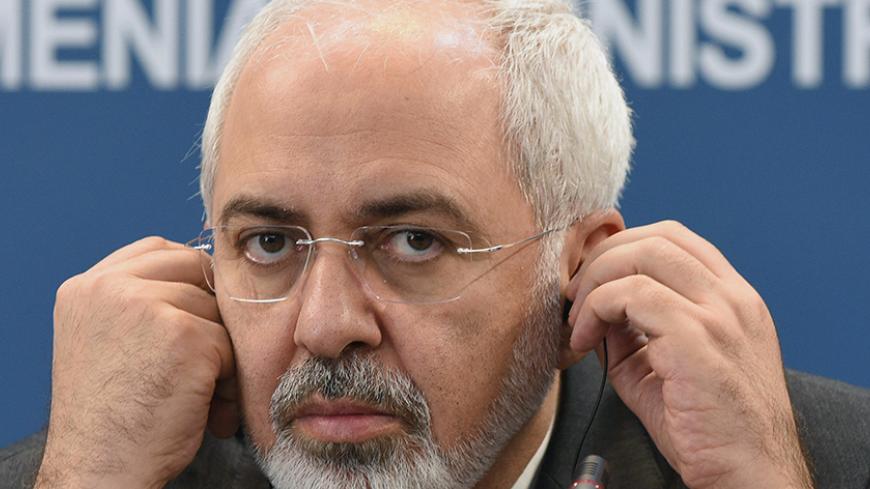 A correspondent in Tehran
February 3, 2015

There are murmurs in Tehran that the pressure on the moderate nuclear negotiation team is rising. A hard-line figure has admitted in an interview with Al-Monitor on condition of anonymity that his like-minded friends have made a string of targeted attacks against foreign minister and chief nuclear negotiator Mohammad Javad Zarif and his team.

The figure, a graduate of Imam Sadeq University, which specializes in training future managers of the Islamic establishment, told Al-Monitor that he had said in a private meeting with other hard-liners that "they are stepping up pressure” over concerns that Americans are wasting time in the negotiations.

Pressure on Zarif is nothing new, but it intensified after the veteran diplomat went for a stroll Jan. 14 with US Secretary of State John Kerry during intense nuclear negotiations in Geneva, aimed at reaching a settlement of the 12-year nuclear dispute.

The moderate minister is now accused at home of "too much" compromise and ignoring the "ideals of the Islamic revolution" during his talks with the the five permanent members of the UN Security Council plus Germany.

“Iran has nothing more to offer in the talks. This is America’s turn to take a real step forward,” an anonymous source who was also present at the meeting quoted the hard-line figure as saying.

After a months-long hiatus, attacks on the administration's foreign policy have also been revived in Friday prayers, which function as powerful conservative-leaning platforms spread throughout the country. Hojat al-Islam Kazem Sedighi, a hard-line cleric, said on Jan. 23 during Tehran Friday prayers that the stroll in Geneva was "against the dignity of the Islamic Republic's diplomacy."

Parliamentarians also reacted to the issue, with 21 of them signing a petition to call on the foreign minister to provide an explanation over his 15-minute promenade with Kerry. It read, "Your exhibitionist walk together with [Kerry] along Geneva sidewalks was certainly outside the norms of diplomacy, so why don't you put a stop to such behavior?"

Parliament's hard-liners appear to have an excuse now to sabotage the talks, which have so far resulted in an unprecedented interim agreement reached in November 2013 but extending the final deadline twice — in July and in November 2014 — in an effort to hammer out a permanent deal, which could limit Tehran's nuclear program in exchange for the lifting of economic sanctions.

The call for an explanation might be seen as a move in line with the main strategy of the conservative-driven parliament to make more troubles for the rival group, but it could pursue other objectives, too.

President Hassan Rouhani already made conservatives angry when he threatened last month to hold a referendum over "crucial disputed matters," in a clear reference to the nuclear dispute with the West.

"Our ideals are not bound to centrifuges. Our ideals are bound to our hearts, brains and determination,” Rouhani said, warning his critics. During an important economic conference in Tehran, he added, "By God, by Lord, it is impossible: The country cannot have sustained growth when isolated," he added, implying that the “resistance economy” doctrine, as described by conservatives, cannot be implemented in isolation.

Rouhani's opponents in the parliament, along with other conservative entities, seem to have taken the referendum threat seriously. They will not waste their time by sitting back and waiting for the popular president to put the nuclear issue to a vote, as they are sure what such a move could bring. They appear to have found the time right to overturn Rouhani’s central campaign pledge — that is, the immediate lifting of all economic sanctions.

Any long-term deal with the West, namely the United States, if reached by a self-imposed deadline of June 30, could be another nail in the hard-liners' coffin. Conservatives have been constantly yelling in the last 18 months that the negotiations would fail, apparently in an orchestrated effort to echo the supreme leader's prediction.

Though Ayatollah Ali Khamenei has on several public occasions voiced support for the negotiation team, many still believe that his stance toward direct talks with the United States is different in private meetings.

On Jan. 17, Javad Karimi Ghodousi, a hard-line parliamentarian and a staunch supporter of Khamenei, said in a speech in Mashhad that the supreme leader is the “biggest critic” of the nuclear talks.

Tehran does not accept binding limits on its nuclear technology, as the United States has demanded. As a result, Kerry is “less optimistic” now to reach a “permanent” deal with Iran, a reality the Iranian leader is well aware of. On the other hand, Ayatollah Khamenei and the political groups loyal to him believe that they have made too many concessions to Washington and are not going to continue with the same policy. So, the immediate lifting of sanctions seems to be out of reach. But neither would they be happy with a gradual easing of sanctions, because in that case, $130 billion in Iranian foreign assets will remain blocked, keeping the already troubled economy away from a major financial source.

So far, Khamenei, who has the final say in Iran’s foreign affairs, has been silent on Zarif's controversial stroll — other than his website, which published a cropped picture of the walk, with a quote saying that Iran should focus on “real points for progress and welfare” under the headline “Imaginary Points.” His silence could be that before a major storm. Some conservatives believe he might be waiting for a development in the talks to react.

When asked why Khamenei does not personally react if he is really disappointed with Zarif’s performance or the slow pace of talks, the source, who has close ties with the leader’s office said, “He will.”