Secretary of State John Kerry will meet Iran Foreign Minister Zarif in Geneva Jan. 14, ahead of a new round of nuclear talks. 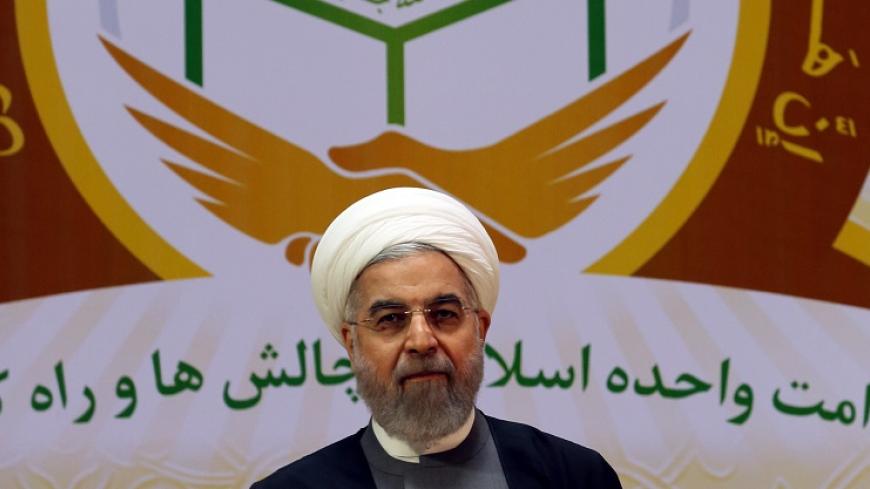 US Secretary of State John Kerry will meet Iran’s Foreign Minister Mohammad Javad Zarif in Geneva Jan. 14, ahead of a new round of US-Iran talks next week, as the parties try to break a deadlock to reach a final nuclear accord that has so far eluded them after more than a year of negotiations.

But a former US nuclear negotiator warns that continued internal disagreements in Iran seem to be stalling progress on a deal.

“In my view, the talks have become hostage to internal divisions in Tehran,” Robert Einhorn, former top arms control adviser on the US Iran nuclear negotiating team, told Al-Monitor in an interview Jan. 9.

“Progress in the negotiations will require a decision in Tehran to make adjustments in Iran’s negotiating position,” Einhorn, now with the Brookings Institution, said. “It means the supreme leader has got to … authorize [his negotiating team] to make the adjustments that are necessary to conclude a deal. And he has not done that yet.”

Kerry and Zarif will have a “bilateral meeting to provide guidance to their negotiating teams before their next round of discussions,” State Department spokeswoman Jen Psaki said in a statement Jan. 9.

US and Iran negotiating teams will then hold bilateral nuclear talks Jan. 15-17, followed by a meeting of political directors from Iran and the P5+1 — the five permanent UN Security Council members plus Germany — on Jan. 18, all in Geneva.

Negotiations are intensifying as Iran and six world powers aim to reach political agreement or a final nuclear deal by March, though they have given themselves until June 30 to finalize technical details on a possible final accord.

But former US negotiator Einhorn said the breakthrough needed for a final deal has not happened yet and attributed it to sharp political divisions in Iran between Iranian President Hassan Rouhani, seeking a compromise, and his hard-line critics.

“I think these sharp disagreements within Iran are impeding the negotiations,” Einhorn said. “And I think as a result, Iranian negotiators have been kept on a short leash. They don’t seem to have been authorized the necessary flexibility to reach a compromise settlement.”

While Rouhan gave a bold speech Jan. 4 saying Iran needs to engage with the world to develop its economy and that the nation's ideals were not tied to its centrifuges, Iran's Supreme Leader Ayatollah Ali Khamenei on Jan. 7 said the United States cannot be trusted.

"The Americans are impudently saying that even if Iran backs down on the nuclear issue, all the sanctions will not be lifted at once," Khamenei said in remarks reportedly broadcast on Iranian State TV. "It shows that this enemy cannot be trusted."

Diplomats have previously said there had been some progress at talks in November 2014 in coming up with ideas to narrow gaps on the issue of Iran’s enrichment capacity in a final deal, though they said that gaps on that and other issues still remained.

“I think the Iranian negotiators have been playing around with a number of concepts designed to show flexibility,” Einhorn said. “But which don’t really convey a willingness to accept the kind of reductions in enrichment capacity that could provide the basis for agreement.”

Iran has also sought faster sanctions relief in a final deal, while Iranian officials have expressed some doubt whether President Obama would have the political capacity to get a Republican-controlled Congress to eventually lift nuclear related sanctions in exchange for permanent curbs Iran would make to its nuclear program.

In an effort to reach a breakthrough, the United States and Iran have reactivated direct, one-on-one talks since the failure to finalize a nuclear accord by the original Nov. 24 deadline. That is in contrast to the three-way, US-Iran-EU format they used last fall, when insufficient progress was made.

Sources told Al-Monitor that at the last meeting of US Iran negotiators in Geneva in December, the parties had written down what was discussed, as well as the gaps that still needed to be resolved to reach an accord. On Jan. 9, US and Iranian officials said that Kerry and Zarif will meet to give guidance to their negotiating teams ahead of the new round of US-Iran bilateral talks.

Kerry will also make a stopover in Munich Jan. 10 to meet with the Sultan of Oman, who played a key role in hosting secret bilateral talks between the United States and Iran in 2013, and is receiving medical treatment there. Kerry will “meet with Sultan Qaboos of Oman to express his gratitude for their long-standing and strong relationship,” Psaki said, adding she expects it to be “more of a personal meeting than a policy meeting.”

Meantime, Kerry on Jan. 9 swore in Antony Blinken as deputy secretary of state, succeeding Bill Burns. The White House also announced Jan. 9 that Obama has nominated Treasury Undersecretary David Cohen to be the next deputy director of the CIA.