Israeli Prime Minister Benjamin Netanyahu has been redoubling his efforts to squash the new public broadcasting corporation before it is even born in his quest to control the media. 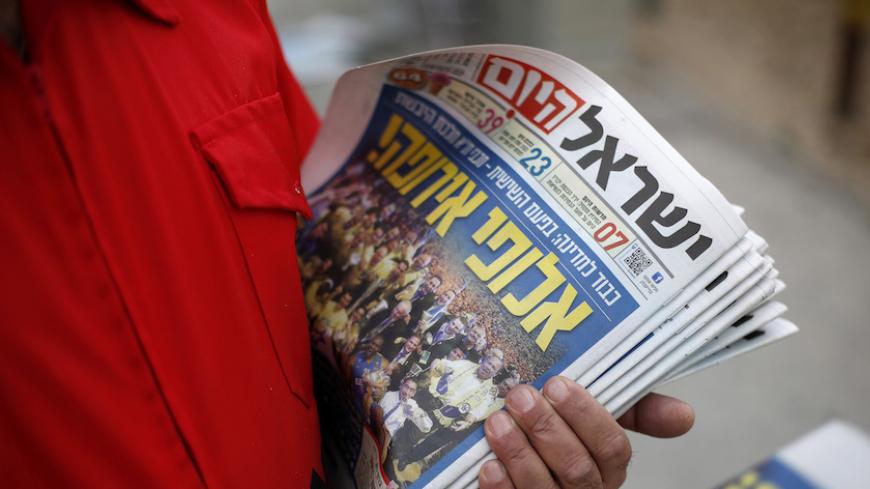 An Israeli worker for the daily newspaper Israel Hayom holds copies of the newspaper as he distributes them to drivers of passing vehicles and pedestrians in Jerusalem, May 19, 2014. - REUTERS/Baz Ratner

In the course of his intensive coalition negotiations with Zionist Camp leader Isaac Herzog for the establishment of a unity government, Prime Minister Benjamin Netanyahu was asked to transfer the communications portfolio to Herzog’s party. “Forget about it,” said Netanyahu, according to a political source who spoke on condition of anonymity. “I’d give you the premiership before the Communications Ministry.”

In the last seven years, Netanyahu has inched closer to autocratic rule than any other Israeli leader. He fortified his rulership and has consolidated several key government ministries under his wing. In addition to the premiership, Netanyahu also serves as foreign minister, communications minister, economy minister and regional development minister, in addition to other functions. Though the Communications Ministry is seen as an underfunded and small ministry, Netanyahu has no intentions of ever relinquishing it.

The struggle for a free, independent press in Israel intensified in recent weeks after Netanyahu and his people stopped even trying to whitewash their efforts to bring about the closure of the new public broadcasting corporation before it even sees the light of day. The kinds of statements uttered in the July 31 meeting regarding the establishment of a corporation that is supposed to be independent and separate from the political system had never been heard before in Israeli politics.

Culture Minister Miri Regev did not hide the Likud's aspiration to control the corporation. “It’s inconceivable that we’ll establish a corporation that we won’t control. What’s the point?” she asked. “We put down the money and they broadcast whatever they want?” Minister of Internal Security Gilad Erdan, who initiated the establishment of the corporation about two years ago, tried to give Regev a lesson in democracy. But he seemed to be talking to a wall. Additional ministers attacked the establishment of the corporation and argued that there were not enough Likud supporters among the journalists in the corporation’s ranks. Others claimed that Naftali Bennett, the head of Orthodox Zionist HaBayit HaYehudi, has control over some of the journalists since they are “skullcap wearers” (Orthodox Jews). At this stage, Justice Minister Ayelet Shaked, a member of Bennett’s party, lost her cool. She banged on the table and blasted the Likud ministers, saying, “Stop it already with your lies! Learn to control [yourselves] and stop complaining. … You have your own newspaper, what are you whining about?”

The tumult surrounding Israeli public broadcasting reached new heights with Netanyahu’s efforts to wrest control over the independent Israeli media, to weaken it, whittle away its power and subordinate it to his authority. After he lost power and was deposed from the premiership in 1999, Netanyahu told his associates that he’d learned his lesson. When he’d return to power, he vowed, he would bring “his own media” with him. According to Netanyahu, he lost power because the left-leaning Israeli media, the legal system and the “elites” all ganged up against him in his first term of office. He swore that he wouldn’t let it happen again. For this reason, he holds onto the communications portfolio and appointed Shlomo Filber the ministry’s director general. Filber, Netanyahu’s most faithful and intimate associate, has been viewed as Netanyahu’s right-hand man over the last 20 years.

The first stage in Netanyahu’s efforts to weaken media criticism was the founding of the newspaper Israel Hayom. This newspaper, which is strongly biased in Netanyahu’s favor, is funded by Jewish-American casino magnate Sheldon Adelson, Netanyahu’s great patron and supporter. The operation of the paper, which is distributed daily with a circulation in the hundreds of thousands all over the country for free, costs hundreds of millions of shekels a year. This freebie newspaper flooded the country and weakened Yedioth Ahronoth, Netanyahu’s biggest nemesis, owned by veteran Israeli publisher Arnon Mozes. In recent years, Israel Hayom has become Israel’s most widely circulated newspaper, replacing Yedioth at the very top.

Netanyahu also tightly regulates commercial television stations. He hopes to split the Channel 2 news powerhouse into two separate channels, which would drastically weaken it. Simultaneously, Netanyahu wants to open television to free competition, which would allow wealthy figures to create new stations, even though he clearly knows that the Israeli advertising market is not big enough to support another channel. Netanyahu has a stockpile of tycoons who are ready to invest and prepared to lose money to help him take over the media. Meanwhile, the owners of the current stations are sick and tired of losing enormous sums every year.

The struggle surrounding the public broadcasting corporation has now brought to light, for the first time, the intensity and dirty tactics of the current all-out war. It demonstrates the utter lack of shame on the part of politicians, mainly Likud ministers, who gobble up the crumbs that Netanyahu distributes so stingily. This week, Netanyahu reshuffled Cabinet portfolios. Some of the ministers he promoted paid him back by forcefully and publicly attacking the nascent Israeli public broadcasting corporation.

The corporation was created by a special law legislated by the Knesset in its previous term after the Israel Broadcasting Authority was declared bankrupt. The old authority also suffered from degeneration and irrelevance. By law, the authority should be closed down and a new broadcasting authority should replace it. Despite pressures from Netanyahu, the initiators of the law somehow managed to create a relatively independent corporation, well shielded from the political system. The corporation was supposed to have begun broadcasting this coming October, but Netanyahu understood that control over the new broadcasting entity would have been wrested from him.

In recent weeks, the prime minister made efforts to postpone the launching of the new corporation as long as possible so as to irreversibly damage it, and nip it in the bud. These efforts were halted by Finance Minister Moshe Kahlon, who is supposed to underwrite the process.

In a government meeting on July 31, Netanyahu publicly and blatantly plowed through all Kahlon's red lines. His associates bluntly stated that they want control over the public broadcasting corporation.

This week, the fight over public broadcasting became a symbolic battle between all the political sides. But mainly it is the struggle of the remnants of Israel’s free media for its freedom, independence and chances for survival.