Can battle over public broadcasting bring down Netanyahu?

Prime Minister Benjamin Netanyahu is now fighting against the establishment of a new public broadcasting corporation, an entity he himself initiated. 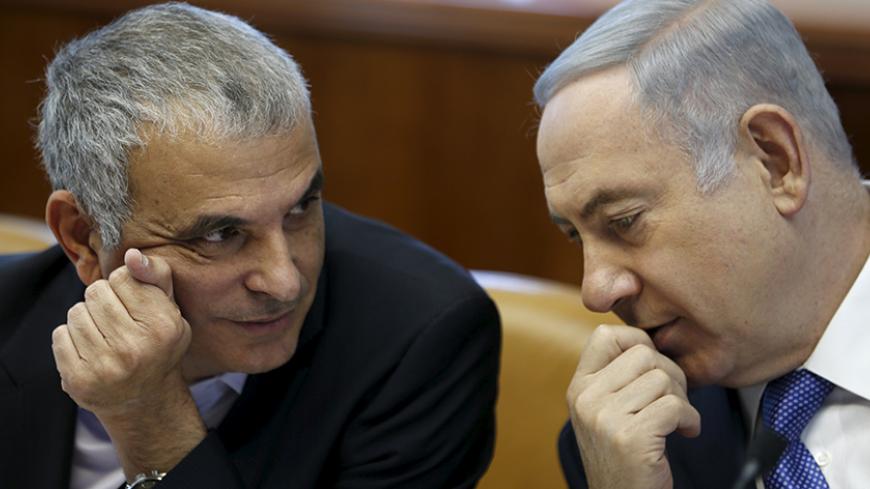 No one ever imagined that Prime Minister Benjamin Netanyahu’s irrepressible obsession with everything to do with communications and the media in Israel would lead to a coalition crisis that threatens the very survival of the government. Yet that is exactly the situation as this article is being written Nov. 2. There has been an almost absolute shutdown of communications between Netanyahu and his finance minister, Moshe Kahlon, with both men facing off against each other over an issue that has rocked the Israeli political system over the past few weeks. At the center of their conflict are Netanyahu’s plans to shut down the public broadcasting corporation, which was created by a special law passed by Netanyahu’s own government just a year ago.

The corporation was supposed to replace the old Israel Broadcasting Authority (IBA), which will shut down once the corporation begins operation in early January 2017. It took about two years before the legislation bearing the new corporation’s name was finally passed into law. It was supposed to bring Israel into the 21st century in all matters concerning a public broadcasting platform, which would be completely independent and free of political influence. Then, something happened to Netanyahu a few months ago. No one can explain exactly what it was, but suddenly the prime minister began to see the new corporation that he himself founded as a kind of strategic threat to his government.

Netanyahu lashed out at the nascent corporation in an absolute frenzy, first through his inner circle of confidants — the most prominent of whom was the coalition chairman, Knesset member David Bitan. Then, Netanyahu himself came out of his closet by announcing that he planned to submit his own law to the government to cancel the creation of the new public broadcasting corporation, and that he would do it as early as Nov. 6.

The only person who can stop him now is Kahlon, a former member of the Likud Party and now the leader of Kulanu, which holds 10 seats in the Knesset. Netanyahu is bandying about a coalition agreement signed by all the factions, in which they commit themselves to cooperating with all of the media and communications reforms submitted by the minister of communication. It should be remembered that Netanyahu holds the Communications Ministry portfolio.

In response, Kahlon is holding up another coalition agreement, which allows him to veto any decision that would cost the state over 10 million shekels ($2.6 million).

The surprising reversal on the public broadcasting corporation, which would stop the new corporation's creation in its tracks and resuscitate the old IBA, is expected to cost the state 370 million shekels a year ($96 million) for 10 years. Kahlon is unwilling to be a part of that.

On the afternoon of Nov. 2, Netanyahu blinked first. Giving in to Kahlon, Netanyahu decided to postpone the presentation of the law proposal on dismantling the broadcasting corporation for government approval. Instead, he agreed with Kahlon that a joint committee for the Communications Ministry and the Treasury will examine the issue and present its recommendations within three weeks.

Ostensibly, this is an economic issue. The essence of the disagreement, however, and the public outcry over the issue is much deeper. It is a struggle over a free and independent press, public broadcasting free of external control and the continuation of Netanyahu’s aggressive seizure of the Israeli media market. As of now, the only person standing between Netanyahu and control of public broadcasting in Israel is Kahlon.

Netanyahu’s obsession with everything to do with the Israeli media was described in an earlier article right here in Al-Monitor. The article explains that Netanyahu attributes his removal from power after his first term in 1999 to the media’s hostility and to what he calls the “fact” that the media acts in the service of the Israeli left. Netanyahu swore that when he returned to power, he would be in control of his own media platform, and he kept his promise. He now has his own free daily newspaper with the greatest circulation in Israel (Israel Today), he holds the Communications Ministry portfolio and he has disproportionate influence or some form of control over many other media outlets.

But that is not enough for Netanyahu. Just a few months ago, he was suddenly struck by new insight. The new public broadcasting corporation, which was created following an important reform spearheaded by his confidant, Public Security Minister Gilad Erdan, suddenly seemed like a threat. Once Netanyahu received information that several people close to his despised nemesis Arnon Mozes, publisher of the daily Yedioth Ahronoth, allegedly hold sway over the new corporation, he was jolted out of his sense of tranquility. So he made a hair-raising U-turn, slammed on the brakes and tried to repeal the law that he himself passed. The old Broadcasting Authority, which over the last few years had become a mouthpiece for the government, would then be rebuilt from the ruins.

Standing up to Netanyahu are the few independent voices of the Israeli media and political opposition. Yet none of them is able to dissuade Netanyahu from going through with his plans. The only person who can do that is Kahlon. As of now, the fate of public broadcasting in Israel rests on the finance minister’s shoulders.

Kahlon knows this is a hollow threat. The last time Netanyahu dissolved the Knesset and went to elections in December 2014, he was intent on blocking a law against the newspaper Israel Today, which had just passed its initial reading in the Knesset. Israel Today is a free daily paper, funded by billionaire Sheldon Adelson and considered to be his personal mouthpiece. The move did, in fact, put an end to the law. By dissolving the Knesset, the legislative process was terminated.

In the case of the public broadcasting corporation, however, the situation is the reverse. The law has already been approved and passed, and it is now being implemented. If Netanyahu plunges the Knesset into a new round of elections, he will effectively be ensuring that the new corporation is established. No one can ensure that Netanyahu will return to the Knesset with 30 seats — as was the case in the 2015 elections — nor can anyone even guarantee that he will win the election again. That is the core of the complex dilemma faced by the prime minister.

The one person standing up to him over this is a lone politician who has his own doubts. The purpose of Kahlon’s whole life is to reduce housing costs in Israel, and he is currently in the midst of an intense campaign to achieve that. Breaking up the coalition would put an abrupt end to his dream and place his political career at risk.

Both Kahlon and Netanyahu are intimately familiar with each other’s strengths and weaknesses. In other words, this will be an interesting duel.