Israeli Prime Minister Benjamin Netanyahu, worried that a new independent broadcasting corporation would veer left right under his nose, has postponed its launch by two years. 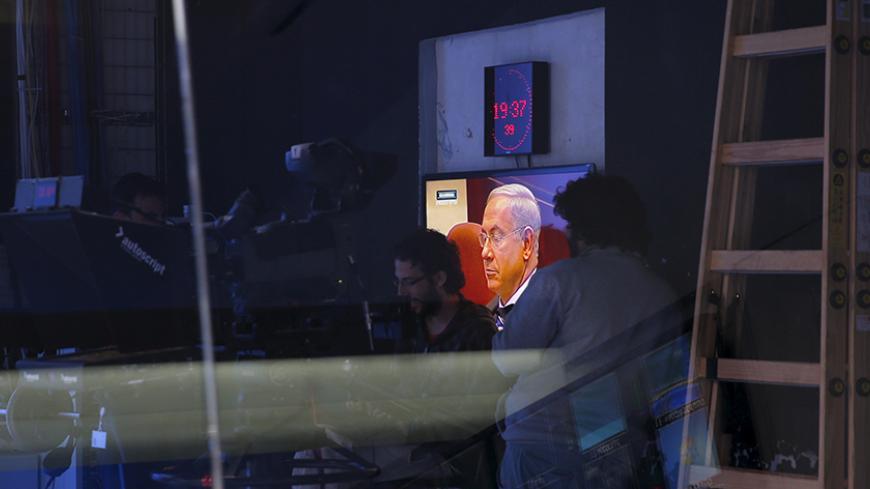 Israel's Prime Minister Benjamin Netanyahu is seen on a monitor before the evening news bulletin on Channel 10 in Jerusalem, Nov. 18, 2015. - REUTERS/Ronen Zvulun

Preparations to shut down the Israel Broadcasting Authority, the state's broadcasting network, and replace it with a new public broadcasting corporation have been stepped up over the past few weeks.

The new corporation was scheduled to begin operations on Oct. 1. As a result of the reform of the Israel Broadcasting Authority and legislation for that express purpose, it seemed Israel's collapsing public broadcasting was finally about to get some good news. To stick to the crowded timetable legislated by the Knesset, the nascent corporation worked around the clock, recruiting new journalists and editors who would be the basis of a powerful and relevant new news entity. Just about every day, news reports were filled with stories of contracts with top journalists, some of them from the Israel Broadcasting Authority and others who decided to leave various commercial media outlets for this new venture.

The corporation was convinced it would become the Israeli version of the BBC. It would emerge as an independent, high-quality public news channel, unfettered by commercial considerations. It would be a refreshing change after so many years treading water under wasteful and corrupt management and subject to the whims of politicians.

The bomb was dropped on the afternoon of July 18, just 2½ months before the new corporation’s launch. It all began with an insinuation by Prime Minister Benjamin Netanyahu, who also serves as minister of communications, from the Knesset podium. He said that the members of the corporation were not meeting the official timetable, “so we must discuss what to do about it.”

Netanyahu already knew that just a few hours later, the Histadrut Labor Union would announce that an agreement had been reached between its chairman, Avi Nisenkorn, and the director general of the Ministry of Communications, Shlomo Filber, that the launch of the new corporation would be postponed to 2018. All this happened even though the corporation was prepared to meet the deadlines set for it and no one had bothered to consult or inform its staff about this dramatic development.

This delay raises enormous questions about the future of public broadcasting in Israel. It now seems that as long as Netanyahu is prime minister and communications minister, public broadcasting will continue to be pummeled and eventually lose its relevance. It was apparently naive to believe that an independent broadcasting network would be established in Israel while Netanyahu is the country’s leader. The fact is that as soon as the first indications emerged that the new corporation was a professional organization whose directors had no commitment to the prime minister and his agenda, Netanyahu delivered it a deathblow.

Obviously, the corporation's tight deadline led to some mistakes in its formation. Some of the good people who work hard at the Israeli Broadcasting Authority were even not invited to an interview at the new corporation and were left feeling that no one cared about them. They, too, are condemned to another period of professional uncertainty.

It is now believed that Netanyahu was worried that an independent broadcasting corporation with leanings far too left for his tastes would be created right under his nose, and that as soon as it was launched, he would have no way to control it. One political source in the Likud told Al-Monitor on condition of anonymity, “Journalists considered to be aligned with the right who did not receive offers from the corporation found a way to warn Netanyahu about it. Once that happened, it was obvious that Netanyahu would not let that happen, regardless of whether what they told him was correct or not.”

Netanyahu cobbled together a secret deal with Histadrut's chairman and in a single stroke halted the journalism industry’s wild celebrations. What lies behind this questionable alliance? While it is obvious what Netanyahu gets out of it, how does Nisenkorn benefit?

New elections for the chairmanship of Histadrut are scheduled to be held in May 2017, and Nisenkorn is expected to run for another term. For that, he will certainly need the support of the large Broadcasting Authority labor union (a member union of Histadrut), an organization that was scheduled to be dismantled in about two months. Postponing the opening of the new corporation by two years is great news for the Broadcasting Authority’s employees, most of whom were slated to lose their jobs. With this deal, the Histadrut chairman effectively saved them from the unemployment line.

Another possibility being bandied about is that in the deal between Netanyahu and Nisenkorn, the prime minister committed to not picking a Likud candidate to run against the current Histadrut leader. Nisenkorn himself has denied these claims, insisting in interviews that his sole objective was to protect the workers.

Meanwhile, the political and media storm surrounding the blow to public broadcasting has yet to subside not only among the opposition, but even within the government. Among the rattled are Finance Minister Moshe Kahlon and Minister of Internal Security Gilad Erdan, who as the former communications minister spearheaded the reform of the Broadcasting Authority. Both ministers expressed their reservations about the current developments and complained that no one consulted them. Erdan has even said that he will try to convince Netanyahu to change his mind, though the chances of that happening are meager at best.

Education Minister Naftali Bennett was not quite as polite as Kahlon and Erdan. He took to Twitter to call the decision “rash” and “astounding,” noting, “A free media is the basis of democracy.”

Netanyahu is unmoved. While delaying the launch of the new corporation requires legislation, all parties in the coalition will have no choice but to toe the line and vote their support. Netanyahu made sure long ago that his coalition agreements would include a clause obligating his partners to support all his communications initiatives. In other words, the likelihood that one of his ministers would initiate a coalition crisis or threaten to leave the government is rather slim.

Netanyahu is moving ahead confidently in his efforts to solidify his control of the media. It is practically an obsession with him that seems related to his near-mystical belief in the power of the media to determine political fortunes.

From the moment he entered public life, Netanyahu regarded the media as an enemy, a representative of the leftist ruling elites. That is why he is so determined to break it. These efforts gained momentum after the last election, when Netanyahu felt at the pinnacle of his power. His unprecedented decision to keep the communications portfolio for himself was an indication of the direction he would take, such as splitting the Channel 2 news company into several entities and weakening Army Radio by assigning the Defense Ministry's director general to analyze its operations. This initiative, while led by Defense Minister Avigdor Liberman, receives full support and encouragement from Netanyahu.

Netanyahu has had his own newspaper (through his associate Sheldon Adelson) for over a decade now. Yisrael HaYom is his flagship and anchor. He also dominates the social networks, with almost 2 million followers on Facebook and 600,000 on Twitter. Nevertheless, Netanyahu still lives with the feeling that he is being persecuted by the “leftist media.”

In the case of the new corporation, it seems as though the only sin committed by the people putting it together was that they honestly and innocently wanted good journalism. For Netanyahu, that was like unleashing a demon.