Why Netanyahu's 'Asian option' is raising eyebrows in Israel

With a difficult relationship between Israeli Prime Minister Benjamin Netanyahu and US President Barack Obama as the backdrop, Netanyahu has invested obvious effort in getting closer to China and Russia. 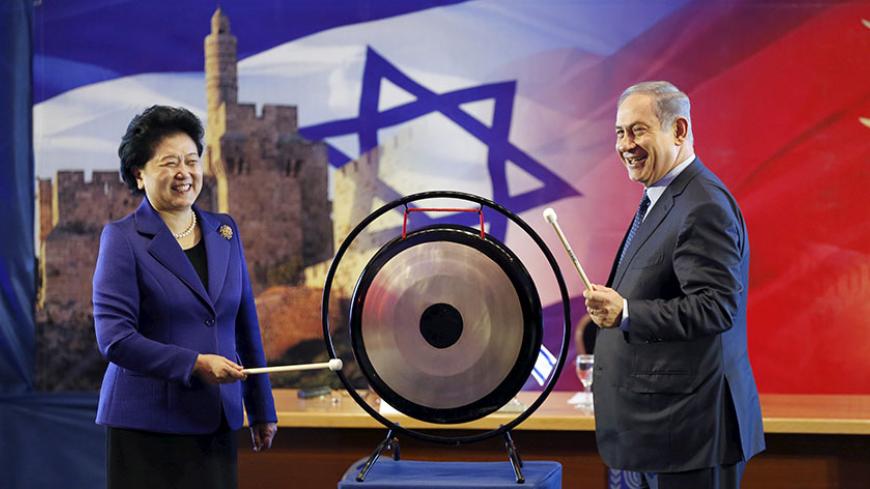 During one of Israeli Prime Minister Benjamin Netanyahu's frequent statements to the press in July, he offhandedly dismissed an assertion that he had spoken to Russian President Vladimir Putin a day earlier. A year or two ago, any conversation between the two men would have figured prominently in the news cycle. It would certainly have merited a separate story. In today’s world, however, it is not a story at all.

According to several Israeli sources familiar with the Israeli-Russian relationship, telephone calls between Netanyahu and Putin are now a matter of routine. Over the past few months, Netanyahu met with Putin face to face on three separate occasions, while he did not meet once with US President Barack Obama. He even turned down an invitation from Obama’s staff for a meeting in the United States. The question now is whether Netanyahu and Obama will meet in September at the United Nations General Assembly meeting in New York. While it is assumed that they will, given the terrible relationship between the two men, it is hard to bet on such a meeting taking place.

As Netanyahu drifts away from Obama at a rapid pace, he is drawing closer to Putin at an equally quick pace. That is not all. Israel’s relationship with China is also heating up with microwave-like speed. Over the past few years, Israel has invested considerable energy in an effort to upgrade its relationship with the Far East and Southeast Asia and with India, Korea and other countries.

Not everyone in Israel is happy about this. Does it come “at the expense” of Israel’s close relationship with the West, particularly with the United States and the European Union? Netanyahu’s staff swears that it does not. Even sources in the Foreign Ministry, which is dominated by Netanyahu, who holds the foreign affairs portfolio, told Al-Monitor that there is no reason to anticipate that such a move would harm Israel's strategic relationship with its Western allies.

Still, not everyone is convinced. Former Mossad chief Ephraim Halevy has already written several articles on the subject, including a detailed professional opinion opposing the exaggerated pace of Israel’s growing relationship with China. In it, Halevy mentions China’s acquisition of the Israeli food concern Tnuva in 2014 and the government’s plan to allow a major Chinese company to build a railroad from the center of the country to Eilat. This is a huge project of particular strategic importance.

According to Halevy and other critics of the process, Israel should be wary of the possibility of a foreign power with uncertain motives gaining control over the country’s strategic assets. Tnuva dominates Israel’s fresh food industry, and the railroad to Eilat will be a strategic transportation artery of enormous importance. On the other hand, while China has grown closer to Israel over the past few years, Beijing continues to develop an especially close relationship with Iran, considered by Israel to be the “Great Satan” and the major existential threat hovering over the country. As Israel gives China a foothold in its strategic assets, while ignoring how China is drawing closer to Iran, there are plenty of people in the political and defense establishments raising their eyebrows, at the very least.

There are several reasons why Netanyahu is motivated to reorient Israel to the East. The first among them is Israel’s deteriorating relationship with the West, in particular with the United States. Even Israel’s diplomatic elders cannot remember the last time there was no open line for intimate conversation between the US president and Israel’s prime minister.

Netanyahu has a long history of trying to reduce Israel’s strategic dependence on the United States. When he was first elected prime minister in 1996, he announced in a speech to the two houses of the US Congress that he would work for the gradual reduction of American aid to Israel, leading to its elimination entirely. The bottom line is that US civilian aid to Israel has, in fact, been eliminated, but military aid has increased at the same rate, so Israel has not lost a single dollar in American money in the process. After he regained the premiership in 2009, Netanyahu faced a liberal president and a Democratic administration. The distance between them and his own worldview and policies was vast, so it is only natural that Netanyahu began investing his energies in other places.

The second major factor behind Israel’s reorientation to the East involves the boycott, divestment and sanctions movement. The first signs of a boycott against Israeli products by European markets, the threat of sanctions and the deteriorating relationship with the United States converged to bring Netanyahu to develop the “Asian option.”

In the midst of the economic crisis a few years ago, Netanyahu asked his ministers to reduce overseas travel as much as possible, except for visits to China. Netanyahu has discovered the enormous Chinese market over the past few years. In 2013, he conducted a well-publicized official visit to China, and in March 2016, Chinese Vice Premier Liu Yandong reciprocated with a visit to Israel. During Liu's visit, Netanyahu proposed announcing the creation of a “free trade zone” between Israel and China, stating that the Chinese are discussing it very seriously. He then said that Israel was prepared to create a free trade zone with China “immediately.”

Netanyahu’s China policy has run into a warm Chinese bear hug. Meanwhile, the Chinese are not paying for it in any way. Their relationship with Iran remains unchanged, and when it comes to the Palestinian-Israeli conflict, they are still neutral at best. At the same time, they are storming the Israeli market through wide-scale acquisitions of Israeli companies. Tnuva is a good example, but there are many others. They purchased Makhteshim Agan Industries Ltd. in 2011, partnered in investing in the Israeli GPS app Waze, which was sold to Google in 2013, and recently acquired a wide range of Israeli technology, high-tech and biotech companies for billions of dollars.

Li Ka-shing, the world's wealthiest Chinese citizen, made a fat profit on the sale of Waze. In 2013, he announced that he was prepared to donate $130 million to the Technion (Israel Institute of Technology) — on the condition that it establish a technology-based branch in China.

In the short term, the Israeli economy is seeing enormous benefits from China’s assault. The process is filling state coffers and increasing the potential for profit. The question is, what will happen beyond the short term? As in diplomacy, some people here are warning of China’s tendency to copy ideas and technologies. While Israel is poor on natural resources, it is very rich in ideas and technologies. The real concern that must therefore be addressed is whether Israel knows how to protect those resources.