With no proper regulation or restrictions to safeguard Israeli national interests, China multiplies its efforts at taking over leading Israeli companies in the food, insurance and high-tech sectors. 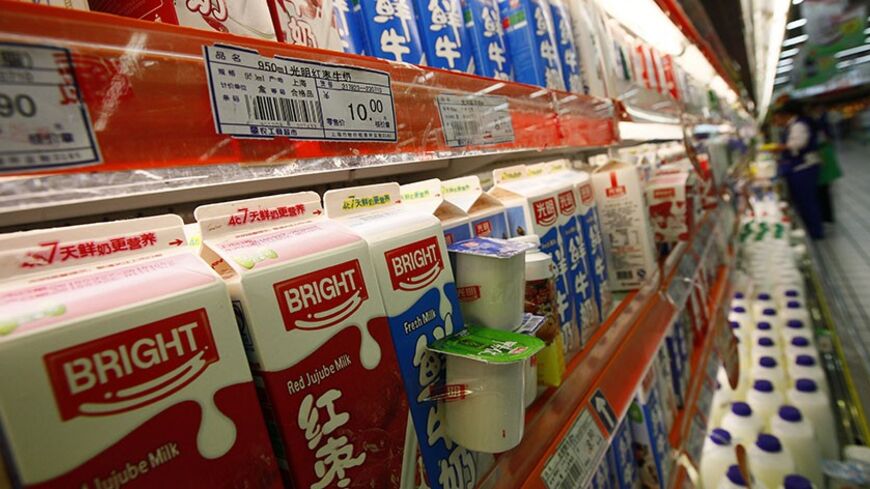 Milk produced by Bright Food is displayed for sale on shelves at a supermarket in Shanghai, Sept. 27, 2010. - REUTERS/Aly Song

Toward the end of the debate at the Knesset Economic Affairs Committee on Feb. 25 regarding the significance of the sale of the Tnuva [food] Corp. to the Chinese, Rahamim Eliyahu, a member of the board of Israel Cattle Breeders Association, told of his meeting with Zehavit Cohen, the CEO of Apax Israel, in the period before the sale of the company to the British Apax.

Cohen had sought to ease his opposition to the deal, promising him that this was a strategic acquisition for at least 30 years, and he believed her. Less than six years have passed, and now she stands behind the contacts regarding a deal to sell the company to the Chinese firm Bright Food. This time, too, Cohen is operating in a similar fashion: personal meetings to soften opposition and the promise that the Chinese have no intention of importing cheese to Israel, which would hurt the local product. You cannot blame Eliyahu for no longer buying Cohen's promises.

Cohen has already displayed a lack of receptiveness to the Israeli public interest in the days preceding the social protests. She preferred to increase the revenue of Apax from the largest food company in Israel, and gave a hand to the increase of the price of cottage cheese by tens of percentage points. This decision brought about a successful consumer boycott against Tnuva, and was one of the causes for the outbreak of the social protest in the summer of 2011. Cohen was then forced to resign from her position as chairwoman of the board at Tnuva, while in the background lay the claim that the increase in the national price of cheese was the result of the sale of Tnuva to foreign hands.

This time again Cohen proves that before anything she’s a loyal emissary of Apax: She is working hard to advance the deal with the Chinese, which, if it comes through, will enrich Apax by more than $6 billion — more than six times the price at which it bought 56% of the shares of the company in 2008. It turns out that she cannot be expected, as an Israeli businesswoman, to see the national interest. This is exactly where the state has to fulfill its role and take care of its citizens.

It seems that this time Cohen will have a hard time delivering the goods to Apax. Ever since the social protest, the Israeli public has become much more involved in such processes. The social protest over the gas reserves for import has been productive and they have been limited to 40%, in contrast to the wishes of the Finance Ministry. In April 2013, Finance Minister Yair Lapid opposed the sale of Israel Chemicals to a Canadian company in the name of the public interest.

The debate in the Economic Affairs Committee, as well, in which all of the Knesset members opposed the sale of Tnuva to the Chinese, would have been conducted totally differently before the social protest. All the signs testify that the struggle to stop the deal is going to the next public battle. The chairman of the committee, Avishay Braverman, and members of Knesset Shelly Yachimovich, Micky Rosenthal, Michal Rozin and Itzik Shmuli called on the public to protest the sale of Tnuva to the Chinese and not to leave it in the hands of the government, which in the meantime has shown indifference to the issue.

In the case of a huge company in Israeli terms, like Tnuva, this matter does not touch only on aspects of the costs of living, but also on no less weighty questions, such as Israeli citizens’ basic food security, now supposed to pass to the hands of a company controlled by the Chinese government. China is in the midst of a global shopping spree for huge companies in almost every field, as part of a takeover strategy not just of the resource itself — but of the field of research and knowledge. One should consider this, too. Other questions that arise from this deal are the rights of 7,500 Israeli employees of the company and the relinquishment of revenues that could have reached Israeli citizens.

As in other fields, when it comes to the sale of Israeli companies to foreign firms and governments, it turns out that Israel has no legislation, regulations or responsibility. Thus, 60% of the shares of Makhteshim Agan Industries were sold three years ago to the Chinese ChemChina company, without a debate of the significance and implications of the deal for the Israeli national interest. In a similar way, Minister of Transportation Yisrael Katz and Prime Minister Benjamin Netanyahu are pushing to give the contract for the project to build the train line to Eilat, worth $23 billion, to a Chinese company.

Also currently being discussed is the sale of 32% of Clal Insurance, the second-largest insurance company in Israel, which handles 110 billion shekels (some $31 billion) of the public’s savings, to the Chinese. In Canada, a law was passed some six months ago to make it harder for Chinese firms to buy local gas companies. In the United States, there’s government regulation that has stopped some similar deals. In Israel, the field is wide open. It may be that the former head of the Mossad, Efraim Halevy, is sowing needless fear when he claims that Chinese control of an asset like Tnuva is a threat to Israel, but these arguments, as well as others, should be looked at by a professional committee of experts in the field.

Halevy, who chairs the Shasha Institute for Strategic Research at Hebrew University, said at the debate in the Knesset that for the Chinese, Tnuva is not just a food supplier. According to him, it is important to the Chinese government to acquire scientific knowledge and the information that Tnuva has accumulated, as a basis for producing food for the masses. “The Chinese are very quick. If we don’t wake up, we’ll discover that our academy is in their hands, too,” he said.

According to Yotam Margalit, an expert in political economy, the dilemmas arising from the attempt to sell Tnuva to the Chinese are not unique to Israel. In a conversation with Al-Monitor, he said that in the last two decades the extent of foreign investments in many countries has greatly increased, and that alongside the many advantages this holds, questions have been raised regarding the degree of involvement and influence that such acquisitions allow a foreign country or company in the affairs of another country.

Margalit provides an example from the last year: an incident where the Australian government stopped the sale of a local wheat company to a US-controlled firm, claiming that it hurt the national interest. “This joins a collection of large and controversial deals with which countries have been struggling,” he explains.

The extent to which what we do not know is greater than what we know about the deal in the works could be glimpsed in an inadvertent remark at the debate from Itzhak Bader, the chairman of the Kibbutz organization Granot Central Cooperative, which supports the deal. Bader hinted that it could be that the Chinese national company would take Tnuva public in one of the world’s stock exchanges, and thus turn it into a public company in private control. It may be that Bader thus sought to placate the opponents of the deal and prove that the company would not remain in the control of the Chinese government, but he actually raised a no less problematic possibility, of Israel’s losing the control and ability to regulate what happens at Tnuva.

Bader’s slip of the tongue, like Halevy’s claims and the fears expressed by the representatives of the dairy farmers association, should be a warning sign and a part of a wider public debate. An in-depth, professional and unaffiliated inquiry should be conducted to examine the significance of Tnuva’s deal and its influence on the social and national interests of Israeli citizens — in terms of this deal and future deals such as the sale of pharmaceutical giant Teva. These should not be left in the hands of businessmen again. This is an opportunity to correct that.