The imminent unveiling of an Iranian film about the deadly hajj stampede in 2015 is causing waves even before it has been screened, with some warning that it could further inflame relations between Iran and Saudi Arabia. 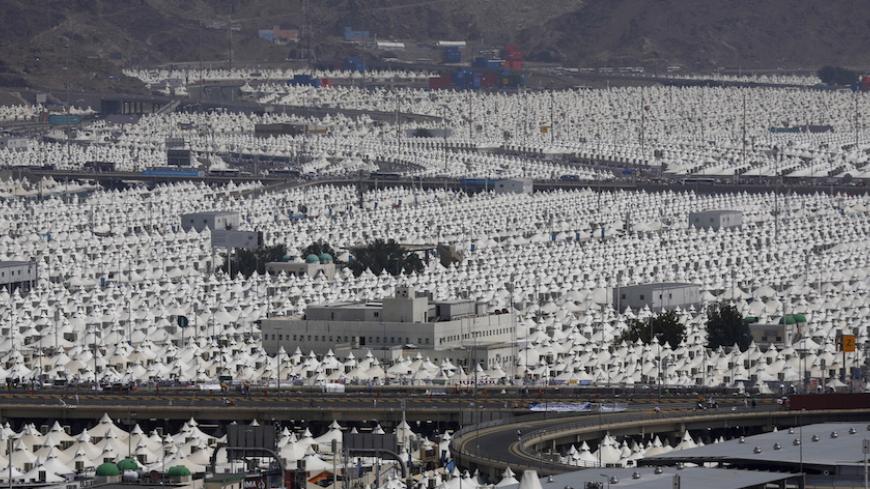 Sept. 24, 2015, was a tragic day. More than 700 people were killed in a stampede during the annual hajj pilgrimage in Saudi Arabia. The disaster occurred on the first day of Eid al-Adha, when pilgrims perform the ritual known as "stoning the devil" in Mina, near the holy city of Mecca. In Iran, the event is remembered as the “Mina tragedy,” given that some 500 Iranian pilgrims lost their lives. Now, nearly one year later, an Iranian filmmaker is preparing to unveil “September 24”; probably the first cinematic depiction of the tragedy.

One of the film’s main characters is Mohsen Haji Hassani Kargar, an Iranian “qari” (reciter of the Quran) who was killed in the disaster. The 27-year-old, who was known as Haji Hassani, had won first prize at the 57th International Quran Competition in Malaysia in June 2015 and was performing the hajj with a delegation of Quran reciters. “September 24” revolves mostly around the story of Haji Hassani’s life — and death. It has already stirred controversy, with one Saudi website saying that it could become a “new source of tension in Tehran-Riyadh relations.”

Maryam Ebrahimi, the director and producer of the film, told Al-Monitor, “When Iran’s leader said the Mina tragedy must not be forgotten, I thought the language of art could help do this and keep the memory [of the stampede] alive. At the time I was busy with another film about a martyr, who had nothing to do with the Mina [tragedy]. So I put that project aside and decided to make this film instead, with my own personal budget. The Hajj and Pilgrimage Organization of Iran as well as other relevant organizations only offered spiritual support. No financial aid was provided.”

Ebrahimi, who is fascinated with recitations of the Quran and has been memorizing its verses for the past two years, told Al-Monitor, “This is why Mohsen Haji Hassani’s character was interesting to me, since he was also a reciter. Of course, there were — and are — a lot of sensitivities about this film. These same sensitivities led to the writing of eight different screenplays for the movie.”

“September 24” is Ebrahimi’s first experience as a director. In the past, she has produced several films for Iran’s home video entertainment industry. She told Al-Monitor, “This film is based on a real event. It would have been easier if we were making a documentary. However, retelling a tragedy where the main character is a reciter of the Quran makes the work more sensitive. There was also a great deal of sensitivity about how the Mina tragedy should be defined in the film. In fact, the key concern was how we wanted to portray this tragedy.”

The movie begins with a scene from Haji Hassani’s childhood and ends with a scene in Mina. The main locations used for filming were Iran’s capital Tehran and the northeastern Iranian city of Mashhad. According to Ebrahimi, the tense relations between Iran and Saudi Arabia made it impossible to film the relevant parts on Saudi soil.

There is of course the question of how intertwined the film has become with the political tensions between Iran and Saudi Arabia. Ebrahimi said, “The tragedy took place in Saudi Arabia, and so I think this country [Saudi Arabia] is definitely responsible [for the stampede] and should be condemned. Yet we have tried very hard not to enter the political arena. We are not looking for someone to blame and have tried to portray the tragedy through the eyes of those families who lost their loved ones.”

The Arabic-language website Eremnews described the film as a criticism by Iran of Saudi Arabia’s management of the hajj and says it could become a new source of friction between the two countries.

Iranian actor Amin Zendegani, who plays Haji Hassani in the film, has dismissed the idea that “September 24” has a political angle that could further tarnish relations between Tehran and Riyadh. In an interview with Al-Monitor, Zendegani said, “I do not believe in this prediction. Crises happen when a certain angle is pursued. However this film has only tried to show what happened to the victims’ families following the tragedy, without taking any specific angle. Therefore, this film is just an account of the disaster and a reminder that no official apology or move was made to help them cope with the pain. We must acknowledge that such an incident, with its vast dimensions, requires accountability. Yet the film has taken no political angle and its main focus is on the situation of the families of the martyrs [of the Mina stampede].”

Zendegani thinks that in addition to its documentary sections, some storytelling is needed to help make the film more interesting. He told Al-Monitor, “For me, playing the role of a reciter of the Quran — who was real and lived in my lifetime — was very alluring. We tried very hard to do justice to his true character. However, imagination and storytelling are part of cinema. I hope that this reciter’s family can accept this, so that the dimensions of this tragedy, which has affected many families in Iran and other countries, can be shown more broadly through cinema. I hope works of art such as this film can play a role in preventing unfortunate incidents such as the tragedy in Mina from happening [again].”

With the anniversary of the disaster in Mina coming up in six weeks, the film — which was initially titled “Ms. Sadat” — is in its final stages of production. According to Ebrahimi, the movie will be dubbed in several languages and be screened internationally. She told Al-Monitor, “This film is about the families of those who were killed in this tragedy from everywhere around the world. That’s why we changed the name. We thought the name should be shared by all languages.”

Ebrahimi said that if the production is finalized by Aug. 21, it will be submitted to the Resistance International Film Festival in Tehran. She added, “Otherwise, its first debut will be on the anniversary of the Mina tragedy, and for the martyr’s families. The film’s next destination will be the International Fajr Film Festival.”