Award-winning director Asghar Farhadi’s latest film to be chosen as Iran’s Oscar submission has come under fire from conservative critics at home. 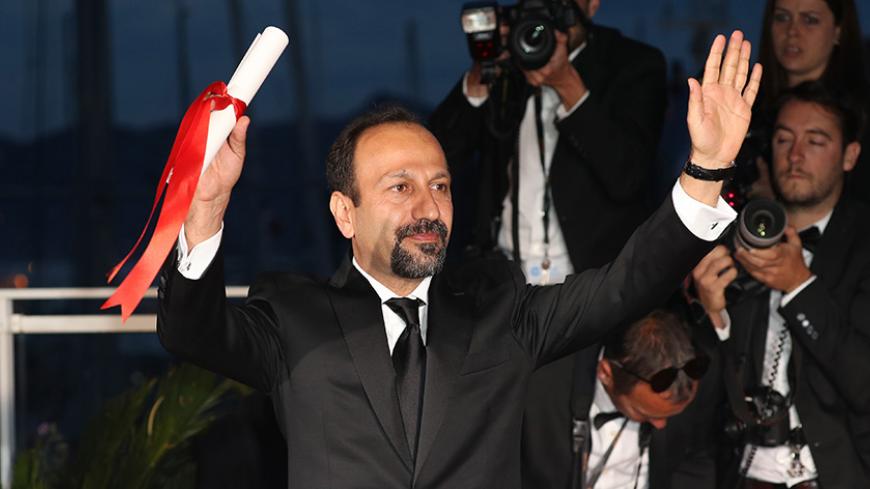 Director Asghar Farhadi poses with his best screenplay award for the movie “The Salesman” during the Palme d'Or Winner photo shoot at the 69th annual Cannes Film Festival at the Palais des Festivals in Cannes, France, May 22, 2016. - Andreas Rentz/Getty Images

Speculation surrounding which film would represent Iran at the 2017 Academy Awards finally came to an end in mid-September with the selection of “The Salesman” by Oscar-winning director Asghar Farhadi. The movie was chosen by a committee of the Farabi Cinema Foundation, which is affiliated with the Ministry of Culture and Islamic Guidance. “The Salesman” won the best screenplay and best male actor prizes at the Cannes Film Festival in May, but Iranian critics are unhappy about its selection for the US awards. They have complained of script problems, that it presents a distorted image of Iranian society and that it undermines family honor and dignity.

In 1997, director Abbas Kiarostami, who died July 4, won the Palme d’Or, the highest award at Cannes, for his “Taste of Cherry.” His accomplishment of becoming the first Iranian to win at Cannes received very little attention or praise in Iran. Kiarostami was not publicly greeted at the airport upon his return to Tehran, nor were there long lines to see his film. In fact, “Taste of Cherry” was banned in Iran. Nineteen years later, however, the situation is very different.

Farhadi was applauded on social media and extended a warm welcome at Tehran's airport following his success in Cannes. Government officials as well as cultural and other political figures congratulated him. The public also welcomed his film, lining up outside cinemas as early as 6:30 a.m. to see it. At the airport, Farhadi had told his lead actor, Shahab Hosseini, “Abbas Kiarostami came through this same route with the Palme d’Or, but some were waiting to hit him in the airport.”

Saeed Ghotbizadeh, an Iranian TV and cinema critic, told Al-Monitor, “In societies like Iran, where the government monitors and has a say in cultural issues, some filmmakers are viewed as close to state organizations because their work contains propaganda or topics that the [political establishment] orders. Other filmmakers who present bold and hot topics are seen as in the cultural opposition. Farhadi belongs to neither of these groups.”

He added, “Farhadi’s cinema is one of storytelling. It is reliant on the presence of a famous actor, and unlike typical cinematic models, deals with general audiences. His films are and have always been among the best [moneymaking] films in Iran’s cinema, and in this sense, are very different from Abbas Kiarostami’s, which were either banned from screens or had low sales.”

Ghotbizadeh is one of the critics of “The Salesman,” saying that he does not consider it to be among Farhadi’s stronger pieces, and that it has “many weak points and is repetitive.”

Saeed Aghighi, a scriptwriter and film critic, views Farhadi’s cinema as employing classic scriptwriting formulas and realistic contexts. Aghighi, who is writing a book on Farhadi’s movies, told Al-Monitor, “Of course, his cinema has faced opposition and negative critiques both in Iran and abroad, as exemplified by critiques in [the French film magazine] Cahiers du Cinema. It also has many fans. Farhadi’s films become broader and more complex every time. They also propose different solutions than Kiarostami’s works. His films are a combination of storytelling and contemporary sociology, which seems equally attractive to both Iranian and foreign audiences.”

“The Salesman” premiered in Iran on Aug. 31. Its draw at the box office again attracted the attention of news outlets and social media networks to its controversial subject of marital rape. After “The Salesman” won at Cannes, Principlist daily Jomhouri-e Eslami ran a piece on May 26 accusing Farhadi of presenting a dark image of Iran to the world and of only seeking to win awards in the West. Meanwhile, hard-line Kayhan daily, whose editor is appointed by the supreme leader, wrote in an editorial on May 24 that the main reason for the film’s success at Cannes was the theme of rape within marriage.

Film critic Masoud Farasati described “The Salesman” as being anti-family due to its rape and prostitution themes. On “Haft,” a program aired on state TV, Farasati accused Farhadi of seeking international prizes by portraying a dark image of Iranian society and families and said his latest film should not be submitted to the Oscars.

“Haft” is hosted by film director Behrouz Afkhami, who is also a big critic of “The Salesman.” Prior to this year’s Cannes festival, Afkhami, a Reformist member in Iran’s sixth parliament (2000-2004), described Cannes as a festival for the LGBT community. His comments met with intense criticism. After Farhadi’s success in France, Afkhami responded to his critics during an edition of “Haft” by asserting, “The Cannes festival does not award prizes based on cinematic values.”

Ghotbizadeh, who criticized Afkhami's assertions, believes that the managers of Iran’s state cinemas and other cultural arenas hold the same view of foreign festivals as Afkhami. He suggested why, stating, “These festivals don’t accept works that have been approved by them [the political establishment] and sometimes focus on a film solely because of the director’s political stance. For instance, we see this in regard to [Iranian director and screenwriter] Jafar Panahi [currently under house arrest and banned from filmmaking since 2010 for political dissent]. Some in Iran’s intellectual circles think this is why some of his simple and sometimes even weak pieces are a constant presence at well-known festivals and often win prizes.”

“The Salesman” is Farhadi’s fourth film to be chosen for submission to the Academy Awards. The others were the 2009 drama “About Elly,” the 2013 French-Italian-Iranian drama “The Past” and “A Separation,” which won an Oscar in 2012, becoming the first Iranian film to win the award. Given Farhadi’s record, Ghotbizadeh does not think the chances are very good that “The Salesman” will win the Oscar, observing, “It is very rare to see the same filmmaker win an Oscar for Best Foreign Film twice in less than five years.”

Ghotbizadeh also expressed concerns about the possible impression being created that Iranian cinema is limited to Farhadi and his works, “He is a great filmmaker, but it doesn’t make sense to have every film he makes represent Iran at the Oscars,” Ghotbizadeh said. “His ability to guide actors and propose mysteries is unique in Iran, but Farhadi is not all Iran’s cinema can offer. If his successes lead to a better understanding of Iran’s cinema, then there is room for hope. But if these awards only paint him as the sole big filmmaker in Iran, it is very discouraging.”