While Asghar Farhadi’s Oscar for “The Salesman” was warmly welcomed by moderates and Reformists, the hard-line media tried to discredit the achievement, opining the award was politically motivated. 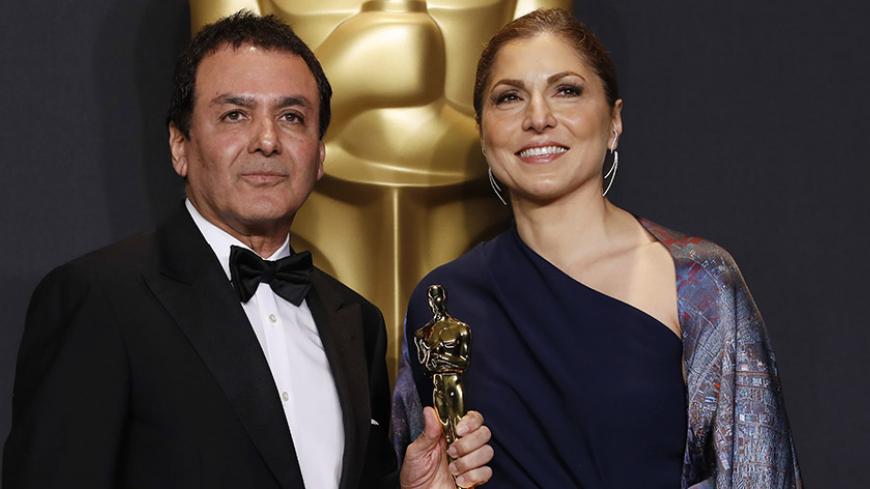 On Feb. 27, around six in the morning, many Iranians were awake waiting to see if Iran would win its second Oscar. Finally, it was announced. Asghar Farhadi’s “The Salesman” won the Best Foreign Language Film award. Social networks burst into happiness, and Iranians celebrated this event as once again Iran’s culture became global.

Iranian Foreign Minister Mohammad Javad Zarif was the first to congratulate Farhadi and the Iranian nation on this success. Various figures, including politicians, athletes and artists, published congratulatory messages on their personal social network pages. While everyone was happy, Iran’s state TV, managed by hard-liners, was struggling with how to cover this piece of news, as the outfit worn by Anousheh Ansari, who accepted the Oscar on behalf of Farhadi, wasn’t appropriate in their eyes. Finally, after a few hours, state TV ran a story about Farhadi’s triumph without showing a picture of Ansari or the Oscar ceremony.

Ansari, famed for being the first female space tourist, and Firouz Naderi, a former director of Solar Systems Exploration at NASA, were Farhadi’s representatives at this year's Academy Awards.

Farhadi and the cast of “The Salesman,” including Taraneh Alidoosti, boycotted the Oscar ceremony following US President Donald Trump’s suspended executive order that banned the citizens of Iran and six other Muslim-majority countries from entering the United States.

Meanwhile, Iranian newspapers and online news sites warmly welcomed the Oscar win. Many local media considered Farhadi’s award a victory of Iranian culture over Trump’s threats. Of note, since taking the office, Trump has repeatedly threatened and warned Iran not to “play with fire.”

In this vein, the Reformist Shargh newspaper chose “An Oscar award against the alt-rights” as its headline. “Without any insulting, attacking and anger … by relying on the creativity of Mr. Farhadi, who represents Iranians in the world, we showed the most effective and efficient reaction to Trump and his executive order,” the daily wrote Feb. 28.

Under the headline of “Humiliation of Trump,” Reformist Vaghaye Daily wrote Feb. 28: “The yesterday morning Oscar ceremony was special to us. American Democrats slammed their Republican president and did whatever they could do [against him], but ultimately, we became the winner of this cold war; the moment Anousheh Ansari and Professor Firouz Naderi went on the stage of Kodak Theater to receive the Oscar award for the best foreign language film was the moment Donald Trump and his unwise executive order were defeated.”

Furthermore, Reformist Mardomsalari described Farhadi’s Oscar as “the peak of cultural diplomacy,” arguing Feb. 28: “'The Salesman' stood up to the Trump government's racial policies better than any others and [managed] to make the public against Trump.”

In keeping with this idea, hard-line Javan newspaper wrote Feb. 28: “In the most political night in the history of Oscar, Asghar Farhadi received his second Oscar. Almost all the filmmakers and critics inside and out of the country, agree [with this idea] that Farhadi owes his second Oscar to Donald Trump and the propaganda of the US Democrat party.”

Moreover, under the headline of “What did 'The Salesman' sell to get Oscar?” hard-line Kayhan newspaper claimed that Farhadi didn’t deserve the Oscar award and his success was tied to Oscar’s anti-Trump policy and the US government order for banning the entry of citizens of seven Muslim countries to the United States.

In response to such criticisms, Mardomsalari rebuked the attacks against “The Salesman,” arguing Feb. 28: “Months before Donald Trump’s victory in the US presidential election, 'The Salesman' got two prizes at the Cannes festival. Plus, selecting this [movie] as the nominee of Oscar [best foreign language film] was done before the racial measure of Trump’s government.” Of note, at Cannes, Shahab Hosseini won the award for Best Actor and Asghar Farhadi won the award for Best Screenplay.