How Iran may have just won a second Oscar 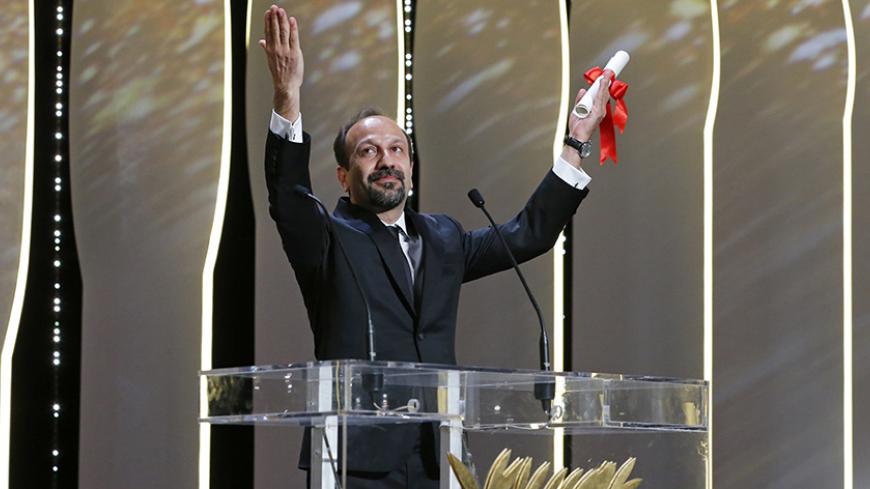 Director Asghar Farhadi, Best Screenplay award winner for his film "Forushande" (The Salesman), reacts on stage during the closing ceremony of the 69th Cannes Film Festival in Cannes, France, May 22, 2016. - REUTERS/Yves Herman

In a statement Jan. 29, Oscar-winning Iranian film director Asghar Farhadi announced that he will not be attending the Academy Awards ceremony later this month. The reason: US President Donald Trump’s Jan. 27 executive order to ban citizens of Iran and six other Muslim-majority countries. Farhadi’s announcement came as Iran was hosting its own Oscars, the 35th Fajr International Film Festival.

This year, the films screened at the Fajr Film Festival were greatly overshadowed by talk of Trump’s travel ban, Farhadi’s subsequent statement and speculation about what will become of “The Salesman,” which is nominated for an Oscar in the Best Foreign Language Film category.

Iranian film critic Reza Sedigh told Al-Monitor, “We were at the venue of the festival at the Milad tower [in Tehran] when Farhadi’s statement was issued. There was clear support for Farhadi’s decision by news agencies and in the conversations within the cinema community. And if there was any criticism, it was about the [specifics of the] content of Farhadi’s statement.”

The statement, which was published in The New York Times, noted, “Despite the unjust circumstances which have risen for the immigrants and travelers of several countries to the United States, my decision had remained the same: to attend this ceremony. … However, it now seems that the possibility of this presence is being accompanied by ifs and buts which are in no way acceptable to me even if exceptions were to be made for my trip.”

In another section, Farhadi slammed “hard-liners” around the world — including Iran and the United States — as “very similar,” writing, “For years, on both sides of the ocean, groups of hard-liners have tried to present to their people unrealistic and fearful images of various nations and cultures in order to turn their differences into disagreements, their disagreements into enmities and their enmities into fears. Instilling fear in the people is an important tool used to justify extremist and fanatic behavior by narrow-minded individuals.”

Sedigh said that some of the cinema elites attending the Fajr Film Festival were hoping that Farhadi would issue a “much stronger and more serious” statement. He said, “For example, he could have copied [British director] Ken Loach’s speech at this year’s Cannes Film Festival or French director Francois Truffaut’s speech at the 1968 Cannes Festival. There was also the insinuation that just like in his films, he had written his statement impartially. The majority [of the Iranian cinema community], however, considered his decision and reaction as wise.”

Three days before Farhadi’s statement, prominent Iranian actress Taraneh Alidoosti, who plays the female lead character in “The Salesman,” announced that she would boycott the Oscars in protest of Trump’s visa ban. Taking to Twitter on Jan. 26, Alidoosti wrote, “Trump's visa ban for Iranians is racist. Whether this will include a cultural event or not, I won't attend the #AcademyAwards 2017 in protest.”

Alidoosti’s co-star, Shahab Hosseini, who won the Best Actor award at the 2016 Cannes Film Festival for his role in “The Salesman,” also took to social media, writing on his Instagram account, “The viewpoints and positions taken by US President Donald Trump are a reminder of a dark and not too distant era in the 1930s and 1940s and the rise of Adolf Hitler, the disastrous consequences of which will not be erased from the world’s memory for centuries to come.” Hosseini ended his note by suggesting that “Hollywood filmmakers should put the making of a film about King Nimrod on their agenda — an ancient mighty king who claimed to be God and was finally killed by a mosquito.”

On the same day as Farhadi’s statement, the Academy of Motion Picture Arts and Sciences — the host of the Oscars — issued a statement voicing concern about Trump’s executive order. However, the academy has yet to react to Farhadi’s boycott.

Sedigh thinks that one can only wait and see what the academy’s reaction will be and which position it will adopt on the ban, saying, “Under the current circumstances and considering the path that the world is on, Farhadi and 'The Salesman' have a collective [and inclusive] identity. … At present, 'The Salesman' is perhaps the most effective and major artistic reaction to Trump’s executive order that exists in Iran.”

Iranian Oscars submissions are a source of political and cinematic challenges within the country every year. Aside from the hard-liners criticizing the very idea of even being participating in an event such as the Oscars, the main challenge is choosing a film that is best aligned with what the authorities call “Iranian-Islamic culture and values.” The submission of “The Salesman” was not immune to these challenges. Some critics see the film as a dark representation of Iranian society, while others see it as weak in comparison to Farhadi’s previous works such as “About Elly” or “A Separation.” As such, the general view has been that “The Salesman” doesn’t stand much of a chance of winning an Oscar — that is to say, before the boycott.

Now, it seems as if the director of “The Salesman” will be the noisy absentee at this year’s Academy Awards. Indeed, Iranian critics of Farhadi’s latest work think his boycott will conversely make it highly likely that it will win an Oscar.

Sedigh said he sees no issue with “The Salesman” potentially winning an award because of the boycott, “The Oscars ceremony is one of the most political festivals in the world. There are numerous examples of this … from Marlon Brando, who didn’t attend the ceremony or receive his award in protest at the film industry’s behavior toward Native Americans, to the film 'Argo,' whose triumph at the Oscars was announced by [former US First Lady] Michelle Obama from the White House.”