Iranian officials and media react harshly to US President Donald Trump’s executive order to ban the entry of Iranian citizens to the United States. 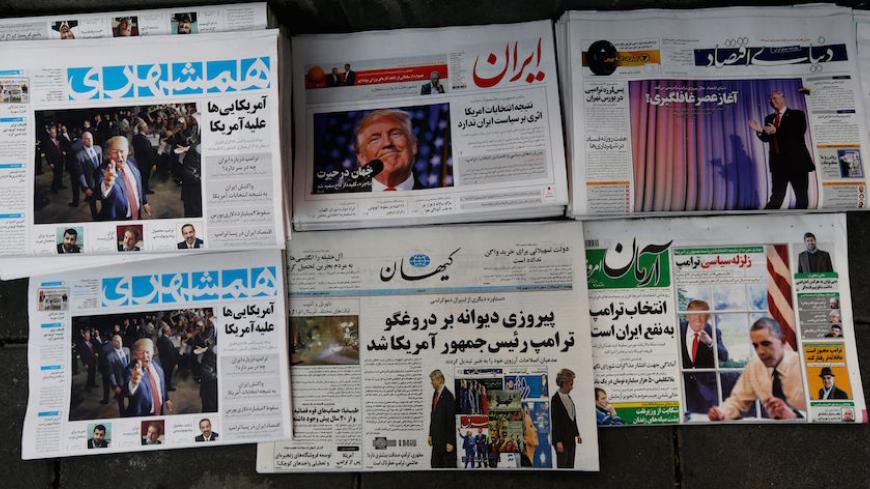 Newspapers in the Iranian capital, Tehran, placed Donald Trump on their front pages after his election as US president, in this photo taken Nov. 10, 2016. - GETTY/Atta Kenare

US President Donald Trump’s Jan. 27 executive order to ban the entry of citizens of seven Muslim-majority countries, including Iran, continues to prompt reactions from both Iranian officials and media.

On Jan. 28, in remarks interpreted by Iranian media as a direct hit at Trump for seeking to build a wall along the US border with Mexico, President Hassan Rouhani said, “Today is not the time for raising walls between nations; they have forgotten that the Berlin wall collapsed a long time ago. … Now is the time for being neighbors.”

Rouhani, who was speaking at the 17th Convention of World Federation of Tourist Guide Associations in Tehran, continued, “Breaking trade pacts does not contribute to the global economy and development.”

On Jan. 29, Iran’s Foreign Minister Mohammad Javad Zarif took to Twitter to express his disappointment and anger about the executive order, writing, “#MuslimBan will be recorded in history as a great gift to extremists and their supporters. “

He continued, "#MuslimBan shows [the] baselessness of the US claims of friendship with the Iranian people while only having issues with the Government."

"While respecting Americans & differentiating between them & hostile U.S. policies, Iran will take reciprocal measures to protect citizens. … Unlike the U.S., our decision is not retroactive. All with valid Iranian visas will be gladly welcomed," Zarif concluded.

The Swiss envoy to Iran, who represents US interests given the absence of diplomatic relations between Iran and the United States, was summoned to the Foreign Ministry on Jan. 29 in protest of Trump’s executive order.

Ali Akbar Velayati, the foreign policy adviser to the supreme leader, said Jan. 29, "It is the pride of Iranians that they don't need acceptance from an imbalanced individual such as Trump. … Without doubt, these kinds of measures will be detrimental to the future of the United States and what can be evaluated about the future of this country is that day by day its domestic problems are getting worse."

Also on Jan. 29, parliament Speaker Ali Larijani slammed Trump’s move, saying that it “showed their violent and racist spirit,” adding that the US government “is even afraid of its own shadow.”

Referring to prominent Iranian actress Taraneh Alidoosti’s decision to boycott the upcoming Academy Awards in protest of the “racist” visa ban, Larijani described her stance as an example of respect for Iranian national values and a sense of patriotism.

In this vein, Hamid Aboutalebi, the deputy chief of staff of the president for political affairs, tweeted Jan. 27, “Mr. President of the United States, the Iranian nation is the symbol of identity and Aryan history, Islamic humanitarianism, freedom, liberty and philanthropy. You have definitely seen the Cyrus Cylinder? The Iranian nation is an ancient and very civilized nation. It doesn’t tolerate violence and terror and will stand up to it.”

He continued, “You have definitely read history, Mr. President. You should remember that the Iranian nation has been strong and proud for more than 3,000 years. Nobody has been able to belittle Iranians during their history.”

Of note, the Cyrus Cylinder, which dates to the 6th century B.C., has been referred to as the oldest known charter or symbol of universal human rights.

Meanwhile, Masoud Khansari, the chairman of Tehran’s Chamber of Commerce, said Jan. 28, “Iranian businessmen, like other persons, aren’t allowed to go to the United States following Trump’s executive order, and this order puts some restrictions on the trade between the two countries.”

The executive order has been a gift to Iranian hard-liners, who have continuously sought to undermine and question Rouhani’s foreign policy achievements, including the Joint Comprehensive Plan of Action (JCPOA) signed with six world powers in July 2015.

the hard-line Kayhan daily, under the headline “The first signature of Trump on the anti-Iran document,” wrote Jan. 29, “The new situation of today is clearly the result of the weakness of our country’s [nuclear] negotiating team, and is the fruit of trusting the false promises of the United States. If the Foreign Ministry had dealt with the first violation of the JCPOA with the Obama administration’s approval of the [December 2015 US law to exclude nationals of Iran and several other Muslim-majority countries from the] Visa Waiver Program and forbidding tourist trips, Trump wouldn’t have dared to raise his excessive demands to an extent that is a practical violation of the JCPOA.”

Hard-line analyst Foad Izadi told the ultraconservative Vatan-e-Emrooz on Jan. 29, “The question is why the situation has worsened after the JCPOA. Now the time has arrived for the government to change its foreign policy toward the United States, and [the government] should answer for why the outcome of its policy of approaching the United States is this new situation.”

However, Amir Abolfath, a foreign policy analyst, told the Reformist Shargh daily Jan. 29, “The important matter is that we shouldn’t display a hysterical reaction, and the supreme institutions of the establishment should make decisions based on accurate studies [of the situation]. We should be cautious not to be trapped by the United States. … The more serious danger [for Iran] than a violation of the JCPOA by the United States is that they shouldn’t succeed in provoking us into violating the JCPOA.”

Meanwhile, under the headline “The wall of Trump [has] reached Iran,” Reformist Shahrvand daily published a report about the problems caused by the executive order.

In an interview with Shahrvand on Jan. 29, Mehrdad, a mechanical engineering student who has been admitted to a doctoral degree program at the University of Rhode Island, said the executive order could destroy the chances of hims studying in the United States. “There is nothing I can do except wait. During this [90-day] period [outlined by the executive order for review of entry requirements], I will surely go to the US Embassy [in a neighboring country], and I hope that at least this [order] will not be extended,” Mehrdad said.

Speculation has also mounted about whether Oscar-winning Iranian director Asghar Farhadi, nominated for an Academy Award this year for his film “The Salesman,” will be able to attend the awards ceremony in Los Angeles.

The public relations team of “The Salesman” said Jan. 28, “Mr. Farhadi faces no legal prohibition to travel to the United States, but he will state his decision about whether to attend the ceremony in the next few days.”

Farhadi's “A Separation” won an Oscar for best foreign language film in 2012.

Then, on Jan. 29, the prominent director announced he would not be attending. “I neither had the intention to not attend nor did I want to boycott the event as a show of objection, for I know that many in the American film industry and Academy of Motion Picture Arts and Sciences are opposed to the fanaticism and extremism which are today taking place more than ever. … However, it now seems that the possibility of this presence is being accompanied by ifs and buts which are in no way acceptable to me even if exceptions were to be made for my trip.”

He added, “Hard-liners, despite their nationalities, political arguments and wars, regard and understand the world in very much the same way. … To humiliate one nation with the pretext of guarding the security of another is not a new phenomenon in history and has always laid the groundwork for the creation of future divide and enmity.”

Farhadi concluded, “I hereby express my condemnation of the unjust conditions forced upon some of my compatriots and the citizens of the other six countries trying to legally enter the United States of America and hope that the current situation will not give rise to further divide between nations.”