Why did Netanyahu appoint a settler as top NY diplomat?

Prime Minister Benjamin Netanyahu has expressed his commitment to the two-state solution in May, but has nevertheless appointed settler leader Dani Dayan as consul general in the United States. 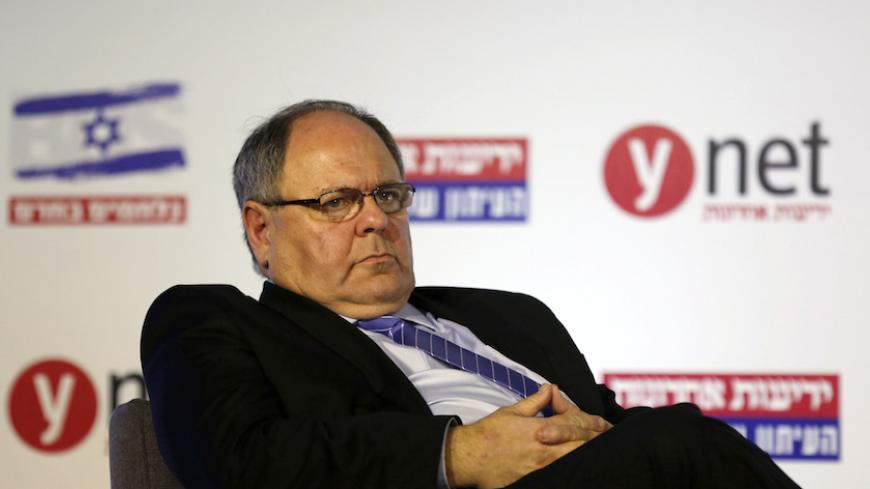 Former settler leader Dani Dayan, who was announced as the consul-general in New York on Monday, participates in a conference on fighting the anti-Israel boycott in Jerusalem, March 28, 2016. - REUTERS/Ronen Zvulun/File Photo

Once again, the Israeli right wing is correct in claiming that the left has taken control of the media. In late May, Israeli media outlets disseminated the following left-wing statement: “The Arab Peace Initiative contains positive elements that could help revive constructive negotiations with the Palestinians. … We are willing to negotiate with the Arab states revisions to that initiative so that it reflects the dramatic changes in our region since 2002, but maintains the agreed goal of two states for two peoples.” For those who have forgotten, the peace initiative is based on the establishment of a Palestinian state within the 1967 border lines (with possible land swaps) and does not mention the term “Jewish state.”

The above remarks were spoken by none other than Prime Minister Benjamin Netanyahu at the ceremony anointing Avigdor Liberman as defense minister on May 31. The leader of Yisrael Beitenu, a party not known for its leftist leanings, gave the prime minister’s declaration of diplomacy his full-throated support. “I want to remind people that for many years … I spoke more than once about recognizing, that same solution of two states for two peoples,” Liberman told listeners. He added, “[Egyptian] President [Fattah] al-Sisi's speech was very important and has created a genuine opportunity. We must try to pick up the gauntlet.”

Naturally, Israel’s official representatives are required to present this position at home and abroad. It therefore stands to reason that a government that advocates a two-state solution would not entrust an important diplomatic mission to a citizen who declares his out-and-out opposition to said solution. Sending a former senior official of the Judea and Samaria Settlement Council to encourage US Jews to support the establishment of a Palestinian state in Judea and Samaria is almost like appointing anti-Zionist, Israeli Arab Knesset member Haneen Zoabi of the Joint List as a Jewish Agency representative to encourage diaspora Jewry to move to Israel. Once again, however, Israeli fact trumps fiction.

On Aug. 1, Dani Dayan, a veteran West Bank settler, assumed his position as Israeli consul general in New York. He was awarded the coveted position after the Brazilian government refused to accept his appointment as Israel’s ambassador because he is a resident of an occupied territory. (Of note, in 2006 the George W. Bush administration confirmed the nomination of Sali Meridor, a resident of the Kfar Adumim settlement, as Israel’s ambassador to Washington.) Unlike with ambassadors, the appointment of a consul does not require the approval of the host government.

Dayan had spent the last few years on a public diplomacy campaign in Israel and abroad to strengthen opposition to the two-state solution and to encourage expansion of the settlement enterprise. Thus, for example, at the July 2014 Israel Conference on Peace, sponsored by Haaretz, Dayan said there were two problems with the two-state solution: “It is not attainable, and if it is attained, it will not bring peace, only serve as a prelude to the next war.” He went on to liken the peace process to a “desert mirage, hot air.”

In an inaugural article as a senior Israeli diplomat on Aug. 1, Dayan wrote in The Huffington Post that representing Israel, which is led by a largely conservative government, in a liberal city like New York is likely one of the most challenging but exciting jobs that Israel’s foreign service has to offer. Indeed, a challenging job. He will probably have to try and convince people of liberal persuasions that expanding the West Bank settlement where he has his house is compatible with promoting the two-state solution.

Dayan pledged in the article not “to ignore the elephant in the room,” namely, “The Conflict,” and the “heated discussion how it should be solved or managed.” It is unclear, however, on which side of the argument he plans to position himself. If Dayan adheres to his belief that the two-state solution is a recipe for war, he would seemingly be betraying those who dispatched him. On the other hand, if he faithfully fulfills his duty and explains the importance of the two-state solution for the attainment of peace, he would be lying to himself. The man who served as chairman of the West Bank settlement council and who ran for office on the HaBayit HaYehudi's Knesset list is considered honest, a man known for speaking his mind. How will he deal with this dilemma?

Dayan has quite easily found a way out of this thicket. As he wrote in his article, he will explain that the Palestinians, not the Israelis, are to blame for a Palestinian state not having been established. The Palestinians want to annihilate the occupier, and they missed every opportunity to have a state of their own. Dayan will not be the only one in Israel’s New York delegation building who has conducted a campaign against the prime minister’s official policy in regard to the establishment of a Palestinian state.

Danny Danon, who heads Israel’s delegation to the United Nations, led the opposition to a Palestinian state within the Likud’s Knesset faction, arguing that it would endanger Israel’s existence. Ron Dermer, Israel’s ambassador in Washington, is the third side of the right-wing triangle of Netanyahu’s political appointees in the United States. His close association with Republican gambling tycoon and Netanyahu patron Sheldon Adelson and his involvement in Netanyahu’s invitation to address Congress in March 2015 to try to turn lawmakers against the nuclear deal with Iran made Dermer a persona non-grata in Democratic circles.

Who fills the Israeli consul general’s chair in New York is actually not so important. Far more relevant is who will sit in the Oval Office come January. The current White House tenant has said that he believes Netanyahu’s 2015 statement that as long as he is in power in Israel, there will not be a Palestinian state, contrary to the prime minister's “leftist” declarations in favor of two states. Netanyahu has much in common with the Republican nominee, Donald Trump: Both are experts at saying one thing and the complete opposite in the same breath.

On the other hand, at the home of Hillary Clinton, the Democratic nominee and the leading contender for the White House, they remember well Netanyahu’s tortuous maneuvering during the negotiations with the Palestinians. They learned firsthand that Netanyahu’s intentions cannot be judged by his words claiming a yearning for peace, but only by his deeds. Take, for example, talking about a diplomatic arrangement with the Palestinians and then appointing outspoken opponents of the idea to the state’s top diplomatic posts in the most important country in the world.