How they blew the coup

The actions of Hakan Fidan, the director of the National Intelligence Organization, forced the coup plotters to alter their plans, ultimately dooming their attempt. 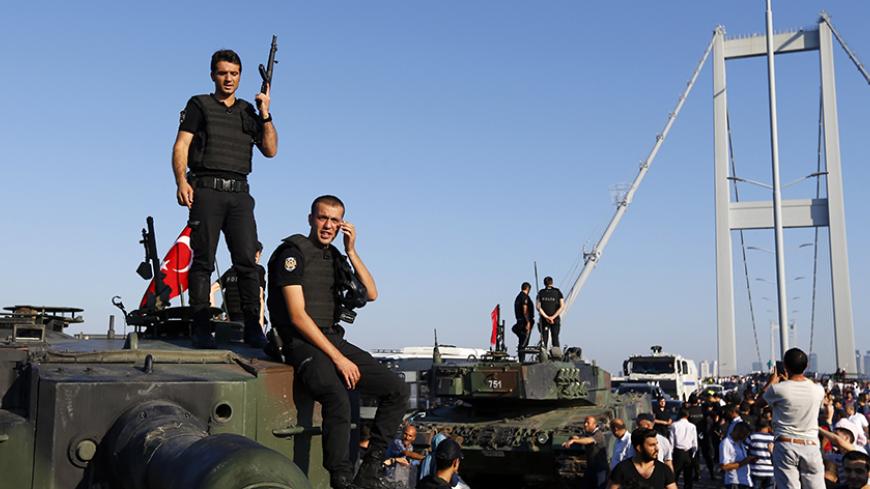 Policemen stand atop military armored vehicles after troops involved in a coup attempt surrendered on the Bosporus Bridge in Istanbul, July 16, 2016. - REUTERS/Murad Sezer

On the evening of July 15, Turkish TV networks informed the public around 11 p.m. that a small group of renegades from the Turkish Armed Forces linked to the Gulenist movement had launched a coup. Since then, there has been endless speculation about the failed attempt, including whether the coup was a ruse engineered by President Recep Tayyip Erdogan. In a society that cherishes conspiracy theories, there has been nothing but confusion, even among senior government officials and generals. I was an eyewitness to the long night in Ankara, and here are some of my findings about that night corroborated by top brass and senior government officials.

The National Intelligence Organization (MIT) had received information about a possible coup attempt. It was not the first time that MIT had received such raw intelligence. Director Hakan Fidan worked diligently from 3 p.m. until early the next morning to abort the attempt. Fidan contacted the top brass at the General Staff and took measures to potentially head off any coup. At that point, the coup plotters, much better organized and greater in number than initially thought, decided to move the timing forward rather than abort the operation. In short, Fidan’s diligence forced them to launch their plot six hours earlier than planned.

This had important repercussions that made the plotters appear incompetent. First, they failed to impose proper command and control over the armed forces. Indeed, early in the process, Brig. Gen. Semih Terzi, a prominent plotter, was killed by a junior officer. Terzi’s death not only demoralized the coup plotters but also crippled their command and control system. The plot could no longer be controlled from a single center, and instead weakly linked groups launched uncoordinated actions.

One question has perplexed many: If the operation were a real coup attempt, why was Erdogan not detained at the start? Because some of the groups lacked means of communication and therefore did not know that the timing had been changed. The members of the elite commando unit that had been tasked with seizing Erdogan at the resort town of Marmaris had turned in their mobile gadgets and thus could not be alerted to the altered plan. Sticking to the original plan, they went to detain Erdogan at around 3 a.m. and couldn’t find him.

High-level security personnel told Al-Monitor that the coup plotters had not planned to kill Erdogan or Fidan, but rather to hold them captive to further humiliate them. The most elite forces of the Turkish air force Search and Rescue Team and Underwater Defense and Attack were charged with capturing Erdogan. That is why his hotel in Marmaris was not bombed. There are lingering fears that unaccounted-for commandos from these coup units could carry out targeted assassinations.

Failures were also evident in the efforts of the coup plotters to take control of Turkish media outlets. First, they failed to seize Turksat, Turkey’s satellite and cable communications company, and therefore take control of mobile communications, including disabling them. Had they done so, it would have prevented Erdogan from using FaceTime to speak to the public and broadcast his message on television. The small detachments sent to take control of state and private channels were not only too late, but also too small in numbers to be effective.

Once it was understood that the coup plotters were not going to back down, the MIT activated its anti-aircraft guns (DShK "Dushka" 12.7 mm). This caught the coup plotters by surprise, because they did not know that the MIT possessed and was able to deploy these weapons. Anti-aircraft weapons similarly protected the Presidential Palace, which is why it did not sustain heavy loses, unlike special operations units and police headquarters in Ankara. It was the first time that the MIT demonstrated its ability to engage in combat. The helicopters transporting forces to take the MIT could not land. The MIT got through the coup attempt with only three of its personnel wounded.

Despite all Fidan’s hard work behind doors, he has been criticized for not sharing information sooner with Erdogan about the possibility of a coup. The most likely reason is that this was not the first time raw intelligence about a possible coup had reached the MIT. Given the assurances of top military officials, Fidan most likely did not want to trigger a false alarm. He did, however, call the head of Erdogan’s security detail to warn him to be on alert. His failure to inform the president and Prime Minister Binali Yildirim in a timely manner is expected to cost Fidan his job.

Meanwhile, pro-government media outlets have accused Washington of supporting the coup plotters, stoking strong resentment among the Turkish public toward the United States. That Fethullah Gulen, leader of the Gulenist movement, still resides in the United States and the Obama administration waited for three hours before speaking out in defense of democracy in Turkey are the two main reasons Turkish government elites suspect the United States of cooperating with the Gulenists.

On top of that, WikiLeaks has released some 300,000 emails from Justice and Development Party (AKP) officials. AKP elites are convinced that Gulenists had collected the emails and passed them on to WikiLeaks. The theory is that WikiLeaks timed the release of the emails to follow what was to have been a successful coup. Erdogan would be in custody, and the emails’ contents would help in further humiliating him and justify the coup.

The email dump must have created shock waves among the AKP elite. Turkey's internet watchdog blocked access to the WikiLeaks website in Turkey on July 20. The Telecommunications Communications Board said that an “administrative measure” had been taken against the site.

There are a few takeaways to be gleaned from what officials confirmed to Al-Monitor. The coup attempt was not the work of a small group of renegades, and the plan was not amateurish. The coup plotters had support from all segments of the armed forces and managed to seal all Turkey's borders. The coup was stillborn due to the efforts of the MIT, rather than simply failing on its own after being launched.

Although the air and naval forces participated heavily in the coup, the position of the Turkish Land Forces, which constitutes the bulk of the military, remains a mystery to AKP elites. There is still deep concern about a follow-up coup attempt. One unanswered question is why, despite knowledge of an imminent coup attempt, it was the police and members of the public — rather than the rest of the armed forces — who were on the streets trying to stop the F-16s and tanks.

The coup was not an Erdogan plot, but if he succeeds in fully suppressing the takeover attempt, his hold over power will deepen. Mainstream media in Turkey have been instrumental in rallying support for Erdogan. Their unconditional support has prevented anyone from questioning the government’s calls for the public to attend rallies for democracy.

Rushing to judgment, with incomplete information, is dangerous, and given the secretive and evasive nature of the planned coup, there is much crucial information that remains unknown.