Khamenei says Iran has not intervened in Bahrain

Iran’s Supreme Leader Ayatollah Ali Khamenei said that Iran has not intervened in Bahrain and encouraged the island state's leaders to act wisely in order to not turn a political conflict into a civil war. 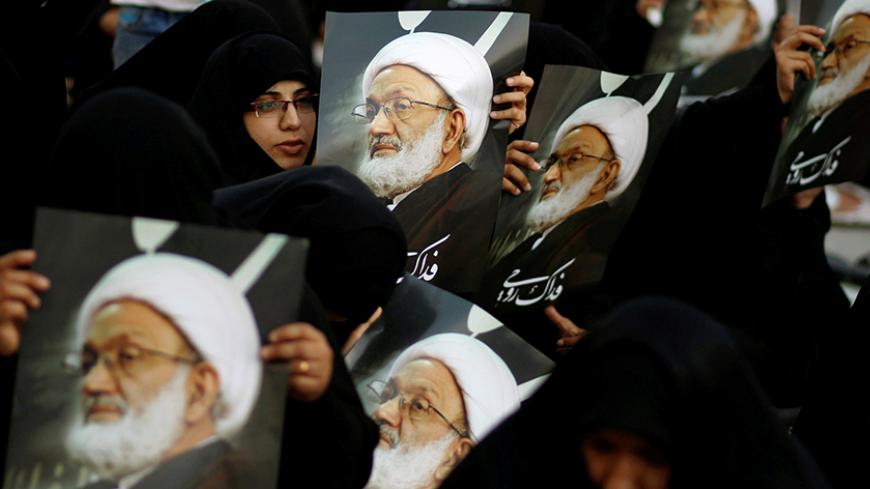 Supporters hold posters of Bahrain's leading Shiite cleric, Isa Qassim, during a sit-in outside his home in the village of Diraz west of Manama, Bahrain, June 21, 2016. - REUTERS/Hamad I Mohammed
Arash Karami
@@@thekarami
July 6, 2016

Speaking to officials of the government July 6, Khamenei discussed the country’s position on Bahrain. “The Islamic Republic of Iran has not interfered in Bahrain,” Khamenei said. “But if there is political awareness and wisdom, they should not allow a political conflict to turn into a civil war, and they should not turn the people against one another.”

Khamenei’s statement follows a rare statement in June by Qasem Soleimani, the head of Iran’s Islamic Revolutionary Guard Corps Quds Force, against the rulers of Bahrain. Soleimani considered that it would be a “red line” if Bahrain follows through on a decision to revoke the citizenship of the country’s top Shiite cleric, Ayatollah Sheikh Isa Qassim, and send forces into his home. A number of other high-ranking military and religious figures also echoed Soleimani’s statement and condemned Bahrain for the decision.

This is not the first time that Khamenei has denied Iran’s military interference in Bahrain. In 2012, just one year after the anti-government protests began in the Persian Gulf country, Khamenei said he hoped “the people of Bahrain would be victorious.” However, Khamenei said claims by Bahrain’s government that the protesters are linked to Iran were a lie, saying, “Wherever Iran interferes, it will directly state it.” Khamenei said that an example of Iran's interference was its military help supporting those fighting Israel and that Iran will continue to support anyone who fights Israel. He said that had Iran intervened militarily in Bahrain, the situation would have been different.

Bahrain first witnessed mass protests in 2011, largely by its Shiite majority population against the Sunni ruling family, which is closely aligned with Saudi Arabia, Iran’s main regional rival. Under a government crackdown, backed by Saudi forces, the protests have died down. Bahrain's announcement that it was going to revoke the citizenship of Qassim has sparked tensions between Iran and Bahrain once again.

During his speech to government officials July 6, Khamenei also blamed the United States for stoking tensions in the region in order to diminish the issue of Palestine. “They want to deny a geography and a nation whereas Palestine has a history of thousands of years and its people are the owners of a land and this reality cannot be denied,” Khamenei said. He added that Palestine is an issue that both Islamic and non-Islamic countries will not ignore.

During prayers for the last day of Ramadan, Khamenei also discussed domestic issues. He called the exorbitant salaries of some government officials that have led to resignations and firings of the heads of banks a sin and a betrayal of the values of the Islamic Revolution. He also said that there was negligence that allowed these officials to receive such high salaries and that their cases must be seriously pursued and not forgotten after the current commotion. Khamenei blamed the issue of high salaries as a result of a “drunken aristocracy, extravagance and luxury” being promoted in society.