Fed up with talk, Iranians demand action on jobs

Three years into his term, Iranian President Hassan Rouhani is running out of time to fulfill his campaign promise of lowering unemployment. 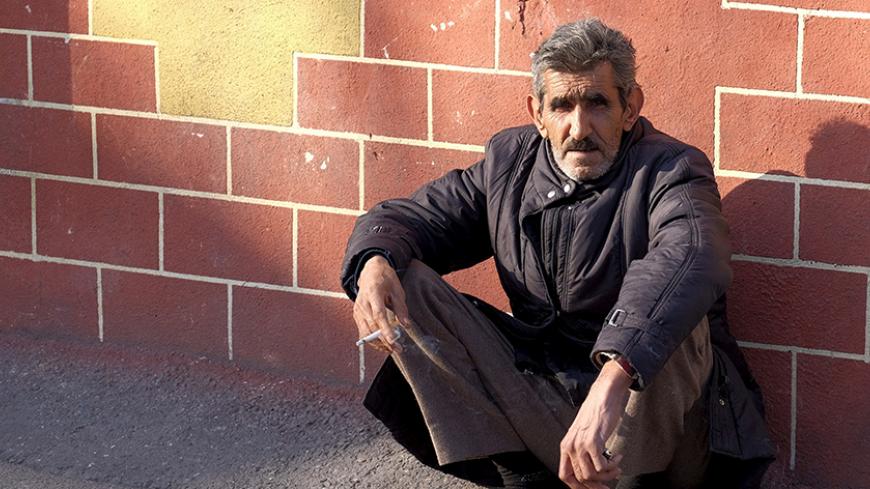 An unemployed man smokes a cigarette as he waits for a job offer on a sidewalk in Tehran, Jan. 20, 2016. - REUTERS/Raheb Homavandi

TEHRAN, Iran — When he took office in August 2013, Iranian President Hassan Rouhani faced an ailing economy, high unemployment and a nuclear standoff with the West.

The Rouhani administration has managed to resolve the nuclear issue, clinching a deal with six world powers in July 2015. It had hoped that the removal of economic sanctions under the Joint Comprehensive Plan of Action would spur investment that would help rebuild the economy and create jobs. But with only a year left of his term, Rouhani continues to face the unresolved challenges of an economy in recession and high unemployment.

Iran’s Supreme Leader Ayatollah Ali Khamenei on June 5 said both of these issues must be among the priorities of the new parliament, urging the legislative and executive branches to work hard to address them. “The issue of the economy is the urgent priority under the country’s current circumstances. … The economic problems, particularly stagnation and unemployment, must be resolved and mere words are of no help,” Khamenei stressed.

The Statistical Center of Iran put the number of Iranians out of work at some 2.5 million in the past Iranian calendar year 1394 (ending March 20, 2016). That figure amounts to 11% of the workforce, and shows a 0.4% increase compared with the previous Iranian year. The data also shows that the unemployment rate that year was 9.3% and 19.4% for men and women, respectively.

There are other figures that indicate that the job crisis could actually be a lot worse. Interior Minister Abdolreza Rahmani Fazli has said the number of jobless Iranians is as high as 3.5 million. He predicts that this figure will balloon, as the country has been forecast an annual economic growth of only between 1.5% and 3% — far short of Rouhani’s target of 5% growth this year. “With that sort of growth, unemployment and inflation will double in the short term. We need foreign investment,” Rahmani Fazli told lawmakers on June 7. Meanwhile, the parliament’s research center has put the number of unemployed, underemployed and those who have given up their search after failing to find employment at a staggering 6.5 million.

The Rouhani administration blames the policies of the previous government for the difficult economic situation it has faced since taking office in 2013. It claims that it has managed to reverse the negative economic growth in past years and reduce the previously high inflation rate to some 10%. The administration also says that job creation tops its agenda and that it sticks to the principles of the “resistance economy” as a way out of the current economic crisis.

Rouhani sniped back on May 31, saying, “Unfortunately, job creation was zero in past years before the [current] government. But it has now turned positive and we are seeking to create 1 million jobs annually.” As the administration pursues its plan to create new jobs, criticism over its handling of the economy in general and unemployment in particular has mounted — even following the removal of sanctions back in January.

Labor market commentators such as Faramarz Tofiqi believe that the Rouhani administration has not translated its words into action, and that there has been no positive change in the labor market. Tofiqi told Fars News Agency on June 8 that “immediate decisions to pull the country out of the current economic crisis and paying workers what they deserve are some of ways to tackle unemployment.”

As part of its efforts to boost job creation, the Rouhani administration has allocated more than $4.5 billion to revive 7,500 stagnant and semi-active production units across the country during the current Iranian year. Meanwhile, the administration is working to make sure that 500,000 positions are maintained this year, while expanding cooperation at the international level to take on unemployment.

In addition, the administration has unveiled a national plan that seeks inclusive job creation and aims to promote economic and social justice. Deputy Minister of Labor, Cooperation and Welfare Isa Mansouri has said that the Supreme Council of Employment is focusing its policies on macro-level plans that synchronize economic growth with job creation and poverty alleviation.

These plans include two packages. According to Mansouri, the first package was implemented last year in small towns. Under this plan, unskilled labor entered the job market after technical training, while those already employed improved their skill set to continue in their positions. The second package focuses on, among other things, localization — promoting the top 20 activities that account for 80% of total employment in each province — rather than mere allocation of money to job creation.

The Rouhani administration’s plan to create new jobs is especially focused on tourism, information and communications technology, the environment and the energy sector.

While the administration says that its jobs packages will reduce the unemployment rate over the current Iranian year, critics have expressed doubt, saying that these initiatives are not enough. Labor market analyst Hamid Hajj Esmaili told Mehr News Agency that the measures taken by the administration over the past three years have not been sufficient to reduce unemployment. “Last year’s economic growth — which came from oil revenue rather than private sector activity — was low. If gross domestic product [growth] is attained through activities by the private sector and cooperative enterprises rather than the government sector, then employment will be boosted,” Esmaili said.

The administration has furthermore stated that it will reduce the unemployment rate to single digits by the end of its term next summer — an objective some experts call unrealistic, arguing that more time will be needed.

But whether the number of the jobless is 2.5 or 3.5 million, as officially stated — or even as high as 10 million, according to unofficial estimates — it is clear that the Rouhani administration has its work cut out for it in the coming months. If anything, fulfilling his campaign promise of reducing unemployment, especially among the youth and college graduates, could be Rouhani’s ticket to re-election next year.