Will Rouhani be able to weather jobs crisis?

Despite a drastic cut in its "misery index" and the signing of the nuclear deal, Iran remains plagued by stubborn joblessness. 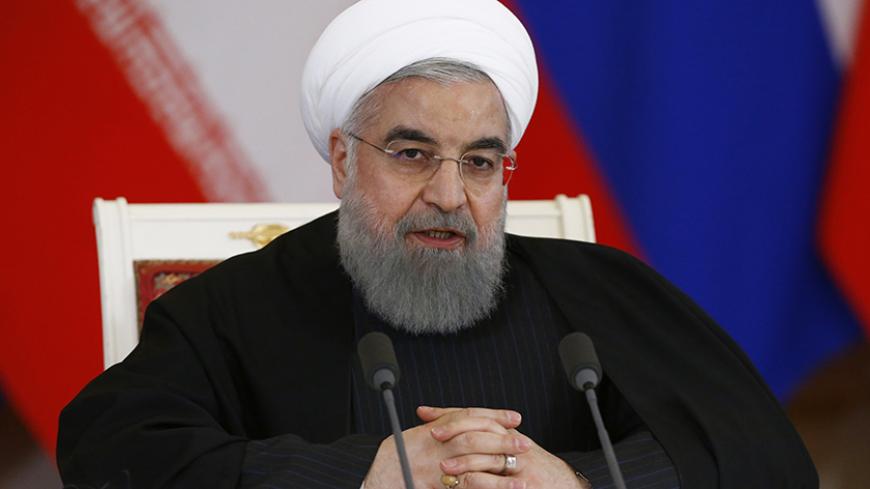 Reza holds a degree in management but has since his graduation in 2011 failed to find a steady job. The 31-year-old, who lives in Tehran, has been driving the family’s car as an unlicensed cab to make ends meet. Recently, he came up with the idea of borrowing some money to buy an official taxi vehicle, but at the last minute realized that he had to be married to be eligible to become a cab driver. “In my struggle to have a reliable source of income, I even thought of marriage. But I thought to myself that my situation could even get worse, so I gave up the idea of having a taxi,” Reza told Al-Monitor on condition his surname not be published. “I just wish there is a way out. I’m so desperate for a proper job.”

The operation of private vehicles as unlicensed cabs has become a career for many in overcrowded Tehran over the last decade, including retirees who look for extra income and young people who can’t find permanent jobs. “I know many people who are in the same situation as I am,” Reza said.

The administration of President Hassan Rouhani managed to create 630,000 new jobs in the Iranian fiscal year that ended March 20. Yet these efforts are clearly insufficient as joblessness hit 12.4% in the same year, 1.9 percentage points higher than three years ago, according to the latest data released by the Statistical Center of Iran. Officials argue that the hike in unemployment is due to a rising demand for jobs. The population boom of the 1980s — 21 million babies were born between 1980 and 1988 — has now created a need for the government to generate more jobs — an expensive endeavor that requires huge investment.

Rouhani acknowledged in a March 30 speech in Gilan province that unemployment has been a “heavy burden” on his administration, noting that nearly 1.2 million young people will be joining the job market annually in the next few years. Rouhani’s team has been able to generate only a maximum of 700,000 jobs per year. Indeed, Vice President Eshaq Jahangiri on April 15 labeled the unemployment crisis in the country as a “super challenge.”

The International Monetary Fund forecast in its latest report on Iran that unemployment will remain high at 12.5% in 2017 and 2018. The economy grew 11.4% in the first Iranian fiscal year following the Jan. 16, 2016, implementation of the Joint Comprehensive Plan of Action. However, this growth has been mainly due to a jump in oil exports. As such, it has had little impact on the job market. Given the IMF’s forecast of a growth in Iran of just 3.3% in 2017 and 4.3% in 2018, it is not likely that the situation will get better for Iranian job seekers in the coming years.

Rouhani has underlined that the creation of sustainable jobs needs huge investments. In this vein, economists have pointed out that the government should help improve the business environment and stabilize financial markets to generate such opportunities. But to that end, the government has to optimize domestic investment while also increasing foreign direct investment, Ali Sarzaeem, a lecturer at Allameh Tabatabai University, said in an address to an economic seminar in January. Further complicating the situation, the low rate of productivity in Iran is believed to increase the investment rate for job creation, though there is no official report on this issue. Despite the absence of relevant reports authored by experts, some presidential candidates have claimed that they would drastically cut the unemployment rate should they be elected May 19.

Mohammad Bagher Ghalibaf, Tehran’s conservative mayor, told reporters April 26 that he would create 5 million jobs in four years if he wins the presidential vote. Majid Abhari, a sociologist and advocate for the mayor, said the promise is feasible if the cost of creating a permanent job is cut to 1 billion rials ($30,827) or less. Media reports suggest that the government invests some 3 billion rials ($92,481) to create a sustainable job in the manufacturing sector. Others say the figure is estimated at 26 billion rials ($801,504) for each job created in the petrochemical industry.

Undoubtedly, Rouhani’s performance on job creation is among the core issues that his conservative opponents are highlighting in the short time before the elections. Given the sheer size of the young generation in the country, the moderate president should be seriously concerned about the sniping over unemployment. In this vein, making use of the development of the “misery index” during his current presidential term could be a way for Rouhani to fight back.

The “misery index,” a combination of unemployment and inflation, dropped to 19.2% in March, down from 45.5% in June 2013, according to the Statistical Center of Iran. This drop clearly indicates that things have been improving. Yet most Iranians say they have not felt the improvement. Thus, Rouhani needs to come up with tangible solutions for the country's unemployment in the coming days to try convince millions of young people that higher investment in the coming years will boost employment in non-energy aspects of the Iranian economy, including the construction sector. If not, he may very well be on the receiving end of voter frustration over the stubborn unemployment in the country.