While many young Iranians are now college graduates, many lack the technical and practical work experience to land a job. 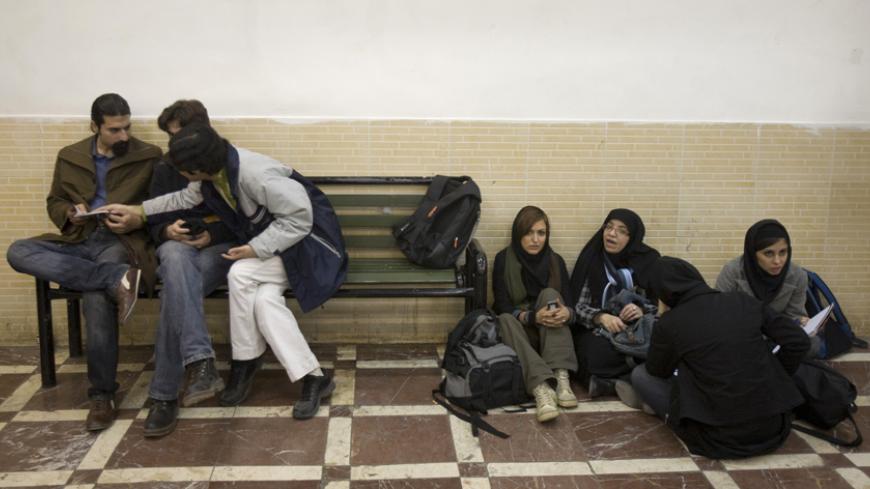 Students rest at a university while waiting for a final exam in Tehran, Jan. 18, 2009. - REUTERS/Morteza Nikoubazl

The state of the economy has long been a dominant factor in shaping Iran's political evolution since the country's 1979 Islamic revolution. Now, more than a year and half into Hassan Rouhani’s presidency, his government is missing billions of dollars in lost revenues as Iran’s oil-driven economy suffers from the price of crude's tumble to half its value since last June.

Rouhani swept to power in 2013 with campaign pledges to solve the Islamic Republic’s high unemployment and inflation and bring prosperity to the country. So far, some of the economic damage caused by what has largely been described as mismanagement by the previous administration as well as international sanctions has been recovered. Stabilizing the national currency and implementing conservative monetary and fiscal policies have halved the official annual inflation rate to less than 20%, down from nearly 40% during President Mahmoud Ahmadinejad’s tenure.

In addition, re-engaging with the international community and ending years of sanctions have been among Rouhani’s tools to combat these issues. Rouhani said in a June 2014 press conference, “One way to resolve unemployment is to reach a deal in nuclear negotiations. Because when the sanctions are lifted, investments will flow to our country.” The Tehran Chamber of Commerce, Industries, Mines and Agriculture recently suggested that Iran could absorb $500 billion in foreign investments once the sanctions are fully lifted.

A diplomatic push led by Foreign Minister Mohammad Javad Zarif has so far resulted in a limited easing of sanctions under the interim deal reached over Tehran’s nuclear program.

But all this has not been enough to get Iran the investments needed to revive the economy and create jobs. Despite the limited improvements, rising unemployment remains among the top economic challenges facing the pragmatic president. The latest report by the Statistical Center of Iran indicates that the country’s unemployment rate during fall 2014 increased just 1% to 10.5% from 9.5% in summer. For Iran, with one of the youngest populations in the world, the unemployment situation has become what First Vice President Es’haq Jahangiri has called “critical.”

According to official figures, over 2.5 million members of the Iranian workforce are currently without jobs.

Sajjad Sadeqi, a 28-year-old graduate from one of Tehran's more prestigious universities, has been looking for a job since his graduation in summer. He asked, "Everywhere I go, they ask for previous related work experience. How can a new graduate have work experience?"

Ali Rabi’ee, the minister of Cooperative, Labor and Welfare, believes youth unemployment will be soon exacerbated as some 5 million people are expected to join the club in the next seven years, bringing the total number of potential jobless people to 7.5 million.

A business analyst based in Tehran's Grand Bazaar told Al-Monitor that the impending demographic shift of Iran’s baby boomer generation — those born after the 1979 revolution — is beginning to take shape on the current job landscape.

The analyst, who asked that his name not be disclosed, said, “It is ironic, as many of these fully qualified youths from the post-revolution generation came out of college expecting to land full-time jobs, but they are not as dynamic as the generation before them." He added, “Many of these so-called qualified young graduates haven't been given the skills to create their own enterprises and only wish to work for foreign companies."

Iran’s population has more than doubled since the 1979 revolution, but the number of university students in the country has increased more than 25 times to over 4.5 million.

Many of those without a job are college graduates like 26-year-old Elham, who has just quit working as a secretary in a private company. Elham told Al-Monitor, "I have studied very hard to get my master’s degree in history. How can I hold my head up in front of my family and friends by working as a secretary?"

The unwillingness of many Iranian youths to take certain jobs has opened opportunities to foreign immigrants.

Ahmad is a young Afghan immigrant working as a construction worker in Tehran. "I've been working here for five years now. Finding a job isn't that hard because most young Iranians are not willing to do the manual work that I do," Ahmad said.

Amin Shakeri, an entrepreneurial activist, told Al-Monitor, “Each year, a large number of college students graduate, but when they start looking for jobs, they don’t find themselves welcomed anywhere. Most of the education students are given in universities is non-applicable, nor do they attain any specific skills. These issues have aggravated the unemployment situation in Iran.”

"Most young people who're applying to work with us don't even have the basic skills of working," said Reza Eslami, a senior manager at a private company in Tehran. Eslami, who is in charge of hiring new staff for its IT department, stressed, "For some, all they've got is a college degree in their hands with literally no practical knowledge of teamwork or other needed skills. I prefer to hire a skilled person and pay a higher salary, even if they don't have a college degree."

Iran just celebrated the 36th anniversary of its revolution on Feb. 11. The government says 400,000 new jobs were created during the first six months of the current Persian calendar year, which started on March 21. That is barely half of the new job opportunities that officials say are needed each year to handle the unemployment crisis.

Looking to many developed countries for an example, Shakeri said, “The government must support the development of technical and vocational training, as training skilled manpower is key to economic development.”