The Rouhani administration has unveiled a comprehensive employment plan in a bid to realize the president’s campaign promises, but it is unclear whether the envisioned job creation will materialize given the obstacles that remain unaddressed. 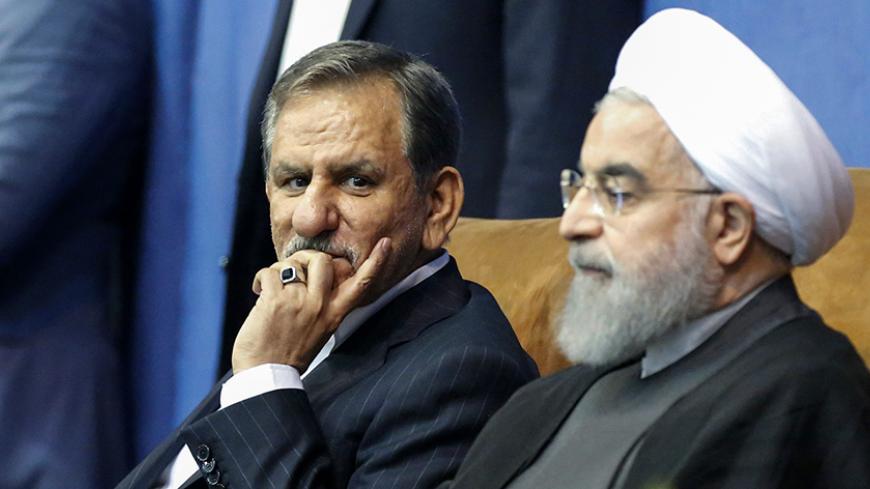 Iran’s First Vice President Eshaq Jahangiri, who also serves as head of the Resistance Economy Command Headquarters, last month unveiled a comprehensive employment plan that envisions the creation of 971,700 jobs by the end of the current Iranian year (March 20, 2018). This target could be achieved if the allocated 215 trillion rials ($6.6 billion) in credit is secured, and most importantly, if the cost of job creation is significantly cut. Meanwhile, the plan is silent on the ample red tape that must be removed for unemployment to decrease.

The latest data released by the Statistical Center of Iran (SCI) put the national unemployment rate for the first (spring) quarter at 12.6% — 0.4% higher than the same period last year. Labor Minister Ali Rabiei on May 18 warned that unemployment will remain high for the next several years as long as the pace of the development of small businesses remains slow. Of note, the energy sector was the main recipient of investment in the last Iranian calendar year, which ended March 20, without creating a significant number of jobs.

Indeed, SCI data show that only 615,000 jobs were created in the last Iranian calendar year. This was even though gross domestic product (GDP) grew by a staggering 12.5% during the same period due to sanctions relief under the nuclear deal, according to a primary report by the Central Bank. The high GDP growth in the previous Iranian year is mainly attributed to the development of the oil, gas and petrochemical sectors, which experts say create relatively few jobs at a very high cost.

Iran needs to create about 1 million jobs per year to achieve single digit unemployment by 2022. Yet officials hope that employment figures will improve this year following the government’s new approach of backing small- and medium-sized businesses as well as science-based companies across the country. The new approach may help cut the cost of job creation. If successful, the economy will potentially create more jobs for every percentage point of growth in GDP compared to the previous year.

Under the new employment plan, the cost of creating a permanent job has been estimated at 200 million rials ($6,100) on average. The figure is much lower than the $92,000 that the government had arguably invested in the past to generate a single sustainable job in the manufacturing sector. Under the new plan, the government will have to create 254,000 jobs in the industry, mining and trade sectors by year end. This figure accounts for only 26% of the total jobs to be generated, as cited by leading economic newspaper Donya-e Eqtesad June 29. Yet to create that number of jobs in the industrial sector, the government needs around $22 billion in investment based on media reports on the cost of job creation. This figure is over three times more than the total allocated credit in the employment plan. Nonetheless, the 53 experts who worked together to prepare the initiative believe that the allocated credit is sufficient as the bulk of jobs are seen as being created by small- and medium-sized enterprises.

Apart from concerns that the plan’s figures are not realistic, one can raise questions about the capability of Iranian banks to actually provide the allocated credit. Indeed, banks are set to provide 93% of the required credit, while the national budget and the National Development Fund are expected to only provide 2.3% and 4.6%, respectively. It is not clear how banks would be able to cope with the possibility of insufficient liquidity, given that their total debt to the Central Bank increased by 19.2% in the last Iranian year, to 996 trillion rials ($30.5 billion). A credit crunch is already affecting businesses across the country, as lenders have been dealing with accumulated nonperforming loans, huge toxic assets and hefty government debts.

Another issue of concern is the excessive red tape, which has been ignored in the government’s employment plan. Hamid Deihim, an economist at the University of Tehran, sees the red tape as a major obstacle that has made investors give up on enterprising. The World Bank’s Doing Business index for Iran got worse in 2017, dropping to 120 from 117 the year before. The index for Starting a Business also fell five units, reaching 102 in 2017. It takes Iranian applicants several weeks to have a company registered, disregarding the potential need for additional licenses from relevant organizations and ministries. This process takes only a few days in the United States and Europe, where applicants are free to have home offices. In Iran, applicants have to rent an office before starting their business, and therefore have to pay extra expenses for the establishment of a new enterprise.

Emad Azimi, the head of the Research Department at the Management and Planning Organization’s branch in Markazi province, in a May 28 op-ed in Donya-e Eqtesad urged the government to eliminate parallel and conflicting regulations when it comes to starting a new business. He said that employment can only be boosted if regulations are eased. However, measures to ease doing business in the country is a dream that can only become a reality in the distant future. As Rabiei has noted, single-digit unemployment rates require a “long-term” comprehensive solution that involves political and economic stability, elimination of red tape, eradication of economic rents and rent-seeking behavior, a skillful workforce and required investment. Thus, unemployment will in all probability continue to remain a source of concern for the authorities — until and unless the government provides a transparent competitive business environment for the real private sector to get the economy going.