Former President Mahmoud Ahmadinejad’s plans to create jobs by subsidizing projects with small and medium-sized enterprises were a failure, leaving the new president to pick up the slack. 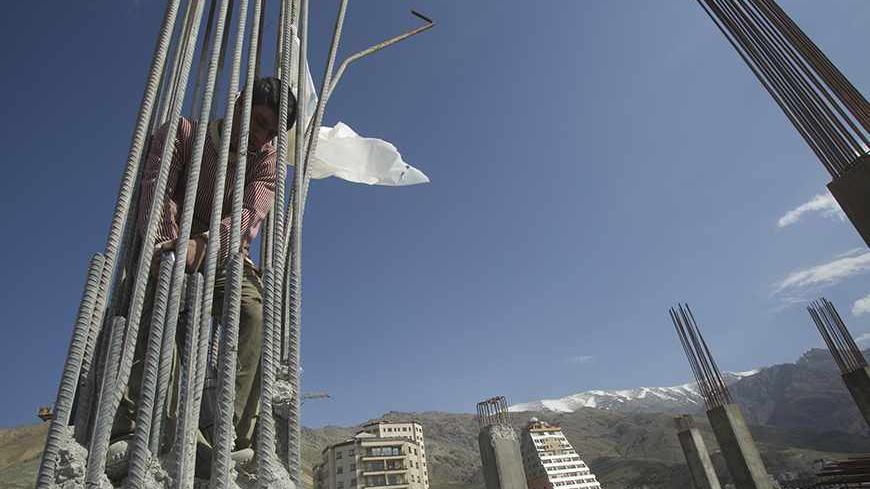 A construction worker uses a jackhammer to remove support pillars for the final floor of a high-rise building in north Tehran, April 15, 2010. - REUTERS/Caren Firouz

Iran has been struggling with a major unemployment challenge for the last two decades. Various governments have come up with schemes and initiatives to tackle it, but in most cases without tangible or sustainable results. One of the remedies that the government of former President Mahmoud Ahmadinejad developed was to extend loans to businesses to create rapid job opportunities including loans for so-called “self-employment schemes.” In retrospect, it's clear that the scheme was a major failure, especially as the net employment effect was close to zero. One reason for the failure was the fact that many existing companies developed a scheme to secure cheap loans from the government by making their employees redundant and then re-employing them with the actual loan promised by the government. Furthermore, most of the new ventures that were set up with the financial support of this scheme faced financial or operational bottlenecks and were never finalized.

According to a 2012 report by the Central Bank of Iran, in the first five years of the existence of the “self-employment loans,” Iranian banks covered some 93% of the capital needed for such job creation schemes. However, a large number of such projects were never completed. Consequently, the current administration is faced with the staggering number of 50,000 small and medium-sized enterprises left unfinished. It should also be noted that a significant segment of the government’s debt to the country’s banks consists of such loans, which were extended based on government instructions as well as debt relating to cash handout payments within the subsidy reforms.

Presently, President Hassan Rouhani's government needs to both settle the old debts to the banks and also decide how to approach the unfinished projects. According to Ali Akbar Labbafi, former deputy minister of Cooperatives, Labor and Social Affairs, these 50,000 business units would require an investment of 500,000 billion rials ($20 billion) to be completed, with the potential of creating up to 700,000 new jobs.

In fact, one of the priorities of the new administration is to utilize the existing and unfinished opportunities in the economy to create jobs. However, resuscitating these businesses also requires that capable entrepreneurs translate the unfinished units into complete businesses and then start making money to repay the original loans and other facilities. For example, in the fiscal year 1391 (which ended March 20, 2013), the government had allocated 650,000 billion rials ($26 billion) for investment in unfinished projects and businesses. However, there was no tangible outcome in terms of new employment or completed projects.

Interestingly, according to the Ministry of Cooperatives, Labor and Social Affairs, the 50,000 unfinished businesses include 31% of all loan applications for new ventures, 10% of applications related to business expansion and 9% of those that applied for working capital loans. It is unclear how many of these cases are the result of corruption among loan applicants and state officials and how many are genuine victims of legal fluctuations or other business risks. Nonetheless, what is clear is that through an appropriate approach to these cases, the government could generate needed jobs in the Iranian economy.

However, the above challenge is one of many that require government funds. Another huge task is the final decision on the Mehr housing project, another failed scheme introduced by the Ahmadinejad government. Even though the new administration has decided to discontinue the project, it will still have to invest in some of the unfinished construction projects, especially as low to medium-income families have invested their life savings in the projects with the hope of becoming homeowners. In an Oct. 30 cabinet meeting, Rouhani instructed all government agencies to put effort behind completing the unfinished housing projects, and to inform society about the inflationary impact of the Mehr project, which would justify the eventual discontinuation of the program.

Evidently, the phenomenon of unfinished projects was not exclusive to the Ahmadinejad government. Generally, projects that rely on government resources and decision-making have always been subject to corrupt dealings, political decisions and project mismanagement. However, the volume of unfinished projects in the fields of public investments, housing and extended loan facilities to the nongovernmental sector has reached a level that makes it impossible for the government to set efficient priorities across diverse sectors and regions. Therefore, experts agree that the best approach would be to decentralize the decisions on unfinished projects and to empower the regions to decide where to invest new funds.

This approach would also mesh well with the government’s overall objective to decentralize political and economic decisions in Iran. However, this approach would have to be fully aligned with the recent decision by the government to revive the Management and Planning Organization, which would represent a central entity that will draft, implement and supervise state and regional budgets.