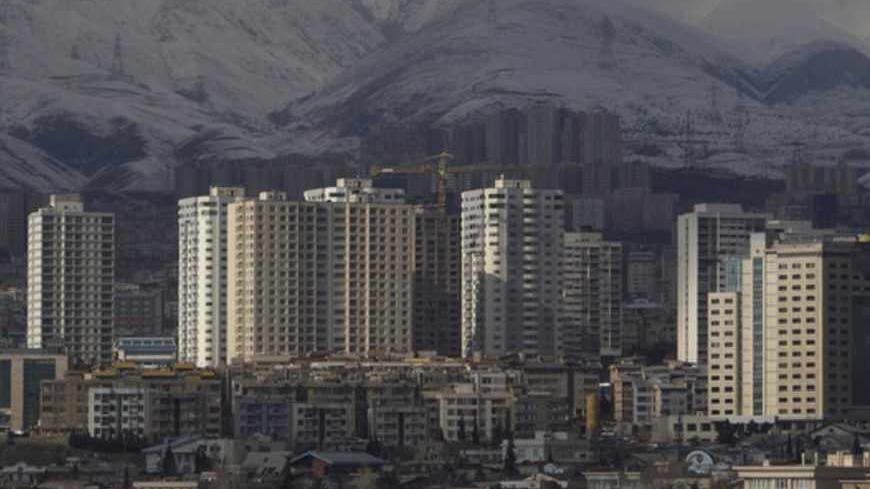 A general view of housing complexes in northwestern Tehran on a clear day, Feb. 12, 2011. - REUTERS/Morteza Nikoubazl

The election of Hassan Rouhani as Iran’s new president has generated a lot of enthusiasm among Iranian society and the business elite. The significant drop in the value of the US dollar on the country’s free currency market is the surest sign that Rouhani’s victory has created a positive momentum. It remains to be seen whether the new government will manage to use it to tackle some of the urgent social and economic issues in the country. While many are focusing on basic issues such as inflation, unemployment and sanctions, society is facing another challenge that is not receiving enough attention: housing.

Iran's housing sector had been accustomed to ups and downs connected to investment cycles in the country. However, a number of factors have led to an unprecedented upheaval in Iranian housing, and the Rouhani government will need to develop a workable strategy to return the sector to a degree of normalcy.

To understand the current imbalances in the housing sector, one needs to look back at how the events of the past few years changed its dynamics. Prior to the President Mahmoud Ahmadinejad administration, most of the investment in housing came from the country's private sector. Small to medium investors would mainly construct new residential units, which, under normal circumstances, had been a profitable business. This meant that there was always enough interest from capital investors to engage this sector. Even banks and state companies that were not mandated with constructing housing entered this sector as it offered above-average rates of return. Occasional imbalances in the market were usually corrected through market forces, and the supply and demand would find a new equilibrium after short periods of uncertainty.

However, three hiccups during the Ahmadinejad years led to a lasting crisis in the market. Before discussing the market disruptions, it should be noted that in the period between June 2005 (Ahmadinejad's first election) and June 2012 (the latest available data), land prices in urban areas grew by 81%, but the price of housing units increased by 220%. Furthermore, the cost of renting an average flat in urban areas rose by 254% in the same period. The demand for housing units grew much faster than the demand for land — usually an investment tool for many investors. In other words, the country as a whole is facing a lack of appropriate housing units, an issue that is directly related to three key phenomena that emerged during the Ahmadinejad administration.

First, external banking sanctions, especially the closure of Iranian accounts outside the country, led to a massive repatriation of funds from foreign banks, most of which flowed into the housing and property market. As a result, there was a considerable price increase in 2008 and 2009 and a bubble that misled the usual market players. On the one hand, there was over-investment in luxury housing units in larger cities, some of which are still empty because there is no demand for them. On the other hand, the unrealistically high property prices suppressed the real demand in the market, shifting traditional buyers toward rentals.

Second, the Ahmadinejad government's attempts to provide housing — the so-called Mehr Housing Units — generated the wrong signals in the market. By promising cheap housing to the lower-income classes, the government absorbed some of the private capital that would normally have gone into constructing new private housing units. However, the government failed to deliver the housing units that it had promised, leading many lower-middle class and lower-income families to feel cheated. The "Mehr scheme" also absorbed a large segment of the loan facilities of the country’s Housing Bank, which would under normal circumstances have been extended to middle-class families as mortgages and house-construction facilities.

Third, political and legal uncertainties led to major disruptions. At one point, the government spread the rumor that all individuals who owned a second housing unit would be taxed heavily. This and similar baseless policy ideas discouraged traditional housing investors, and they started shifting their capital to unproductive investments such as gold coins and hard currency. Furthermore, Ahmadinejad’s occasional outbursts — such as when he claimed that the government could give 1,000 sqare meters of land to every Iranian family — irritated the market and society. The situation was further agitated by the subsidy reforms which made construction materials and consequently housing units more expensive — in itself another obstacle to the normal flow of private investment in the housing sector.

Finally, the sudden depreciation of the Iranian rial in 2012 also changed the dynamics in the housing market, generating uncertainty about future investments in the sector.

The government’s reply can be captured in its attempts to regulate the market prices, especially rent levels, but in the words of one expert, “All such regulating mechanisms are always doomed to fail!”

The result of all the above phenomena has been an undersupply of appropriate housing units, especially in urban areas. The main social group hit by the undersupply is the urban middle class — exactly the same social group that put its weight behind Hassan Rouhani.

Therefore, the next government will have to address this bottleneck efficiently by attending to the following issues:

While the challenge in the housing sector is significant, resolving it seems not to be too difficult. The new government will have to reverse the Ahmadinejad policy of interfering in the housing sector and leave it to small and medium-sized private players who could re-establish a new equilibrium in the market. In the meantime, the government will have to adjust real income levels of average families and reform banking regulations to assist families in their desire to own their homes.