Excess liquidity in search of higher returns may be causing turmoil in Iran’s foreign exchange, property and gold coin markets, but the money is primed to positively impact capital markets. 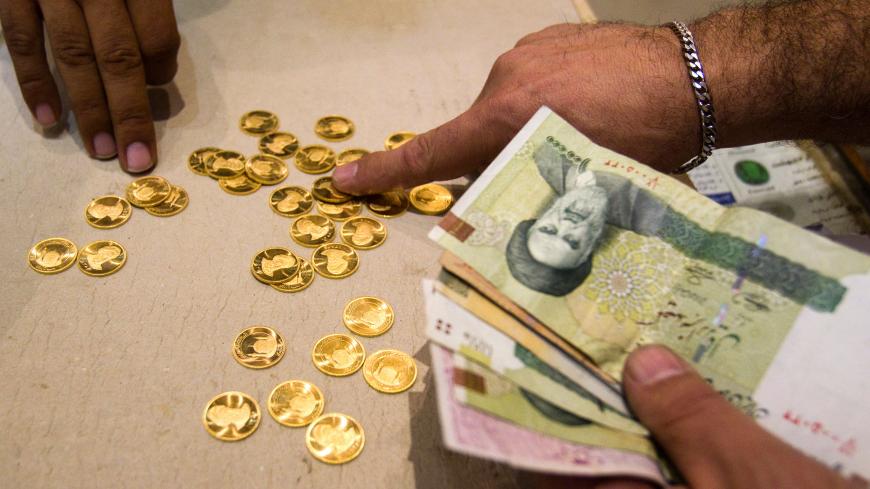 The money supply in the Iranian economy exceeds $355 billion at the official exchange rate, remarkably surpassing total economic output of $331 billion. Financial depth, a metric showing the ratio of liquidity to gross domestic product, is commonly indicative of the state of a given economy. But financial depth can be too high; the rapid growth of this ratio in Iran, which has seen it triple under the administration of President Hassan Rouhani, is now posing a threat to the overall economic health of the country.

Weak monetary, fiscal and exchange rate policies in recent years coupled with the payment of high interest rates to Iranian bank depositors have all acted to cause the liquidity rate to spike to levels that have spurred dramatic growth in asset markets such as hard currency, gold coins and real estate. Iranian stock exchanges have been the only markets that have been neglected by investors, even as the fundamentals in the Tehran Stock Exchange tell of rosy days to come.

The interest rate cut by the Central Bank of Iran in September amid President Donald Trump's repeated threats to withdraw from the nuclear deal — which he effectuated May 8 — are among the catalysts that contributed to further turbulence in the foreign exchange and gold coin markets in Iran.

But as gold coin prices keep hitting new highs, experts say valuations are deviating deeply away from intrinsic values and thus indicating the formation of a bubble. For instance, the US dollar exchange rate, which is commonly applied to calculate the value of gold coins, is priced at a premium far above the rate of the greenback on the now blacklisted “free” market. While the US dollar trades for around 71,000 rials in the unofficial market, gold coins are sold for around 25 million rials. In this valuation, the dollar is calculated at a rate of 75,000 rials. This amounts to $352 at the first rate, and $333 at the second, but $565 at the official rate. This shows that investors have turned to the gold market as a safe haven to preserve the value of their money in the absence of a functioning “free” foreign exchange market due to severe penalties imposed by the authorities on both sellers and buyers.

Real estate is another asset market that has been massively susceptible to speculative activities in recent months. In April, the average price per square meter of residential units in Tehran hovered around 55.3 million rials ($1,251 at the official exchange rate, or $116 per square foot), up by over 20% in rial terms compared with the corresponding month a year ago. Half of the nominal rise in housing prices since 2013 has occurred over the past six months alone.

This has led to a significant drop in the purchasing power of those who want to purchase property to live in, such as the Iranian middle class and lower-income groups. As such, burgeoning real estate prices are largely explained by speculative investments rather than as a result of non-investor demand. Under the current circumstances, experts anticipate heavy stagflation ahead for real estate due to the nature of its prosperity cycles, which are fairly short-lived. When prices embark on an ascending trajectory and market panic accelerates, investors hardly find the opportunity to exit the market at desired rates of sale. Hence, the demand side is not sustainable.

Furthermore, in recent weeks and months, the unofficial foreign currency and gold markets have brought huge windfalls to their stakeholders. This considerable return has been in relative alignment with current risks in the Iranian economy. Nonetheless, the Tehran Stock Exchange, while having risen amid the rial depreciation, has yet to see the full fruits of the currency devaluation and excess liquidity.

Indeed, Iranian capital markets are now the logical destination for the huge amount of liquidity in the economy. This could be positive since listed firms with sound book balances could gain further access to financing, thus ultimately enhancing gross domestic product. In this context, export-oriented companies are particularly well positioned to benefit, mindful of the increased competitive edge provided by a cheaper rial. The fact that such enterprises comprise over 50% of the market value of Iranian stock markets denotes that foreign exchange rate fluctuations exert a direct and positive impact on the Tehran Stock Exchange’s performance. These dynamics were particularly evident during the presidency of Mahmoud Ahmadinejad (2005-13) when Iran came under stringent sanctions over its nuclear program. Over 2012-14, the stock market index surpassed historical levels, and in the Iranian year 1392 (March 21, 2013, to March 20, 2014), the average return of Tehran Stock Exchange benchmark mounted to 107%. Conversely, equities have not shown a strong bullish trend as the rial’s value stabilized and strengthened as Rouhani first took office as president in 2013.

Thus, current conditions are identical to the final years of the Ahmadinejad epoch (2005-13) in many respects, and especially in regard to inflationary expectations resulting from the rial’s devaluation. For this reason, the Tehran Stock Exchange is destined to continue to climb.

Ultimately, while the real estate, gold coin and unofficial foreign exchange markets may be surging in Iran, the extent of these bull runs are far from clear, thus positioning Iran’s capital markets to be set to absorb badly needed finance. In this equation, the anxieties shifting liquidity from bank deposit certificates and other static assets toward capital markets may paradoxically end up strengthening the Iranian economy.