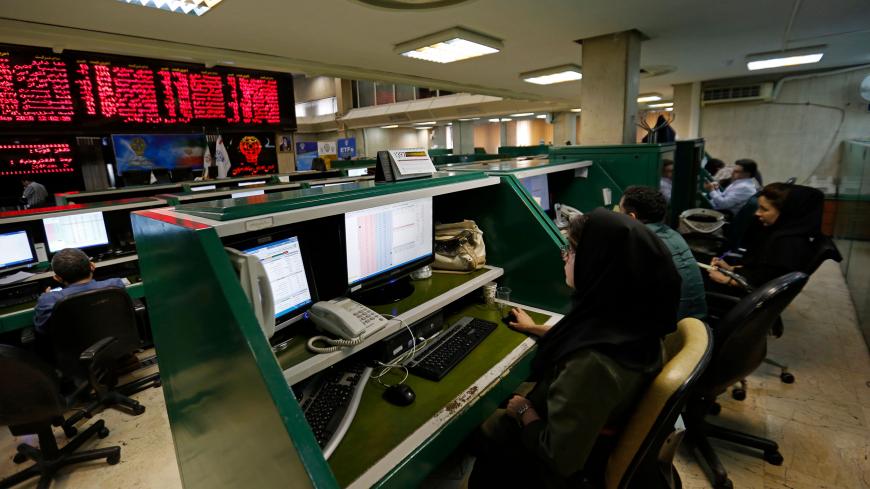 The benchmark Tehran Stock Exchange index managed to break above its all-time highs just before the Iranian fiscal year ended March 19. The annual total return reached a whopping 187%, registering the highest annual growth in the exchange's existence. Interestingly, the equal-weighted index, the barometer applied to measure the performance of micro-size listed companies, rocketed up during the same period by 437%. This all occurred at the same time that the activity of firms faced macroeconomic risks due to major setbacks facing the overall Iranian economy.

The TSE's trend is set to continue in the current fiscal year despite the downward effects of the coronavirus outbreak. However, the stock market may not enjoy the luxury of climbing as much.

While this record performance may seem at odds with the country’s dire economic situation — they are in fact somewhat related, as a budget deficit pushes the government to print money and this causes the liquidity to grow more rapidly.

A key factor behind a prediction that the benchmark is poised to increase again this year is the government's staggering budget deficit in the current financial year. Although the budget has not been approved yet, it is expected to experience a deficit of at least 1.31 trillion rials, or $9.5 billion at the NIMA rate, an online exchange rate platform run by the Central Bank of Iran. What is obvious is that the government won't be able to collect much of its budgeted income, including tax revenues, under the current circumstances of the Iranian economy.

Meanwhile, the volume and value of Iran's oil sales have fallen sharply due to US sanctions and the coronavirus crisis. Therefore, the government has no alternative but to resort to measures such as increasing the monetary base to offset the deficit, leading to a spike in inflation. And while this is unfortunate for Iran's weak economy, it prepares the ground for stock prices to climb yet more. Since even if the volume of sales might tend to decrease, inflationary pressures would make up for the loss as they sell the same product in higher prices. Consequently, the net income margin would stay in the green thanks to a rise in consumer price index.

Another underlying factor that can undoubtedly help the stock market rally is the gradual rise in the value of the US dollar against the Iranian rial. The dollar has already begun to strengthen again after a period of relative stability and currently is being traded at 16,620 rials on the free market. Dollar price growth against the rial has always been a strong driver for the stock exchange's main index. In the past two years, as recession hung over the Iranian economy, the devaluation of the rial massively contributed to the index's record jumps, as inflationary expectations were not duly anchored. Thus, provided that there is no political agreement in 2020 between Iran and the administration of US President Donald Trump — whose tendency has been to continue to impose new sanctions, not lift them — the dollar is expected to skyrocket and touch new, worrying levels.

Of note, Iran's economic growth has been around 0% and minus 7.6%  with and without oil sales, respectively, over the first three quarters of 2019-2020 according to the report published Feb. 9 by Statistical Center of Iran. Liquidity has also surpassed the yearly average of being 25% to above 28% in the same period. All this indicates the fact that the dollar price is poised to overshoot and contribute to rate of inflation. A jump in the dollar's value against the rial could help Iranian export companies sell their products for more when the price is converted to rials and offset global price declines in the wake of the coronavirus outbreak. It could also help domestic companies maintain their competitive advantages against foreign peers.

However some experts believe the benchmark index won't reach new milestones this year. They cite the staggering growth of some penny stocks combined with lower commodity prices on world markets. There is no doubt that some companies have had wild runs, mostly on the back of speculative activities and the ignorance of new Iranian retail investors. Given the rising dollar, big commodity-based companies' share prices are expected to move up despite the downward trend of their markets worldwide.

Meanwhile, absent strong parallel markets capable of competing with the stock exchange at present, excess liquidity has nowhere else to turn.

Additionally, the government is betting heavily on the stock market to bridge its budget deficit. Even if the Iran’s central bank manages to control the dollar’s volatility — which, as mentioned above, seems unlikely — this year could still be deemed a good one for the stock exchange. The government has used the capital market boom over the past two years to offset excess liquidity and divert it from massively defecting to parallel markets. In the same vein, President Hassan Rouhani’s government intends to offer its extra state properties on the stock market this year. It is set to sell assets worth 500 trillion rials ($3.7 billion), an elevenfold increase compared with the preceding year. This indicates that the government is bent on financing its budget deficit through the stock exchange, which gives special importance to the exchange’s prosperity.

Last but not least has been the capital raised through the revaluation of assets conducted by some members of the stock exchange, leading to upward movement and coincidentally lifting the exchange index in the preceding year. This can be the case in the current year as well. There are still big names in steel and petrochemicals that haven’t used this mechanism in recent decades and are intrigued to follow suit. Rising inflation has increased the value of assets such as land, equipment and machinery owned by the listed firms and particularly the big name ones. And now that it has become extremely difficult to make new investments, revaluation of assets has attracted the retail investors' attention to a large degree to such firms. The Iran Telecom Company is a recent example of a large corporation in the process of updating its book value in the aftermath of high inflations in the recent years, while doing so is totally tax-free.

It appears that asset revaluation, on the heels of the dramatic devaluation of the rial in recent decades, needs to be factored in when analyzing a typical company's value. There are some market pundits who tend to interpret a high price-to-earnings ratio as proof of an immediate stock market meltdown. They are partly biased in their analysis, since the price-to-earnings ratio might not single-handedly deflate the gauge's spike.

In the final analysis, taking advantage of the current market boom to offer state and private companies on the stock exchange could undoubtedly enhance market depth. Moreover, it might guarantee the gauge's growth timeline to benefit the whole economy.