Iran’s stock market is recovering dramatically as subsidized exchange rates are reduced, commodities are deregulated and certain prices are brought in line with inflation. 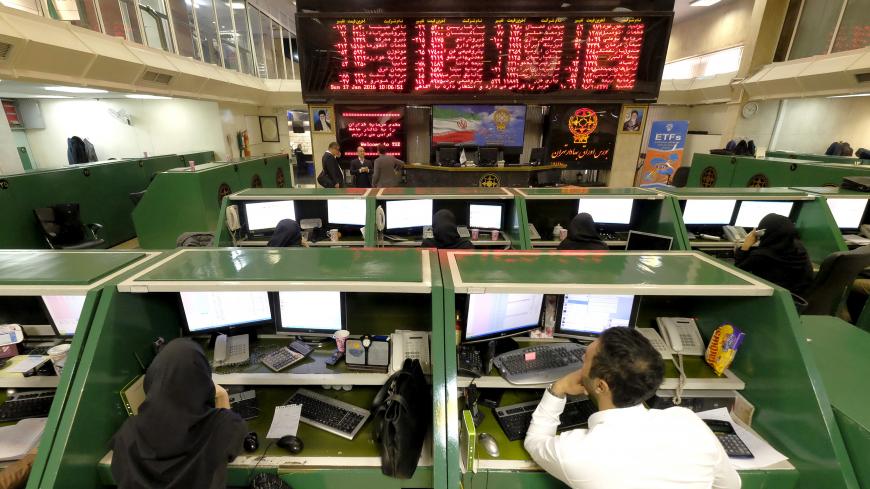 Iran’s stock market has been rallying in recent weeks and months, notching fresh all-time highs. The Tehran Stock Exchange (TSE) Index spiked by 0.07% to close at 278,674 points on Wednesday, its return was a whopping 55.9% according to the report posted on the TSE's website. The recovery is also in line with analysts’ estimates for the benchmark’s rise around 60% over the year, conducted and published by the economic Daily Donye-e-Eqtesad on July 16.

While traditionally parallel markets have the potential to attract idle money in the economy, they have not shown any signs of attractiveness for retail investors over the past few months. The gold, currency and housing markets currently do not enjoy a high profitability outlook for Iranian investors regarding their dramatic spike on the wake of rial depreciation in the previous year.

One point that should not be overlooked giving rise to the gauge’s record highs has been the sizeable change in the composition of bank deposits from longer-term to shorter-term investment horizons, according to the latest report from the central bank for the preceding Iranian calendar year. The stats for the money and quasi-money show that they hiked 46.5% and 19.6%, respectively, year over year. This increase was accelerated partly because of the rise in inflation and the inevitable lowering purchasing power of Iranian households, which were urged to keep their hard-earned savings at hand to spend on daily shopping requirements. Given the low amount of interest paid on long-term bank deposits — 15%, while inflation stood at 42.2% — the immediate availability of cash eased investment decisions for short-term deposit holders, a possibly decisive factor behind the bullish trend in the stock market.

Moreover, hard currency appreciation in the preceding year favorably impacted the TSE Index in two perhaps different stages benefiting domestic firms. First, its unprecedented spike in the course of the preceding year led to the government's decision to eliminate the subsidized dollar rate allocated to a large number of items being imported to a selective slew of essential goods. This move by the Iranian authorities enhanced the nominal sales of the heavy weight commodity-based companies listed on the TSE, constituting almost 58% of its market cap, by burgeoning their income margins. Second, rial devaluations culminated in rampant inflation, providing sufficient fuel for the smaller-cap firms to follow suit as their top-line and bottom-line margins started to jump. This urged investors to rush into buying their shares, pushing their relevant gauge higher and higher in the exchange market. The Equal-Weighted Index, the barometer applied to measure the performance of micro-sized listed firms, has yielded, astonishingly, about 133.3% from the beginning of the Iranian year through Aug. 28, strikingly surpassing the traditional benchmark.

The Purchasing Managers’ Index survey conducted every month by the Chamber of Commerce, Industry, Mines and Agriculture shows that there has been a dramatic drop in the Iranian firm's sales index since last summer and manufacturing space has seen lackluster activity since then. Thus, it can be argued that the major portion of the growth in corporate earnings in recent months sending stock prices higher for the small and medium-sized firms has been facilitated on a larger scale by adjustments for inflation. Those categories that have not yet fully adjusted themselves with inflation will most likely continue their rallies in the equities market. The consumer goods segment, particularly non-durable goods such as food and beverages and laundry detergents, are the industries that stand to benefit most in the coming months.

The subscription of more than 600,000 retail investors in recent Initial Public Offerings (IPOs) has set a new record for the new firms being floated in the capital market of Iran, as the rate was unmatched for more than half a century of TSE activity. Figures indicate that Iranian retail investors are getting more interested in engaging in the market, should the grounds for the money being parked outside the stock market be prepared properly by the market regulators. This can be viewed as a golden opportunity to strengthen market depth and increase its role in the country's economy. Therefore, utilizing IPOs for financing the private enterprises that failed to attract ample cash in recent years is among measures that could help the country's economy grow during the recession.

However, it should be borne in mind that policy-makers not taking advantage of the opportunity or misusing it can pose a serious threat to the market. Extra liquidity, traditionally, has had the potential to spill over to other alternative markets for speculative investment. That said, economic policy-makers can take advantage of the opportunity in the stock market to ultimately offer justice shares. It is fair to say that the fate of justice shares have always been a major challenge to market participants. Generally speaking, market analysts believe that justice shares ownership by amateur investors without proper mechanisms in place could trigger widespread sell-offs across the exchange market. However, the current stock market has the necessary impetus to execute this long-awaited scheme. Employing exchange-traded funds as the viable investment vehicle can help transfer the shares to the designated individuals, being the lower-income earners. The scheme now only awaits ratification by the parliament..

In sum, the gradual elimination of the subsidized exchange rate for items such as medicines, deregulation of commodities including petroleum products and price adjustments in the food and beverages category in regard to the inflation rate are expected to add further fuel to the TSE Index to touch new highs. However, market corrections are likely to be short-lived and not last long during the period.