While the Tehran Stock Exchange has recently reversed its downward trend, fundamental interest rate and exchange rate reform are necessary to maintain the upward momentum. 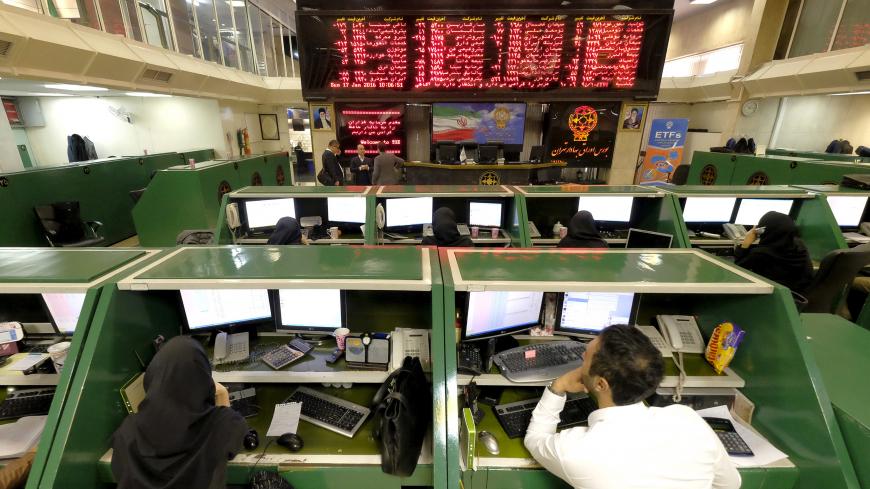 In its 50-year history, the Tehran Stock Exchange (TSE) staged its best performance in the Iranian year beginning March 21, 2013. But by January 2014, it struggled to break or even maintain the record touching 89,500 mark. The bullish breakout occurred some six months after Hassan Rouhani was elected president for the first time. Now, over 3½ years later, the main index is hovering below 84,000.

High interest rates, global commodity price fluctuations and the country’s dual exchange rate regime are occasionally cited as the major causes of the malaise in the volume and value of trading on the TSE. Yet questionable oversight of listed companies is also a major factor.

Given that interest rates on bank deposits are firmly higher than the inflation rate, there is not much incentive for investors to broadly enter the stock market. On the other side of the coin, payment of high interest rates is a key cost to companies that directly impacts profits. Thus, interest rates affect the level of economic activity, which, in turn, squeezes corporate net margins. Even more directly, interest rates heat up competition for funds between stocks and bonds. Higher interest rates mean that investors receive a higher return on their fixed-income investments. High bond yields induce investors to sell their stock holdings and invest in more bonds or bank deposits. High gains from savings accounts and sukuk (Islamic bonds) have thus been one big reason stifling investors’ enthusiasm for considerable stock market participation. This is a long-standing dilemma that hinders sustainable and smooth growth in the equities market for a longer amount of time.

Of note, low liquidity is another malady the stock exchange frequently suffers from in different time periods, particularly before the recent rebound of the TSE. Many financial analysts are of the opinion that low multiples of the money market relative to capital market price to earnings ratio has been the major catalyst behind weak sessions in the stock exchange. This led to a substantially slowed inflow of funds from banking accounts to the TSE. The average yielding rate for Islamic Treasury Bills (ITB), corporate bonds and term deposits exceeding $30,000 currently stand at 23%, 16%-23% and 18%-22%, respectively. Rubbing salt into the wound, a black market has been created for ITBs issued by Bank Melli Iran called "Sakhab." This unregulated bond market was established while the conventional ITB market was blamed for absorbing meager liquidity from the stock market and thus undermining the already feeble TSE. The rate of return in this informal market hovers around a whopping 35%-40%, to the detriment of the TSE and its investors. Under such circumstances, investment in equities loses its priority and gives way to risk-free assets.

Fluctuating commodity prices also exert a tremendous impact on the earnings of the petrochemical sector. The latter consists of 40 firms and constitutes more than 43% of the TSE market value. According to a monthly report posted by the Securities and Exchange Organization (SEO) for the period between May 22-June 21, the 13% fall in the oil prices in the period was responsible for 703 points negative impact on the TSE All-Share Index. The index was impacted by almost 847 in the negative territory when all basic materials were included. However, the recent rise in commodities prices globally eased the pain for players of this sector.

In the same vein, the government’s efforts to limit the movement of the US dollar exchange rate has largely played into the hands of importers rather than exporters of commodities. This policy by the Central Bank of Iran has contributed to the slash in revenues for petrochemicals and a loss in interest for such stocks among investors.

Furthermore, TSE-listed companies’ profits, both in rials and dollars, have disappointedly swerved back to where they were between four and six years ago, respectively. This indicates that these firms are undergoing hard times trying to hit their estimated earnings per share — let alone beating them. Indeed, this is another reason why investors culled their stakes in the TSE in prior months.

In addition, apart from conventional systemic risks that are prevalent in the capital markets, there is one, oddly enough, attributed to the SEO’s actions in the equities market. Although it is an entity exclusively tasked with supervising TSE member companies, its unconventional interventions and interruptions in the affairs of the stock exchange have been met with harsh criticism. To that point, Ali Sanginian, the head of the Money and Capital Commission at the Tehran Chamber of Commerce, Industries, Mines and Agriculture (TCCIM), criticized the actions of the SEO and noted, “The supervisory officials are playing on the ground instead of having the role of referee,” according to IBENA, an economic news network on July 11. He further added that “the [Capital] Market Development Fund (CMDF) was established for the [purpose of] market development but currently the fund is utilized for prettifying the [All-Share] Index.” Sanginian also rebuked the SEO's supervisory structure for its direct and indirect involvement in formulating equities price trends, misuse of the CMDF, extensive block deals, IPO restrictions, halting trading symbols and other restrictive rules.

It is worth saying that the CMDF was primarily set up to be applied as a market making vehicle to stabilize capital market volatility and increase liquidity in the stock market. The underlying objective was to maintain and develop fair competition conditions in the face of financial and economic crises in the stock market: a target that was not materialized in the eyes of financial pundits, discouraging extensive engagement in the TSE.

Indeed, arbitrary mechanisms for disclosing TSE-listed firms’ financial data by the SEO have raised concerns among market players. This has been a risk gradually contributing to the flight of capital from the exchange market. Electricity Meter Manufacturing Company, locally known as SKI, is one notorious example in this regard. The small company was confirmed to reopen its ticker symbol in return for its board of directors’ pledge to absorb any possible losses, without properly examining its forecast financial earnings. This, nevertheless, ended up in a trading halt for SKI and consequent huge losses for mostly retail investors who are not yet aware what might come of their investment after almost a year.

Recent volatility in metal and mining stocks prices and to a lesser degree in oil contributed to the TSE All-Share Index to eventually gather momentum to move up. But the value and volume of trades are not satisfactory yet. For stock prices to spike in the long term, reduction of interest rates, appreciation of the dollar exchange rate and the current advancement of global commodity prices are generally seen as basic prerequisites for a resilient, sustainable growth of the TSE.