Why are Iranian investors shrugging at nuclear deal?

Despite the signing of the nuclear deal between Iran and six world powers, the Tehran Stock Exchange is still far below its levels before negotiations began under President Hassan Rouhani's rule. 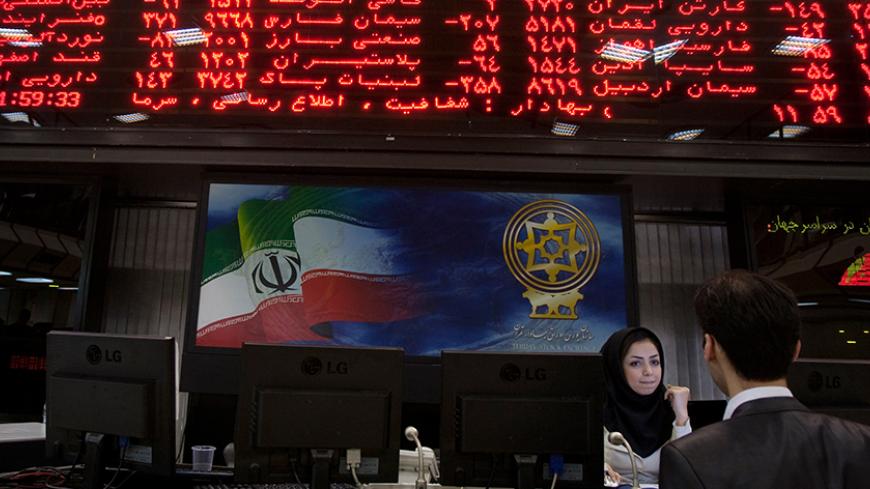 A trader speaks with a stock market official underneath the electronic board at the Tehran Stock Exchange, Sept. 15, 2010. - REUTERS/Caren Firouz

TEHRAN, Iran — The main index of the Tehran Stock Exchange (TSE) rose 221.7 points to hit 61,691 Dec. 30 — the last working day of 2015 in Iran. It has hovered around the same level so far this year, which is far lower than its 89,500 points in January 2013, six months before moderate President Hassan Rouhani was elected.

The stock exchange's main index, TEDPIX, seems to have become numb to seemingly positive political developments. The Joint Comprehensive Plan of Action, which finally ended the 12-year-long nuclear crisis, did not set the index up for a significant rally. Neither did the International Atomic Energy Agency’s recent resolving of the long-running matter of the possible military dimensions to Iran’s nuclear energy program.

Financial experts believe that Iranian stock markets suffer from deep distrust among investors. Indeed, markets have not even reacted to the 10.7% appreciation of the US dollar against the rial in the six months running up to Dec. 30. The government’s recent stimulus package has not helped either.

The market’s apathy can largely be blamed on the global economic downturn. The slump in the prices of crude oil, petrochemical products as well as basic metals and minerals in international markets have all added to the external pressures on Iranian enterprises. Indeed, the economic sanctions against Iran, coupled with slow growth in China — a strategic trade partner of Iran — of late has had a significant impact on the Iranian economy and markets. There are also domestic factors at play. Issues such as the structural problems of Iranian capital markets, policy shifts and falling inflation are all contributing to the current situation.

Added to the mix is the Iranian parliament’s 2014 push to force the Rouhani administration to make significant changes to the price of petrochemical feedstock, which critics argued were unfairly low. Indeed, at that time, when global demand for petrochemicals and metals began plunging, Iranian lawmakers approved a hike in the price of petrochemical feedstock and also a rise in mining royalties — decisions that virtually all financial pundits believe led to the continuous fall in share prices in the ensuing months, given that the majority of market players in Tehran are involved in businesses related to the oil, gas, petrochemical and mining sectors.

Yet, top market authorities are confident that the future of Iranian capital markets will be rosy. In a recent interview with the leading economic magazine Tejarat-e-Farda, the head of the Securities and Exchange Organization (SEO), Mohammad Fetanat, said that officials are planning to decrease the price of petrochemical feedstock in a matter of weeks and provide investors with a 10-year schedule in this regard. The latter would enable investors to manage business risks in a more effective way.

Among other measures the SEO is set to take in the near future is the launch of a foreign exchange derivatives market, a new instrument that both the chairman of the Central Bank of Iran and a board member of the parliamentary economic committee see as crucial to attracting foreign investment. Boosting the sukuk (Islamic bonds) market is key to achieve sustainable development, market officials argue.

However, there is still no official word on structural reform of capital markets. The state structure of markets has so far prevented many companies from being represented. According to Mohammad Reza Rahbar, a former board member of the TSE, only 400 out of 700,000 Iranian companies are represented in the market, with some of these 400 firms contemplating whether to leave the market due to the many constraints, red-tape and shortage of resources. Rahbar believes that among the measures that could revive investor confidence trust is the introduction of a long-term plan by capital markets authorities to give investors insight into how monetary, financial and trade policies will develop in the future.

The dominant narrative in Tehran is that the root cause of the market decline is the very slow economic growth, which is largely due to the credit crunch. A broker at the TSE trading floor told Al-Monitor on condition of anonymity that he believes that global oil prices are key to Iran’s economic growth.

The OPEC basket price currently stands at $35 per barrel, down from well over $100 per barrel in January 2013. Given the external pressures weighing on Iran’s crude exports and the current ban on the transfer of oil export proceeds back to the country, the government’s revenues considerably dropped in the two years running up to December 2015. The TSE broker told Al-Monitor that there doesn’t seem to be any light at the end of the tunnel. He said, “Capital markets will not get healthy in the short run — unless oil prices rebound.”

Indeed, cuts in annual budgets have decreased the number of development projects, reducing the demand for cement, steel, ceramics and other domestically produced building materials. For instance, SEO chief Fetanat says that demand for cement has halved, putting immense pressure on TSE-listed cement companies. In this vein, he suggests that the government should raise at least 1.5 trillion rials ($50 billion at the official exchange rate) in financing through the debt market in the coming Iranian fiscal year — beginning March 20 — to kick off more development projects in an effort to boost real growth.

Hence, as long as real growth in the gross domestic product remains elusive, neither sanctions relief nor a further drop in the rial’s value — nor even an expansionary monetary policy — will result in the revival of stock markets. Mindful that anticipated economic growth during the next Iranian calendar year will come from contributions made by exports of raw materials, investors are not likely to witness a boom in the stock market — at least not in the short run.