What Is Behind Success Of Tehran Stock Exchange?

The Tehran Stock Exchange has been a success in an otherwise stagnant economy. 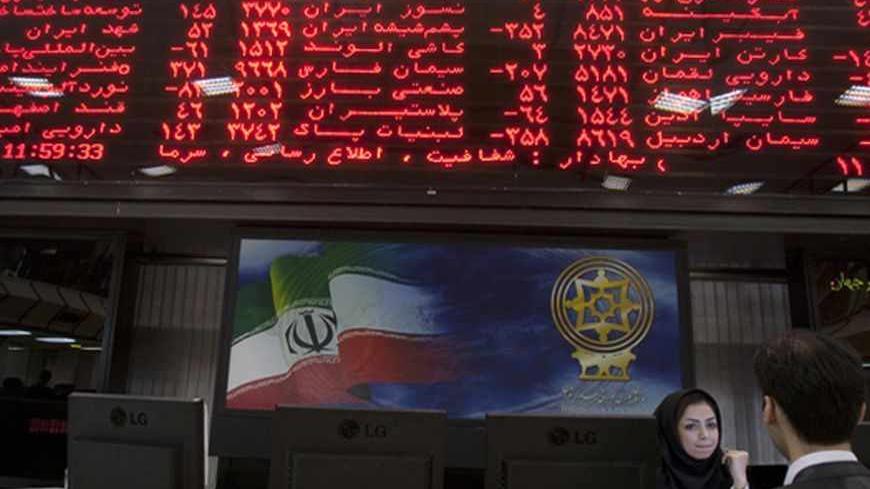 A trader speaks with a stock market official beneath the electronic board at the Tehran Stock Exchange, Sept. 15, 2010. - REUTERS/Caren Firouz

The Tehran Stock Exchange (TSE) has been viewed as a phenomenon in the midst of the declining Iranian economy. The TSE Price Index (TEPIX) currently hovers at about 59,000 — up more than 500% since 2009, about 50% since the beginning of the current Iranian year (March 21) and about 28% since the election of Hassan Rouhani as president (June 14). As the following graph indicates, there are occasional adjustments downward — such as in the days running up to the presidential election on June 14 — however, the overall trend is upward. The question is how one can understand this uninterrupted rise and what factors are influencing this phenomenal growth.

TSE Price Index since the beginning of the current Iranian year

The TSE started its operations in 1966. After the first oil price rise (1973-1974) and along with the increase in foreign exchange revenues, TSE activities increased considerably and the number of listed companies reached 102 in 1978. In the aftermath of the Islamic Revolution (1979) and the Iran-Iraq war (1980-1988), trading in many companies was suspended and turnover reduced to almost zero. Since 1988, the TSE has seen sustained periods of growth in trading and market capitalization, only interrupted by short downturns in 1997-1998 due to an overheated market, and in 2005 due to political uncertainties — following the election of Mahmoud Ahmadinejad. Market capitalization of the 320 companies currently listed on the TSE stood at 2,904,320 billion Iranian rials or more than $115 billion at the currency exchange rate as of Sept. 1. The growth in the number of listed companies is a direct consequence of the fact that most state-owned companies have been privatized through a listing of their shares on the TSE.

It is evident that the TSE’s growth over the past few years and its recent rise do not correspond well with a stagnant economy, undermined by trade and financial sanctions, mismanagement and high inflation and unemployment. Experts disagree whether the growth is a bubble that will burst at some point, or whether it is an indication of a growing capital market.

The factors that have contributed to the TSE developments include the following:

The above list is not exhaustive, and it is mainly meant to show that there are valid technical or financial reasons why investor interest in the Iranian capital market has expanded. There will also be other factors which will contribute to this process. For example, the plan to make the so-called “justice shares” — company shares issued to civil servants and lower income classes in the process of privatization — tradable at the TSE will inject further liquidity into the market.

However, the mere growth of the stock market is not an indication of a growing economy. In fact, the contrast could not be harsher: A fast growing capital market in an economy that may experience a third consecutive year of economic decline. This phenomenon is yet another reminder of the current imbalance that the Iranian economy finds itself in. The imbalance is further aggravated through internal and external tensions and uncertainties, especially sanctions.

Despite the enormous growth, there are also many structural issues and problems in the TSE. Industry insiders complain about the lack of transparency on why sometimes TSE management decides to suspend trading in some company shares. The occasional suspensions make company shares illiquid and work against the interest of small investors. Furthermore, brokers and investors suffer as a result of irregular activities; for example, the fact that most large companies are engaged in investment activity, even though they are not registered as investment companies.

It remains to be seen whether the new government will pay attention to capital market reforms that will be needed to consolidate this important economic phenomenon.  For now, the TSE will continue to benefit from the imbalanced economic and financial realities in the market, but it will also need to institutionalize new laws and regulations to increase transparency and its attraction to big and small investors, even as and when the Iranian economy finds a new balance.